Saint Arnulf lived in the sixth and seventh centuries, and has a significant role in the history of the Merovingian period at the time just before the Carolingian period.

Arnulf of Metz was born about 580. He was apparently of a noble line, and was educated in both military and governmental matters. Although his lineage is not certain, it is probable that points to Clovis. His story is quite interesting, although not widely known.

Arnulf is the German spelling, and information can also be found under Arnoul of Metz, the French spelling. The franks were Germanic, and the area is now part of France. This small corner has changed hands in the past.

Arnulf was first educated in matters of the court of King Theodebert II of Austrasia. He served so well that be became one of the king’s ministers. He also became a military commander, so his service to the king was of multiple facets. His service did not end with Theodebert’s death.

One aspect of his life often omitted from short sources is his simple life and his use of his wealth to give alms to the poor. This is found in “The Lives of the Fathers, Martyrs, and Other Principal Saints.”

Arnulf desired to become a monk, and planned to move to a monastery. His friend Romaricus had started a monastery, and he would likely have joined him earlier, except there were other needs.

Arnulf married Doda, also called Dode, and had two children.  His wife was of nobility, and her lineage traces also to Rome through the Gallo-Roman senators.  His family included two sons, Anseghisel and Clodulf.

Arnulf lived in the Merovingian period, and his grandson, Pepin of Herstal is considered to be at the beginning of the Carlovingian period.  This group is also called the Pepindes.

His Service to the Catholic Church

In those days it was not uncommon for priests to be married.   He was needed to become the Bishop of Metz, and he accepted the position.  And, the bishop was of high importance in a royal court.  His wife, Doda, became a nun.

In due time his son Anseghisel married Begga, a daughter of Pepin of Landen, and fathered Pepin of Herisal.  This line leads to Charles Martel, Charlemagne, and many leaders who followed.

His son Clodulf would later become Bishop of Metz, and is now known as Saint Cloud.

Arnulf was concerned with some of the things he saw going on in the court, and after finding a successor as bishop he left to live as a monk. Or as one source states, a hermit.  His wife had started a convent, and both were content to serve God through their callings.

The Legend of the Ring

One manner Saint Arnulf is often depicted is holding a fish with a ring in its mouth.  The significance of this is that Bishop Arnulf, upon learning of some of the deeds of the nobility that he served, became concerned he might have offended God.  He tossed his bishop’s ring into the river and asked God to return it as a sign of forgiveness.  After five years a fisherman brought a fish for his table, and the fish contained the ring.

Saint Arnulf is one of the saints, along with Saint Jude, to whom people pray for assistance with finding lost items.

The Legend of the Fire

The legend of the fire is that there was a fire in the castle that threatened the town.  Arnulf stood before the fire and prayed, offering himself if God willed it.  The fire went down immediately.

The Ties to Brewing

Saint Arnulf is the Patron Saint of Brewing

In the dark ages disease was common.  He advised the people to drink beer instead of water for safety, and the water carried disease was eliminated as a problem.

In another legend the people of Metz went to bring his body home the year after he died.  The body was exhumed, and his remains were brought back to Metz.  The legend associated with this is that the summer heat was having its toll on the group, and a tavern found along the way had but one mug of beer.  Yet all were able to drink and the party made it home with his remains.

The Joseph of Arimathea Legend

I found a claim in the book “Saints Who Left Descendants” that he was a descendant of Joseph of Arimathea.  I find this sketchy, but it is repeated elsewhere.  Of the legends, this one I do not believe has merit.  But, it is interesting, and you have a right to decide for yourself.

The legend has Joseph of Arimathea being an uncle to Mary, and hence would have a line back to David.  The rationale is that Jesus’ body would have been released only to a relative.  And, Joseph of Arimathea was apparently of means, so there is speculation he was a merchant, who later traveled to Europe and eventually to the British Isles.  I find this an interesting tale, but place no value in it, especially that Clovis comes from this line via Anna, Joseph’s daughter.

What Is My Interest?

As I search back through my ancestors, one branch was remarkably easy to follow.  It went through England, then a branch went to Charlemagne, and eventually back to Saint Arnulf.  I may have made an error, but to my best knowledge I may well be a direct line descendant.   And, I believe this allows me to consider Saint Arnulf a family saint.

There seem to be two groups of books on Amazon, but none are in English.  There are German and French books available, making it difficult to get back to extended sources.

I had few sources a few years ago, but now more is finding its way to the internet.  The three legends seem to be found in multiple sources, as are other facts.  So, as a citation I give these.

The Lives of the Fathers, Martyrs, and Other Principal Saints, Butler, rev. Alban found in Great Books Online at http://www.bartleby.com/210/7/183.html

This article contains links to affiliate programs from Amazon and Adsense advertising.  These must use cookies to allow for proper crediting.

One line was well documented by those who searched before me.It was just past my great grandfather that I could tie into the line.

How remarkable that you were able to trace your lineage back so far, and come upon this uncommon connection! 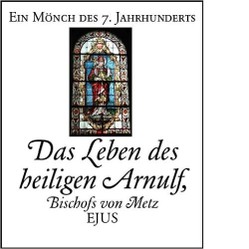 1001 Nights, for many more known as Arabian Nights is one of most popular collections of fairy tales of all times. But in its original form it is not appropriate for kids...
62%  20   3 blackspanielgallery
History