Schubert: The Genius Who Composed the Unfinished Symphony

Schubert was one of the great Romantic composers, who was especially famous for his songs. Often underlying his lyrical melodies was a characteristic melancholy.

Whether you are listening to one of Schubert's well-known "Lieder" (songs) such as "Erlkönig" (The Elf King), to one of his symphonies (such as the Unfinished Symphony) or chamber music, you will be captivated by this composer's expression of Romantic emotion embedded in pure melodies.

Franz Schubert was born in Vienna, Austria, in 1797. His father was a schoolmaster and Franz was the twelvth of fourteen children in the family.

Having showed great musical talent from an early age, in 1808 Schubert, then 11, joined the chapel choir school that trained singers for Vienna's imperial court.

In 1813 he left the school and began composing. In the following year, he started teaching at his father's school to earn a living -- while at the same time continuing his composing. In 1816 he stopped his school teaching for a year. After that, he became a music master in the household of Count Esterhary in Hungary.

In these early years Schubert composed an opera, some masses, and the first of his Lieder (songs for solo voice with accompaniment, often on the piano), such as "Gretchen at the Spinning Wheel", "Erlkönig" (Elf King), "Heidenröslein" (Hedge Rose), "To the Moon", "Kennst du das Land?" (Knowest Thou the Land?), and "The King of Thule". These songs -- more than 600 in all -- were often music settings for verses from great writers such as Goethe, Schiller, Heine, Klopstock and Shakespeare.

Together with the operatic baritone, Johann Michael Vogl, Schubert set the Scubertiaden, private and public concert parties and receptions where he performed his songs.

He also wrote much other music for the piano, including sonatas and dances, and much chamber music.

For much of his life Schubert was not well off financially -- in fact, he led a "hand to mouth" existence. He never married. However, he was a sociable and convivial person surrounded by many friends for whom he often sang and played.

In his later years he also suffered ill health and failed to obtain paid positions. However, he did receive some recognition and was able to meet Beethoven, who admired his work. He died in 1828 of typhoid fever at the young age of just 33 (it is said that he was the shortest-lived of all the great classical composers, living a shorter life even than Mozart who died at age 39).

Including: Piano quintet in A (The Trout Quintet)

Including: 3 Marches militaires; the Grand Duo; Fantasia in F Minor

plus: many song sets and individual songs (some which have been mentioned above).

The Heritage of Franz Schubert

Schubert wrote within the Viennese tradition of Haydn, Mozart and Beethoven. With Schubert this tradition was to reach its zenith.

He brought a great gift of melody to his works.

Schubert was described by Franz Liszt was "the most poetic of musicians". Schubert's lyricism -- as seen in his more than 600 songs -- has never been bettered. Under him the song as an art form reached its full flowering. He was the creator of the 19th century Lieder tradition.

Schubert influenced such following composers as Bruckner and Mahler.

Masako tries to lift Yuzo's spirits by summoning the illusion of a live orchestra before him...

Schubert on the Internet

Franz Schubert Quotations
What Schubert said and what people said about him.

Schubert Society of the USA
Articles on Winterreise and other Schubert topics.

Brahms: The Genius Who Composed A German Requiem
In his personal life Brahms was a solitary figure who never married. But in music he was a master and one of history's greatest composers of symphonic music and songs.

Wagner: The Genius Who Composed Tristan and Isolde
Richard Wagner was a great German composer of the 19th century. He wrote a number of magnificent operas, such as "Tannhauser", "Lohengrin" and "Tristan and Isolde".
Updated: 05/21/2015, DavidPaulWagner
Thank you! Would you like to post a comment now?
3

Yes, John, what a great combination: a Kurosawa movie and a Schubert symphony!

I love the Kurosawa video! 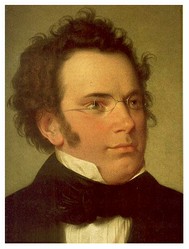