Sex on Wheels: Channel Four documentary looks at the sex lives of people with disabilities

For people with disabilities, sex can be frustrating and heart breaking. This Channel Four documentary looks at how four people are overcoming their problems.

Sex is a normal, healthy part of most people's lives, and that includes people with disabilities, as this Channel Four documentary discovered. Starting on Thursday 9 May 2013, the three-part series looks at the lives of four people trying to overcome their difficulties to have an enjoyable sex life.

For many people with disabilities, having a healthy and fulfilling sex life can sometimes be challenging. Channel Four looks at the problems of four such people in Sex on Wheels, a three part documentary starting on Thursday 9 May 2013.

The film also follows the work of Laura Lee, an escort who specialises in working with men with disabilities. She is proud of what she does and sees herself as providing a unique and necessary service to those who might struggle to have an ordinary sexual relationship.

There are more than ten million people living with disabilities in the UK and 85 per cent of them are sexually active.

Episode One of Sex on Wheels

Narrator Holly Aird guides us back and forth between the show’s stars in this sexually explicit programme. Leah says she wants a husband but often just wants to get laid. What’s the strangest place she had sex, a friend asks her. “In a car in a retail park,” she says. And is she worried that a partner might injure her? Not at all. “I’ll tell you if something is going to break,” she says. “Just get on with it.”

Virgin John is lonely and his mother is heartbroken for him. She contacts a friend with cerebral palsy to help her find her way into the world of escorts, and hires Laura Lee. Lee specialises on people with disabilities. “These guys live in a very lonely and isolated world,” she says. “I can make them feel special.”

Karl is struggling with his erectile dysfunction. “I feel like a virgin again,” he says. He attends a clinic aimed at helping him find alternative sexual fulfilment but can’t get over his focus on having an erection. After a failed attempt at using drugs, Karl tries a sacred sexual healer.

Team behind Sex on Wheels

Sex on Wheels was a Firecracker Films production for Channel Four. The executive producers were Emily Shields and Jes Wilkins. Emma Young was both producer and director.

Hi this article is very help full for sex.. 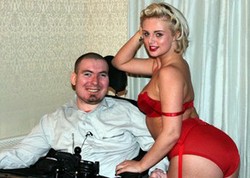