Sebastian Vettel is building a commanding lead as the drivers head for round thirteen of the Formula One racing championship in Singapore on Sunday 22 September 2013.

The exciting night race that is the Singapore Grand Prix provides the next test for the Formula One racing teams on Sunday 22 September 2013. The race take place in the wake of the news that Kimi Räikkönen is to leave Lotus for Ferrari next season; this year already Ferrari is more than 100 points behind Red Bull in the constructors championship.

Sebastian Vettel will be trying to make it three wins in a row as the Formula One racing teams head for the night race that is the Singapore Grand Prix on Sunday 22 September 2013. After being victorious in Belgium and Italy, Vettel now has six wins under his belt and leads the world championship by 43 points over his nearest rival, Ferrari’s Fernando Alonso. Vettel’s win also mean Red Bull has extended its lead in the constructors championship to more than 100 points.

More important than the points lead is the comfort with which Vettel won the two most recent races. Red Bull are traditionally stronger in the second half of the season and are showing it in style. Even though Alonso had a respectable second place in Italy, overall his car is just not fast enough to provide a serious challenge to Vettel’s lead.

The big battle now in the constructors championship is for second place with just three points separating Ferrari and Mercedes. But Mercedes will have to do a lot better than they did in Italy with Nico Rosberg and Lewis Hamilton only managing sixth and ninth, respectively.

The big surprise at Monza was a fifth place for Sauber’s Nico Hulkenberg. The fading Lotus team saw only one driver in the points – Romain Grosjean in eighth – with lead driver Kimi Räikkönen struggling in eleventh. Jenson Button added a solitary point to McLaren’s poor total with a tenth place finish.

Night races always seem a little bit more spectacular, and Singapore delivers the goods as the drivers negotiate the streets around Marina Bay under floodlights that are not totally perfect; shadows on the track can put off the drivers. The timing means that European television viewers get to see the race in its normal early afternoon slot. As a result, many of the drivers stay on European time for the two weeks leading up to the race.

Slow-speed corners will increase tyre wear and there are walls close to the track, testing the nerves of the drivers. With the heat, humidity and a bumpy track, the race becomes a test of endurance as well as skill. Effort has been made to smooth out some of the bumps this time, but probably not enough to have a significant effect.

This has in the past been one of the longest races on the circuit, often pushing the two-hour mark. But this year, the layout has been modified to speed up lap times and hence reduce the overall race length. The big change is at turn ten where the Singapore Sling chicane has been removed and replaced by a simple left-hand bend.

There has also been a change in tyre policy as Pirelli desperately tries to rescue its reputation. Last year it went for the supersoft and soft. This year, the supersoft stays but will be backed by what the company hopes will be the longer lasting medium. This is also partly due to the tyres being softer overall this year.

The biggest news this week has been the confirmation that Kimi Räikkönen will be leaving Lotus to join Fernando Alonso at Ferrari next season. How the two will get along remains to be seen after it was Alonso’s appointment four years ago that saw Räikkönen being shown the door by the Italian team. This time it is Felipe Massa who leaves to make way for Räikkönen and the rumours are strong that it could become a straight swap with Massa taking over the vacant seat at Lotus. He is though under strong competition from Sauber’s Nico Hulkenberg. Massa, meanwhile, is also courting McLaren, which has yet to confirm whether Jenson Button and Sergio Perez will hold their seats for next season.

Räikkönen isn’t the only person to be moving from Lotus to Ferrari. Technical director James Allison has already made the move and now Lotus’ aerodynamics expert Kirk de Beer is also due to go, to be replaced at Lotus by Ferrari’s Nicolas Hennel. And Räikkönen may decide he wants to take his race engineer Mark Slade with him when he heads for Italy.

Wireless technology company Qualcomm has announced a multi-year agreement with Formula E Holdings (FEH) to become an official founding technology partner of the FIA Formula E Championship, the new international championship featuring racing cars powered exclusively by electric energy. The agreement will allow Qualcomm to advise FEH on incorporating more sustainable technologies into the racing series. As a start, Qualcomm Halo technology will be adapted to be fitted into the 2014-2015 safety cars so they can be wirelessly charged. 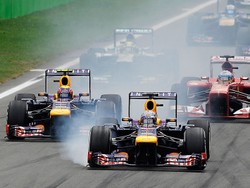