Song in the Silence is the first book of the Lanen Kaelar cycle, a female-lead fantasy trilogy.

The Tales of Kolmar are one tale: the Tale of Lanen Kaelar

Lanen Kaelar calls herself the wanderer, but until after her twenty-third birthday she was merely Lanen Hadronsdatter, tied to the farm of her father Hadron, a horse breeder and dealer. When Hadron dies, however, suddenly Lanen finds herself a woman of means, and she means to use it to fulfill her childhood dreams of wandering the world.

And she's going to start with dragons.

Little does Lanen know what her perilous trip to Dragon Isle will mean for herself, for the Dragons themselves, and for all of humanity. For Lanen, unknown to herself, is a child of prophecy and is desperately sought by forces vying for power in the world of Kolmar.

Book One Synopsis: Song in the Silence

When Lanen finds herself suddenly free and with the wide world before her, she immediately decides to fulfill her lifelong dream of meeting and talking with a dragon - a True Dragon, not one of those little beasts the size of cows that wander Trollingwood Forest, with limited flight and less intelligence. True Dragons, the size of a house and the stuff of legend; real dragons that only live - perhaps - on the tiny, far away, and normally unreachable Dragon Isle.

Dragon Isle is the only source of the coveted lansip leaves that restore health from any ailment except death itself. No wonder that every ten years, when the ferocious storms that make the seas impassable abate just a bit, there is always a ship ready to undertake the journey, and hands ready to sign on for the dangerous journey. No ship in almost one hundred years has returned, however, though one has left every ten years; and the tales of the talking dragons that inhabit the island are now dismissed as mere legend by many.

But Lanen's ship makes it past the dreaded storms and finds safe harbor on Dragon Isle, where they are indeed met by a True Dragon, the Guardian of the Boundary beyond which the humans may not pass. Lanen is drawn irresistibly to the Boundary under cover of dark, to speak to a Dragon - and finds a kindred spirit in Akhor, to their mutual joy. Despite their disparate species, sizes, and lifespans, a bond between them develops rapidly, until they find themselves pledged to one another.

But their newfound devotion is plagued by more than the laws of their peoples forbidding any contact except across the Boundary. The ship has brought not only workers to harvest the lansip, but Marik of Gundar, in league with the Demonmaster Berys. Together they have plans to secretly plunder the dragon's most precious treasure, and along the way sacrifice Lanen herself to the demons, the life-enemies of the dragons.

For Lanen's father was never Hadron, the horse-master who raised her; but Marik, who willingly pledged the life of his firstborn child in exchange for an object of great power and must fulfill his vow at any cost.

A Note About Versions

Warning! The mass market paperback of Song in the Silence for sale new at Amazon is an abridged (shortened) version. Please find a used unabridged copy, or find it at your library, or get the Kindle version. (The link above is to the unabridged Kindle edition.)

As far as I can find, there is no printing that puts all three books into one volume.

A very brief non-spoiler synopsis of the second and third books.

Without spoilers to the first book, I can tell you that Lanen and Akhor (now called Varien), must face many perilous travels in their personal quest to restore the Lost Ones: the small, cattle-like dragons that live still with humans, who lost their voice and reason thousands of years ago at the hands of a Demonlord who reduced them to animals. The True Dragons, or Kantri as they name themselves, abandoned Kolmar and humanity after that tragic event and retreated to Dragon Isle.

As they fight to find a way to restore the Lost Ones to true status as Kantrishakrim again, they are still pursued by Marik, who needs to fulfill his vow to sacrifice his own daughter to the demons, and Berys, the Demonlord in league with Marik, who has dark purposes that even Marik does not suspect.

Things to Love About the Lanen Kaelar Cycle

Song in the Silence was Elizabeth Kerner's first published novel.

1. Dragons. The dragons in this story are not evil, nor are they animals. They are one of three intelligent kinds from the beginning, long-lived and wise, natural teachers of men until the Day Without End when the Demonlord killed or changed so many Kantri into dumb animals. A story where the dragons are an integral part, and are fully-fleshed characters themselves, is refreshing.

2. Lanen Kaelar. Lanen is undisputably the heroine of this book. She is also a stubborn, impulsive, and sometimes irrational dreamer, who is entirely too likely to cast her sword aside so she can swing with her fists when the chips are down. Lanen is completely human and as such is one of the strongest female leads in any book I've ever read.

Book Three of the Tales of Lanen Kaelar

I have personally read this series at least three times.

Lanen is one of my favorite female lead characters. Here are some other favorites of mine!

Strong Female Characters in Fantasy Literature
I love a good book where the female lead doesn't always wait around for the male lead to rescue her. These are some of my favorite strong female book characters!

A Word to Parents

This is a good series for teens and adults.

This is a good series for older kids and for adults.

There is no foul language except a rare "damn." There are a few references to sexual relationships but they are very much in passing; nothing of a sensual nature is described or detailed.

There are two things that may concern some parents as occult dealings.

1. There are demons in this story, called the Rakshasa, and they are pure evil and dedicated to chaos. Humans may call upon them with the aid of protective devices such as chants, spells, drawn symbols, etc. The caller may sacrifice blood or even a life to the demons in payment for something the demon can do. A large part of the story is the attempt to kidnap Lanen so she may be sacrificed herself.

2. The dragons, or Kantri, are born with gems in the middle of their foreheads. These soulgems, as they are called, enable them to communicate telepathically. They are also retained by the Keeper of Souls after the dragon dies, and in times of need the Keeper may call upon and communicate with the dead dragons through their soulgems.

This book was really good. I think that it won't be so much for preteens. teens and young adults more likely. There are some very sensual parts in the beginning of the second book and throughout the last two books

I cannot believe I missed this trilogy in all my fantasy/sci fi reading! wonderful synopsis

Oh I'll have to show these to my husband who enjoys sci-fi fantasy! Thanks!

Song in the Silence sounds like books I will be recommending to my teen. Thanks for the intro. I also love the shirts you have featured here. Many I hadn't seen before - love your new designs.

I also like to see strong female leads in books, including fantasy novels. And my two sons (in their 20's) are not adverse to reading fantasy books with female leads. I think we'd all enjoy these books.

I love fantasy books, too! I think I'd enjoy perusing your home library. ;-)

Song in the Silence looks like a great series for a preteen! 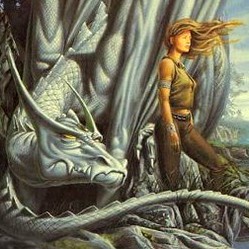