This is a review of the play with an analysis of the production news, and media reviews.

Spider-Man has been a comic book favorite for many years, and this ambitious production brings the excitement of Super-heroes and Super-villains to the stage! With fantastic staging, stunning aerial stunts, and great music, Spider-Man: Turn Off The Dark is great fun for the whole family!

How Does That Work?

The concept of a play about a hero that swings from webs hundreds of feet above the streets of New York is ambitious to begin with. How you put together all of the hardware and trained staff to do this safely in a believable way night after night is a daunting task. Add to it singing and dancing, and you have something that is really spectacular.

The producers of Spider-Man: Turn Off The Dark have managed to pull it off. What they have put together has been controversial, but it certainly is thrilling. The production has set records with the cost of production and the length of time it was in rehearsals. Accidents with actors during the aerial scenes certainly haven’t helped get it off the ground, but it has made headlines.

When the reviews of the first dress rehearsals hit the media several months ago, the show as originally envisioned by Julie Taymor, the creator of the visually stunning The Lion King, was described as being “like watching the Hindenburg burn and crash.” The plot was described as being fragmented and hard to follow. Some of the central characters, such as the Goddess Arachne, were seen as not needed and confusing to the story. The production was suspended for 3 weeks while the script was reworked from the original to one designed to be less ethereal and more family friendly, and new directors, Philip William McKinley — a director whose credits include several versions of Ringling Brothers and Barnum & Bailey’s “Greatest Show on Earth” and Roberto Aguirre-Sacasa, a writer of both plays and comic books, were brought in to put it in practice. The dismissal of Taymor, a Tony Award winning director and set designer, was very controversial and has resulted in a court battle.

Why You Should See It

That hasn’t stopped the production from swinging forward, however. The reworked production opened on June 14, 2011 to mixed reviews. The physical demands of the lead role of Spider-Man require that two actors share the role on alternating nightly performances.  The characters are what you'd expect from a Spider-Man story: Peter Parker is a geeky kid with wonderful new abilities. His singing voice is described as "scruffy" and his character has "heartthrob charm". Patrick Paige steals much of the show as the thoroughly evil Green Goblin, crowing at one point that “I’m a $65 million circus tragedy. Well, more like 75 million.”Joe Dziemianowicz of the New York Daily News says "(Patrick) Page, who has played the Grinch, knows nasty. He tackles the Goblin with campy gusto and an inexplicable mint-julep drawl."

The show is what you would expect from comic book fare. While not earth shattering theater, Spider-Man tickets are good, solid family fun.

Who Is Your Favorite Villain?

Book of Mormon Cheap Tickets
See one of the funniest shows on Broadway! Tickets are available!

Discount tickets for How to Succeed In Business
One of the most successful shows in Broadway history is in revival again, starring Nick Jonas of "The Jonas Brothers Band". Don't miss it!

Spider-Man: Turn Off The Dark Stuff

The Book Of Mormon is jokingly called "God's favorite musical". The Book of M... 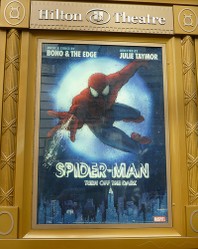 Song of Spider-Man: The Inside Story of the Most Controversial...
23%  1   3 Chrisbyron1
Broadway