Florida's St. Augustine Light is one of many lighthouses that's found its way to home decor pieces. Find some great pillows, and learn a little about the famous beacon, too.

While many of us don't give lighthouses even a passing thought, there are others for whom lighthouses and their history are absolutely fascinating.

If you are, or know, one of those people, you understand! And finding or receiving a special throw pillow with a lighthouse on it is a thrill for a lighthouse lover. But, what's even better is one with a specific beacon on it. Best of all is knowing something about the history of the lighthouse pictured on your pillow.

The present St. Augustine Light, and those that preceded it on the same site, have signaled mariners for over three hundred years. Of the lighthouse pillows shown on this page, several depict it, one of Florida's finest beacons. It stands in the city that we in the Sunshine State proudly proclaim as the nation's oldest city.

So, come. Let me share with you a little bit about the St. Augustine Light, and a few appealing lighthouse nautical throw pillows, too.

A Disappearing Part of History

Through the ages, mariners on ships tossed by stormy seas rejoiced at the sight of a lighthouse beacon which would guide them past deadly hazards to safety.

The St. Augustine Light sits off the coast of St. Augustine, Florida, on Anastasia Island.  It was erected in 1874 in the same place where earlier watchtowers and lighthouses had been, since the late 1500's.   (The city was founded in 1565.)

The present tower was built to replace one that was slowly eroding.  Finally, in 1880, It happened.  It disappeared into the sea..

Thankfully, the new one had already been built.  Today, at low tide, you can still see some of the stones from that previous tower.

The head keeper from 1879 - 1899 was William Harn, a retired Civil War major.  Interestingly, it is reported that Maj. Harn and his wife regularly served lemonade to lighthouse visitors.  They were probably happy to have someone come calling/

Modern conveniences came slowly to the St. Augustine Light:  The keeper's house got indoor plumbing in 1907, and electricity in 1925, but it wasn't until 1936 that the light itself became an electric one.

The St. Augustine Light in 2013, CC via Wikimedia Commons

Damagead by Arson In Modern Times

In 1955, the light in the tower was finally automated, meaning the beginning of the end for the faithful lighthouse keepers.  By the 1960's, automation meant there was no need for keepers of the light at all.  The keepers house became a rental house for a number of years before it was heavily damaged by arson.

Thankfully, a civic organization finally rescued and restored this piece of history - including its lens and automated light.

Today, not only is the St. Augustine Light still shining, and on the National Register of Historic Places, but it even serves a second  useful function.  It's an official NOAA Weather Station!

LAMP (Lighthouse Archaeological Maritime Program) carries on exploration and study of historic shipwrecks and other historical endeavors.  As a Smithsonian Associate, quality children's educational programs are conducted at the lighthouse, as well.

Yes, it's indeed a happy ending for this beacon!

When You Visit the Nation's Oldest City

Be Sure to See the Light

St.  Augustine, Florida, which bills itself as "the nation's oldest city," was established in 1565 by the Spanish.  It's been continuously inhabited since.

Millions visit the city each year, and most come away absolutely enchanted with what they discover there.  However, only a small portion of those visitors make it across the Bridge of Lions to Anastasia Island for a visit to the lighthouse. It's a bit of a hidden gem!

It's open to the public, but there is an admission charge.  You can even climb the tower, provided you are at least 44" tall.  Various guided tours are available, including a Ghost Tour, one about lost ships, and two others.

Have You Been to St. Augustine?

Did you see The Light?

The staircase leading to the top of the St. Augustine Lighthouse Tower has 219 steps

In this fascinating video tour of the St. Augustine Lighthouse and Museum, you'll find out what it was like to be a lighthouse keeper in years past, and enjoy the view from the top of the tower.  There's also quick and informative walk through the museum, and a look into the keepers' residence.

Two Other Beacons that are Landmarks

One in Florida, The Other in Wisconsin

Are you ready to visit the St. Augustine Light? Or enjoy a picture of it on a pillow?

CruiseReady, Are there any depictions or descriptions of the previous lighthouses? My favorite of all the lovely product lines is the staircase on the pillow case.

They work really well on throw pillows, don't they, blackspanielgallery? And lighthouses are such a must for a nautical decor, too!

I would never have though of a light house on a pillow.

The highest and tallest lighthouses in the state of Florida, where they are, ... 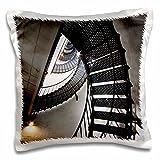 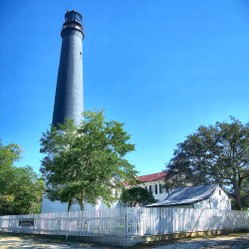 The highest and tallest lighthouses in the state of Florida, where they are, how to see them, and some fascinating facts about them.
63%  8   6 CruiseReady
Pillows and Throws

Sea birds are a beautiful element in a nautical or coastal decor, and throw pillows are one of the easiest ways of all to incorporate their natural beauty into your own decor.
Loading ...
Error!