Sea birds are a beautiful element in a nautical or coastal decor, and throw pillows are one of the easiest ways of all to incorporate their natural beauty into your own decor.

Venture near the seashore, and you’re sure to encounter a few sea birds. Artistic renderings of birds who live near the sea are a natural and beautiful element for any nautical or coastal decor. Sea birds nautical throw pillows are among the quickest, easiest. and most affordable ways to incorporate these fascinating creatures into your home decor.

Pelicans, Sea Gulls, Terns, and Sandpipers are found at seashores the world over. So, you'll want to find one of more of them to add to your home's nautical decor.

So, think nautical, think natural, think sea birds. But, you don't have to travel to the beach or a sea port to see them. Just venture into your living room, den, or bedroom, where you have artfully placed a Sea Bird Nautical Throw Pillow or two in plain sight. It's a sight that will be sure to please.

To give you some ideas, this page highlights a handful of lovely pillows from the artists of Zazzle. You'll also find along with them a little bit of fun information about the birds featured on them.

These Clever Birds Are Found on All Seven Continents

Though most of us use the term 'Seagull' for these birds, the proper term is just 'Gulls.'

Not all gulls spend their entire lives at the shore, or flying over the ocean.  For example,California Gulls live at Utah's Great Salt Lake, and the Grey Gull, of Central and South America, flies inland, to Chile's Atacama Desert, for breeding!

With over 50 species world wide, there is quite a wide variety and range of gulls, and they can be found on all seven continents.  Yes, even Antarctica, where some of them go to breed.

These birds are clever and adaptable, and feed in any manner that will get them food.  They even steal freshly caught prey from other birds and animals.

They can catch prey or food in mid air.  When we were kids, we used to save old bread for the birds.  It was great fun to throw a pieces up and watch the gulls catch them in the air.

And if that isn't enough, they are cunning in catching their food, too.  The Herring Gull actually goes 'fishing' like we do.  They have been observed using food bits, like bread, as bait to catch small live fish.

Are Found Around the World

Another sea bird that's found around the world is the ubiquitous family of sandpipers. which also includes birds that you may know as snipes, curlews, woodcocks, and godwits.

They don't particularly like the desert or Antarctica, so those are two places you won't find them.  Where you will find them is along just about any shoreline, where they forage for food among the washed up seaweed and sand.

Many species of these little birds have quite long legs, which can go like crazy. (Some, like the Turnstones shown above have shorter legs.)

You may have seen a group of them on the beach, running together from an incoming wavelet. It almost looks like a, film that has been sped up. (A short video follows)

The smallest ones are the Least Sandpipers, that are less than five inches long. Even the biggest ones are still fairly small birds.  Those are the Far Eastern and Eurasian Curlews, which grow to just over two feet long.

Have you ever seen a small bird running through shallow water, with its beak partially submerged?  If so, that was probably a shank, also a member of the sandpiper family.  He was fishing for his dinner.

Sandpipers Running To and Fro

In Response to Incoming and Outgoing Wavelets

Although they are often caricatured in a humorous manner in drawings and animation, pelicans are some of the planet's most fascinating creatures.

Of the eight worldwide species, six have white or pale plumage.  The Brown and Peruvian Pelicans are the exceptions.

The Australian Pelican has the longest bill of any bird in the world - over a foot and a half long.

They like fish for dinner, along with other small sea creatures.  Some species will hold a sort of a 'hunting party' for food.  A group of them will gather in a semi circle or line, and flap their wings on the surface of the water.  Thus, they 'herd' schools of fish into the shallows and scoop them up in their roomy pouches.

Those pouches are NOT for storing fish, as some will tell you.  They are simply for scooping up large quantities of water, which will contain their prey.  The water is then drained off, and the fish swallowed.

One species, however, is a real areal acrobat. That's the Brown Pelican.  They 'plunge-dive' to catch their dinner.  It's fascinating to watch, and I enjoy seeing them do it.

Though their bills and pouches are huge, their tongues are very small.  This makes it easier for them to swallow large fish.

At only about 3.5 feet long, the Brown Pelican is the smallest species.  But their wingspan is still in the six foot range.

The Dalmation Pelican is the largest.  They grow to six feet long, with wings that span nearly ten feet.  They are also the rarest, with a conservation status of "Vulnerable."

The Perfect Pelican Pillow for a Man Cave

Pillows with Sea Terns on Them

Terns used to be thought of as part of the gull family of birds, but that is n longer the case.  Non scientists can look at their bills and tails to distinguish them from gulls.  Their beaks are generally longer and more slender, and they have forked, rather than fanned tails.

As to these sea birds being terrific flyers - that may be an understatement, particularly in the case of the Arctic Tern.  These migratory creatures fly thousands and thousands of miles each year, but the Arctic Tern must hold some sort of record.  They migrate literally from one end of the earth to the other, following summer and daylight year round, from the Arctic north to the edges of Antarctica.

A Little More About Terns

Which is YOUR favorite of the birds featured on this page?

@happynutritionist - Runny birds is a great name for them. I love to watch them skittle around... such a hoot!

What a beautiful selection of pillows and great information about sea birds. My mom used to call the sandpipers "runny birds".

Oh, and thank YOU. Did you know that there's even a monument to the sea gull in Salt Lake? It's quite a story indeed.

Thank you, MBC. Not, not a birder, just a fan of anything connected with the sea.

Very well written. Are you a birder?

Well, I have several Zazzle stores, and collectively, they have quite a few items. But other Zazzlers have far more than I. But only three of the pillows featured on this page are mine. Thanks for visiting!

The birds are so photogenic. You must have a large Zazzle store.

Florida's St. Augustine Light is one of many lighthouses that's found its way...

Florida's St. Augustine Light is one of many lighthouses that's found its way to home decor pieces. Find some great pillows, and learn a little about the famous beacon, too.
51%  4   6 Auntie-M
Pillows and Throws 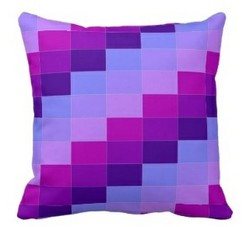 Splendid shades of purple pillows from pale lavender to bold wine colors -- they all combine so beautifully with greens, blues, ecrus, and so much more!
Loading ...
Error!