St Botolph's Without and All Hallowsby the Tower

There are some wonderful churches in the City of London, if you have time to search them out and take a look. Two of my favourites are St Botolph’s Without and All Hallows.

There are some wonderful churches in the City of London, if you have time to search them out and take a look. Two of my favourites are St Botolph’s Without and All Hallows by the Tower. All Hallows is said to be the oldest church in the City, if you take into account when a church was first built on that site. I had a wander around the City recently and took in these two churches for the first time.

I always like wandering through the City of London.  Maybe it's the mix of the old and the new or maybe it's because it reminds me of old times when I used to live there.  Whatever the reason, the City never ceases to fascinate me.

The City of London is also known as The Square Mile.  As well as being the heart of London’s financial business, it also a very ancient, if not the most ancient, part of London.  It was an old Roman town and was once a walled City.  There are places, for example, near to Tower Hill underground station, where you can still see the remains of the City Wall.  The whole of the City is full of history; all you have to do is keep your eyes open to see things.

A short while ago, I took a good look at St Botolph's Without at Bishopsgate.  Crazy that it was the first time I’d done this since I used to live around the corner, but I suppose familiarity breeds contempt.

As you might guess from the name, Bishopsgate was one of the ancient gates to the old walled City.  There were seven of them: Moorgate, Aldgate, Cripplegate, Aldersgate, Newgate, Ludgate and Bishopsgate.  Bishopsgate leads out towards Shoreditch and Cambridge, along the old Roman road of Ermine Street.

All Hallows by the Tower 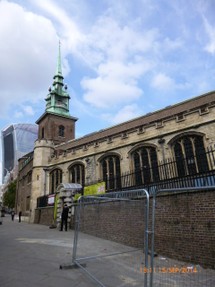 St Botolph’s has “Without” in the name because, in the Middle Ages, it was just outside of the City walls.  Although the current church has been rebuilt, there’s been a church on this site since Roman times, and, as far as I can tell, it’s kept the same name throughout (which isn’t always the case).  The church survived the Great Fire of London, but had fallen into disrepair by the eighteenth century and was re-built.  The current church is the fourth to be built on this site.

Other notable facts about St Botolph’s are: 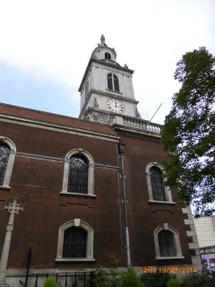 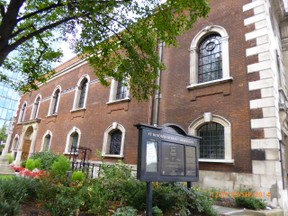 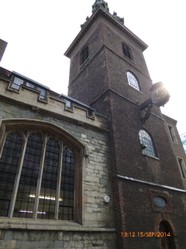 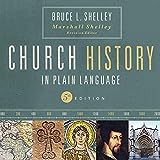