The Irish Diaspora spread far and wide heralding St Patrick's Day celebrations all over the globe. Occasionally the good cheer has gone even further!

While there's not yet been an Irish astronaut upon it, there have been those of Irish descent. Cady Coleman and Chris Hadfield in particular have drawn long and hard upon their Celtic heritage, marking St Patrick's Day amongst the stars.

Wearing the green, dancing to tin whistle ditties and singing 'Danny Boy', just like everyone else, but turning it all into a truly cosmic celebration.

When most of us consider our St Patrick's Day plans, we tend to be musing upon which Irish themed pub has the best prospects for a good night out. Even those preparing to really mark the occasion only get as far as parades and parties.

The closest we'd get to being in orbit is after one too many pints of Guinness with Jameson chasers. Even then, it's all as illusory as a scampering leprechaun taking off to the bog. There's usually at least parts of our anatomy touching the floor.

Not so for those lucky enough to have been picked to serve on the International Space Station. For them St Patrick's Day really takes off, into a thoroughly out of this world experience!

She borrowed instruments from Irish band The Chieftains especially to be able to record this Space Age homage to Ireland.

Born in South Carolina, now living in Massachusetts, Expedition 27 Flight Engineer Catherine 'Cady' Coleman is American through and through. But a deep emerald seam of Irish blood runs through her veins.

The NASA astronaut borrowed a penny-whistle from The Chieftains' Paddy Moloney, and an old Irish flute from his band-mate Matt Molloy. She used them to play traditional Irish tunes for St Patrick's Day 2011, while in orbit on the ISS.

The Chieftains in Orbit

Cady Coleman's St Patrick's Day message was later sampled by the band, when they included the track The Chieftains in Orbit on their album Voice of Ages.

The album marked the band's 50th anniversary playing together, and proceeds from it went to a Haiti children's choir.

The Chieftains obviously developed a bit of a taste for galactic musical collaborations. On February 15th, 2013, when the band played in Houston, Texas, they had a surprise for their audience.

First they introduced Cady Coleman live on the stage, along with the rest of the NASA Astronaut Band. Then they blasted off a live link with another spaceman of Irish descent - Chris Hadfield.

The Chieftains Perform in Houston with NASA Astronauts

This rendition of 'Moondance' featured Cady Coleman on flute, along with other members of the NASA Astronaut Band, including Chris Hadfield, live from the ISS!

Inspired by Cady Coleman and the Chieftains? Learn to play the tin whistle in time for your St Patrick's Day shindig!

His family tree hails back to Donegal, so the astronaut was very keen to honor that blood-line once he took to the stars. 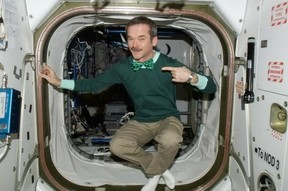 On March 17th 2013, the commander of the International Space Station reveled in being the first person to take Gaelic into the cosmos.

He Tweeted several phrases in the Irish language, beginning with 'Maidin mhaith from the International Space Station! Happy Saint Patrick's Day to the Irish all around the globe. Good morning!' Then displaying further proficiency in Irish Gaelic, as hundreds of followers responded in kind. 'Maidin mhaith' translates as 'good morning'.

His Tweets also included a photograph of himself wearing the green on board the ISS.

As the 2013 St Patrick's Day celebrations gathered pace - on Earth and above - the astronaut had plenty more surprises in store.  Just to prove that he was thinking of the ancestral homeland as much as any other Irishman, he snapped pictures of Tralee, Dublin and Cork, as the space station orbited over them.

Then rounded up his St Patrick's Day party in space with a recording of that most traditional song of the Irish Diaspora - Danny Boy.

Chris Hadfield's Gaelic messages were certainly appreciated on St Patrick's Day, but they weren't the first.

On February 18th 2013, Commander Chris Hadfield made history by being the first person to speak Irish in space.  Or more to the point, to Tweet in it.

Accompanying his photograph of Dublin at night, as seen from the International Space Station, the astronaut wrote, 'Tá Éire fíorálainn! Land of green hills and dark beer. With capital Dublin glowing in the Irish night'.

The phrase translates as 'Ireland is beautiful', and just like that Gailege could genuinely be called a universal language.

Teach yourself Irish - a Gaelic language spoken wherever Ireland sent her sons and daughters, up to and including outer space.

The International Legacy of the Irish Potato Famine
Between 1845-1851, the British attempted a genocide of the Irish by starvation. It's a mistake to think that it's over now. The on-going effects are still felt globally.

Ravens and the Morrigan: Irish Goddess of War
A conspiracy of ravens is interwoven with the Morrigan mythology like a Celtic knot. But why are these birds so linked with Ireland's darkest deity?

Would Ireland have Rebelled if Guy Fawkes had Blown Up Parliament?
What might have been the response of the Irish, if Guido Faukes had successfully exploded the House of Lords in 1605?
Updated: 02/07/2014, JoHarrington
Thank you! Would you like to post a comment now?
5

And you've got to admit that it was cool. :D

Yes, it's quite a traditional Irish song. :)

There was lag! The orchestra on the ground allowed for it, but it was still noticeable. It was more for the cool factor than the quality of sound. :D

I didn't know Danny boy was about Ireland! Huh?
What do you mean Chris played live from the ISS? There is a lag, so how did they hear each other??

He must have planned the bow-tie, but the rest just happened. The ISS flies over Ireland three times a day, so they'd have plenty of opportunities!

Whether it's a parade or a party, or just nipping down the pub, you'll want t... 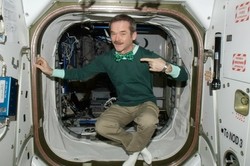 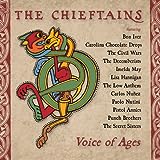 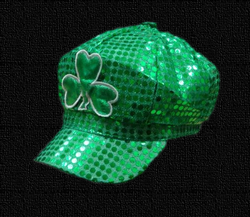 Whether it's a parade or a party, or just nipping down the pub, you'll want to look the part this St Patrick's Day. Check out this Emerald Isle headwear!
Loading ...
Error!