The Old Operating Theatre Museum stands on the site of the old St Thomas' Hospital, near to the Shard in south London. It is a fabulous little museum and well worth a visit.

The Old Operating Theatre Museum is one of those “finds” that if you haven’t been to, I urge you to try to visit. It’s one of a number of London museums dedicated to the history of medicine and it provides a fascinating insight into surgery in the nineteenth century. You actually get to visit an original Victorian operating theatre and see some of the “tools” that would have been used by Victorian surgeons, as well as other interesting facts and information about Victorian surgery.

The Old Operating Theatre Museum is one of those “finds” that if you haven’t been to, I urge you to try to visit.  It provides a fascinating insight into surgery in the nineteenth century.

There has been a St Thomas’ Hospital (or Tommy’s as it’s known to Londoners) since before 1215.  The exact date of founding is unclear, but it was named after St Thomas Becket who was canonised in 1173, so probably after that.  It was originally run by Augustinian nuns and monks.  The original location was in Southwark, just south of where London Bridge now stands.  (It’s actually only a short walk from the Shard.)

In 1540, Henry VIII dissolved the hospital, along with the monasteries, purportedly because it was alleged to be a “bawdy” house (brothel) or, perhaps, because prostitutes were treated there.  Surely it had nothing to do with the fact that the staff were nuns and monks?

The hospital was re-opened in the reign of Edward VI, in 1552, and, with the associated church, was re-built at the end of the 17th century.  The church, around which the hospital was built, had a large garret in the roof space which was used by the apothecary to cure and store his herbs.  In 1822, part of the garret was converted into a purpose built operating theatre.  The women’s ward adjoined the garret, and previously, operations had taken place on the ward!  In 1815, the Apothecaries Act was passed and meant that all apprentice apothecaries had to attend hospitals to observe operations, so hundreds attended the hospital every day, which was far from ideal.  By moving the operating theatre to the garret, it meant that it was separate from the ward, and had a separate entrance for the students.  It also had a large skylight in the ceiling.

Until 1846, there was no such thing as anaesthetic, so surgeons learned to be very quick - a good surgeon could perform an amputation in under a minute!  The patients were also plied with alcohol or opiates to help dull their senses.  If that wasn’t bad enough, the patients had to suffer the indignity of having their surgery observed by a room full of people, because the surgeons were the best in the country.  (Rich people would have had their surgery carried out at home, on the kitchen table!!)  Hygiene was not at the top of the list of priorities either, they didn’t wear scrubs like the surgeons wear nowadays, they wore frock coats that were the norm for the day, but they were not cleaned between operations!  Surgery in those days was pretty much a last resort, so the mortality rate was high.

In November 1855, in the Crimea, the Nightingale Fund for training nurses was established.  Florence Nightingale ended up with £45,000, which was used to establish the Nightingale Training School at St Thomas’ in July 1860.  (The school is now part of King’s College, London and is now called the Florence Nightingale School of Nursing and Midwifery.)  In 1862, the hospital moved from Southwark to its current location on the south side of the Thames, where it overlooks the Houses of Parliament.

The Old Operating Theatre is one of a number of museums dedicated to medicine in London, and allows visitors to walk into a genuine Victorian operating theatre.  There are numerous tools of the trade, busts of some of the surgeons who’d operated there, and so on. 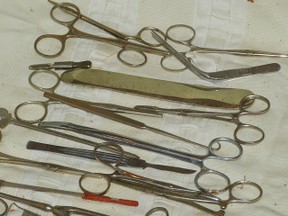 Thank you Maritravel. You're right about the other museums, I learned about so many I hadn't come across before, I now have a very long list! I love the Wellcome too, and will go back as soon as I can.

I love this Museum and so glad you've written about it. I've been meaning to do it for ages but laziness stopped me researching images to go with it. There are lots of off-beat Museums in London that are worth searching out but too many people thronging the streets nowadays means that walking between sites takes so much longer. The Wellcome Museum is also a good place to visit and would make a nice link to this one. 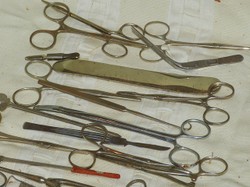