Soar your Star Wars craft to new heights with a Remote Controlled Millennium Falcon or X-Wing Starfighter. These can provide more fun than flying a drone.

The Force Awakens has some exciting new Star Wars items.

Star Wars continues to be popular now that the third trilogy of the three is officially launched with the Force Awakens. This is being written prior to the release of the movie, but after the release of the new Star Wars collectibles and toys associated with the Force Awakens movie. One new item that is certain to be a favorite with Star Wars enthusiasts is the Star Wars Remote Controlled Ultimate Millennium Falcon and another is the Star Wars Remote Controlled X-Wing Starfighter. Now you can take your Star Wars enthusiasm to new heights quite literally.

So Star wars Drones Will Awaken the Force

Drone are popular as fun items even as authorities struggle with regulations for them.  But, short range drones should be viable recreational flying machines.  While these products differ from other drones, there are similarities.  One similarity is the fun, in fact these can exceed the drone as a fun generator.  Now, are you ready for the Star Wars toys that mimic drones?

The Millennium Falcon is a product of Air Hogs.  It is designed to be flown at a distance of up to two hundred feet.  This is well under the drone height of four hundred feet that is acceptable in most locations.

The Millennium Falcon comes with a 2.4 GHz communication that allows you to have control of the vehicle.  It has LED lights and authentic sounds, which probably mask, at least in part, the sounds of the motor.  But, the sounds come out of the controller.

Having the propeller blades recessed into the body reduces the danger of injury through propeller blade strikes, but do be careful not to allow hair to be pulled into a propeller.

Air time is rated at fifteen minutes on a battery charge, and recharging is estimated to take one hour.  The requirement is for six AA batteries.

The Millennium Falcon is rated for both indoor and outdoor use.

The X-Wing Starfighter has four propellers that are recessed into the body in what would look like four pods for propulsion.  These are oriented in the direction of the nose.  This implies the lift is more like that experiences by an airplane where air passing oven and under the wings cause higher pressure from below and lower pressure above the wings.  This is not the drone technology, but does utilize the multiple propeller concept.

A couple of things I do not like about the X-Wing Starfighter are that it must have its laser cannons removed to fly properly, it seems to have a more difficult learning curve, and its lack of movement straight up or down means it must always move forward and apparently cannot hover making it an outdoor only craft.  I cannot see it going slowly enough forward to navigate it indoors.

This product is also by Air Hogs.

The RCs shown take six, so I thought a larger one would be better. I use a four battery charger for my camera.

These sure like like fun, but what really looks intriguing is that battery charger. I have one that will charge four at a time, but it sure would be nice to be able to do more at once.

Ultimate FX Lightsaber - For the Young Yedi In Us All

Go on, look Tommy in the eye and tell him you don't want to play with this St... 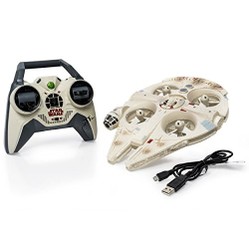 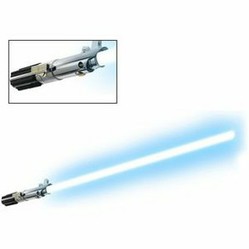 Ultimate FX Lightsaber - For the Young Yedi In Us All

Go on, look Tommy in the eye and tell him you don't want to play with this Star Wars FX Lightsaber! You can't can you!?
7%  0   1 lostinasia
Star Wars 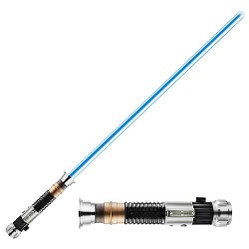