Large crowds continue at venues of our tour with the band playing hard with a fast schedule and chasing thunder storms. The band performed "four nights a week" during May and June.

The Band is Tight and Popular

Concentrate on the Schedule

5-24-10 May starts the busy season as I finished a three-gig-week. Wednesdays Knoxville Harley Davidson gig was good, this was our first time on Clinton Highway and had about one hundred motorcycles. They have a great stage and the band played very well on a cool night.  We played past time as bikes left and management likes that, we will be back. Thursday’s Quaker Steak & Lube turned out to be the biggest this season, and Hanover Fist was the center of attraction with the help of WIMZ and Billy The Kid who stayed all night and partied to our songs. The band played hard and put on a big show. Even when we lost power in the middle of a song. Bam right on time with the music. No Power. I jumped off stage to check the plug and after a search found a bad power cable and replaced that and back on stage. There was about six hundred motorcycles and fifteen hundred people, so no time to waste. By the time Saturday came I was tired going to the Elks Lodge expecting a dull night. We were surprised to find a friendly and fun crowd of about seventy five. The band played great and put on a show. Just what the audience wanted all the songs and all the moves. Mingling with the patrons of Elks. They loved us, but I was in pain by the end of the night. Every muscle hurt, joints ache, head ringing. Oh, it does that all the time. I made those three gigs now rest before next week starts with another Thursday, Saturday and Sunday.

A day off in reverse order from last week. Only a drummer would pick up on a rhythm pattern like that. Yes, Quaker Steak and Lube for the Memorial Day Bike Night then Rookies late night on Saturday, and Sunday is Ride Royal Blue in Oneida, TN. I think it is an ATV rally that night or something, but the schedule continues until the end of July then slows down a bit.

The band is playing very well, Gary is learning and forgetting but progressing and the band sounds better. I am playing as good as I can and Roger is always pushing, and Les is always consistent, and with William booking all theses gigs, the band has to sound good to be this popular. I have to concentrate on the road schedule and the music in the show. Playing different venues in the same week. One night hard rock, then the next night soften the sound with more top forty songs. All preparation is speculation and changes are made at the performance. The band does a great job of cover up. All our performance are loved by the people that hear us. They remember our name. We get paid. Let me mention that.. The weekly salary from music is noticeable in my budget and that becomes addictive. I keep on playing drums. I got to buy sticks ! On request I gave my sticks away Saturday night at the Elks and the band autographed them. Two pair I gotta go to the music store.

5-31-10  Finished another week of music starting with a big night at Quaker Steak & Lube with about eight hundred people. Weather was a factor with threat of thunder storms, it didn’t rain, but looked like it. The band played great with more electrical problems loosing power during a song. Gary had problems with his amp and took one of my amps, leaving me with a tin sound, but the show went on and we finished the night. Friday night at Rookies was great for a late night club. Last minute changes in booking had us playing Friday instead of Saturday. That's ok Friday was open, but we had two offers for Saturday. We had a great sound in the room and had fun, got off an hour early by surprise, management was happy, we got paid.

With Saturday off, I was preparing for Sunday in Pioneer TN. Ride Royal Blue ATV park. This was a nice camp ground for off road four wheeling vehicles. Big campers and expensive all terrain vehicles. The band played on a large patio on the edge of a field and the campers would drive the ATV’s and park in front of the patio. They don’t use lawn chairs. A great night for weather and playing. We played without Roger as he was vacationing at the beach. William hired another guitar player to fill in.  He did a great job. Seventeen yeas old and knew enough classic rock songs to make four sets. It was dark and outside and dirty but every one liked us. We’re going back to Ride Royal Blue in July.

6-8-10 The new mystery gig last week was in Caryville, TN. Now it has new owners and name. Pappy’s. They loved Hanover Fist. All twenty people Friday and fifty on Saturday they drank all the beer in the bar. The band brought water, I always carry a cooler of water in the summer. They loved the band and said we were the best band that ever played there. That’s the beer talking.

Hanover Fist is getting tighter on songs and the show looks better with Gary playing bass. The band looks better and we are getting more bookings, every place we play books us back before we leave. The band is improving and could move up to better venues and more money. Next week is Knoxville Harley Davidson at Lovel Road on Wednesday, Quaker Steak on Thursday, and Bobarosa on Saturday. I am watching the weather for this week as thunder storms pop up in the afternoons and any gig could be canceled. The next week is the same playing Thursday thru Sunday and all out doors. Where’s my sunscreen? Happy Summer.

Another week and three more gigs down, but wet. Rain all day Wednesday at Knoxville Harley Davidson. Just before the gig on Thursday and Saturday’s storm just passed by. When there is rain there are no people. That makes a long gig as was Knoxville Harley Davidson on Wednesday. Nothing but rain and we played two sets and they called it off at eight. No one was there. Quaker Steak had a better turn out after a thunder storm hit that afternoon. There was five hundred people and a party mood on a hot night. We played till eleven. Saturday was disappointing at The Bobarosa Saloon in Del Rio. A good day but not that many people. As we played outside and people are scattered on three acres. But the band played great. Got response from the audience at Bobarosa.    As we are mid season on this tour, wear and tear are beginning to show in the band. Tired from travel and the hours put into playing gigs three nights a week. Next week it will be four days in a row for Hanover Fist. My body hurts after one gig at Quaker Steak then playing three more in a row. I’m in good physical shape, body is getting old, mind growing tired of the same ole. I keep playing for “the money and fame”. I have been doing this so long it becomes easy to say yes, not thinking of the out come. I can hang in there and finish the season. Should be hot and dry for the next weeks gigs.

6-24-10 It’s 2 AM and I am excited with another gig at Quaker Steak Bike Nigh. It was a rain to start but dry and comfortable the rest of the night. Let me recap on last week. Hanover Fist played five gigs in four days. This was Knoxville Biker Rally week and we played at remote gigs. Thursday was at Knoxville Harley Davidson on Clinton Hwy as there was a ride from Chilhowee park were the rally is. There was about fifty motorcycles, small but growing each time we play.  Friday we played Rookies late night till two, then the next morning at Chilhowee Park for the Knoxville Rally at ten thirty till two, then that night at Quaker Steak from eight till midnight. The crowd was good at the Lube, better than the Chilhowee park gig. But that was a large event spread out in a large park. More venders than participants but this was the first year. Sunday we played the Bobarosa Saloon from two till six that afternoon. A big crowd for a Sunday and it was Father’s Day. We had a good time Completed another mission and the tour continues this week. 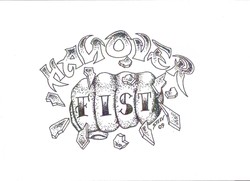 In 1965 the Supremes were a sensation. I was only eleven years old but here's my personal encounter with the three stars.
72%  13   5 jimesposito
Bands