Swamp Deer are type of red deer which specialize in survival on marshy grasslands but the hard ground swamp deer at Kanha differs. Read on...

India is home to diverse wildlife and flora not forgetting the magical avifuana that invites enthusiast from all over the World. Swamp deer is found in the North, East and Central India albeit in reduced numbers and barely surviving. They have lost large grassland ecosystems in which they survived and equally large number have been shot down by the most harmful creature on Earth - Man. 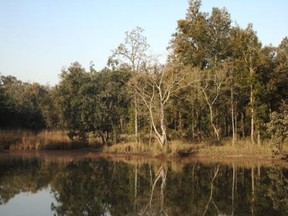 The charismatic deer once survived in large numbers as far as Upper Sind now its range is critically restricted due to decimation of most of its grassland habitats.

The animal in picture here is the Brander Barasingha at Kanha Tiger Reserve. Barasingha is a Hindi name which means twelve tines hence deer with twelve tines or branches of antlers. In English it is called swamp deer or hard ground swamp deer in this case.

Since the marshy grasslands are no more the evolution was necessary in order to survival.

The animal is one of the most charismatic in whole of Kanha with majestic multi tined antlers a graceful body and enigmatic continence. The male weighs around one hundred eighty kilograms and stands at four feet while the female is smaller with no antlers it is equally lithe and graceful.

The robust rufus fur changes as per the season the winter coat being the most attractive to look at and photograph.The underbelly and inside of legs is white in stark contrast to upper body. 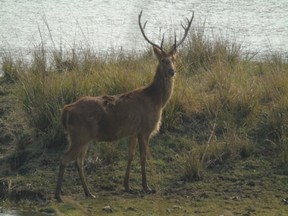 This is the most timid animal I have seen in the grasslands. Yes it is a graminivore and survives on grass and aquatic vegetation. Various species of grass found in Kanha constitute its diet which is also supplemented by seasonal aquatic vegetation found in numerous medium sized water bodies in the reserve.

The deer lives in herd but there is a school formation in case of young males till they create their own space or territory.

At Kanha the breeding peaks during a period of December to February and after eight months a single fawn is given birth. During the breeding season the braying is heard for miles and is most enticing sound to be heard.

Frequent clashes between rival stags could be witnesses during the rut. These are not violent but the tussle usually leads to a decision. The superior male than commands a herd of twenty animals or more and mates with the females in estrus. This is a spectacle worth witnessing.

Albeit predation by the tiger is frequent but the herd is vigilant all the time and the alarm call is unique. The loud braying and constant pounding of hoof on the one after another ground is an amazing sight.

The adults shed their antlers once a year after breeding is over. The new antlers grow after this covered in pink velvet and grow full length by the time of mating.

The saga of conservation of this magnificent deer is a remarkable success story. In the sixties only few heads numbering around sixty where surviving at Kanha National Park. An extensive research was conducted by Dr. George Schaller from USA in association with the management. A conclusion was reached that saved these animals from a certain extinction.

While all the population in Central India was depleted due to take over of wetland and grassland ecosystems by human settlers and many were the victim of hunting only this small herd remained.

At Kanha the major reason for reducing population was predation of fawns by tigers and other animals. This called for preventive measures and a large pen was built and the remaining herd enclosed in it. The pen was cleansed of all predators and was made completely secure.

The deer species bounced back remarkably and today the number more than five hundred heads and breeding. A small herd has been trans-located to Satpura Tiger Reserve and Van Vihar Bhopal both in Central India.

The animal is protected under the Wildlife Protection Act 1972. This act bans all hunting of scheduled animals in India.

Home of The Swamp Deer 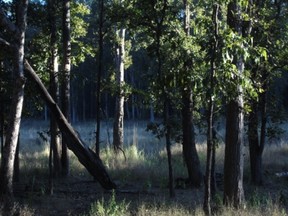 The flourishing population of hard ground barasingha is breeding well at and their numbers are constantly rising. They are found in extensive grassland habitats and near water bodies of core in the tiger reserve. Since robust grasslands do not exist in the buffer or outer area of the park and being extremely shy they limit themselves to the core or the critical tiger habitat.

As a conservation initiative a herd has been translocated to Satpura Tiger Reserve and another to Van Vihar National Park both in Central India or MP.

Best time to visit Kanha National Park is December to February. This is the breeding period and hence fun to watch these dainty animals. Albeit they can be seen year around. y

For excursions in the park a Permit is required which can be booked online at MPOnline website.

pateluday, Thank you for the pictures and the practicalities.
What are the marks that cluster toward the rump on the deer images below the headings red deer in grass and stag swamp deer?

Male deer shed their antlers every year and later grow new ones. You can fin... 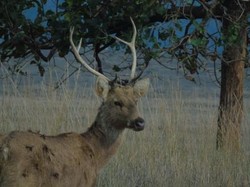 Blogging Your Way to Success6 days ago

Bird Watching in Bharatpur29 days ago 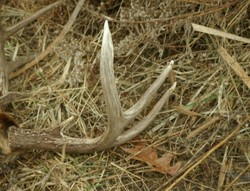 Male deer shed their antlers every year and later grow new ones. You can find antler sheds in winter and early spring if you know where to look.
47%  0   6 DerdriuMarriner
Deers