A look at some of the best children’s books of all time, some of which are enjoyed by many an adult.

What is your favourite children’s book? Is it one that you still read again from time to time, or just a novel that you fondly remember? Maybe it is one that you first read as an adult and wished you has as a child. Here, Steve Rogerson looks at a selection that either influenced him as a child or which he fell in love with as an adult.

The books people read as children can have a profound impact on the rest of their lives, sometimes without them knowing. Some of these books will be remembered, often fondly, for their rest of their lives. Many go back and re-read the books they enjoyed as children later in life and other adults pick up new children’s books for the first time.

This list covers books dating from the 1870s to more recent works such as the Harry Potter books. If you disagree with the selection, then the comments box at the end will welcome other ideas for what should or should not be included.

This is the story of a horse told by the horse. The book is written in the first person and tells the life from childhood (or should that be colthood?) through his working days to retirement. During the story, the horse encounters a mix of kindness and cruelty, and in some ways it serves as an educator on how to treat and not to treat animals. The book was made into a film in 1994.

Emil and the Detectives, by Erich Kästner (1929)

Set in Berlin, it tells the story of Emil Tischbien who is robbed on a train on his way to visit his grandmother. He meets up with other children who agree to help him recover his money. There have been five film versions of the book and a BBC television series.

This was the first of Enid Blyton’s Famous Five series and is here to represent all twenty-one of the books. They tell the story of the adventures of four children and a dog. Julian is the oldest at twelve years old and is joined by his eleven-year-old brother Dick, ten-year-old sister Anne and eleven-year-old cousin and tomboy George. The dog, Timmy, belongs to George. The final book in the series was published in 1962 and was followed a year later by a collection of short stories. There have been English and Danish film versions of two of the books as well as at least three TV series, one of them animated.

Harry Potter and the Philosopher’s Stone, by JK Rowling (1997)

This is first of the series of fantasy novels telling the story of young wizard Harry Potter and his adventures at the Hogwarts School of Witchcraft & Wizardry. The USA version amusingly went under the title Harry Potter and the Sorcerer’s Stone as that was the title of the film in the USA, the producers of which being not convinced that enough of their audience would know what a philosopher was. It won numerous children’s awards and a later book in the series – Harry Potter and the Goblet of Fire – won a Hugo Award.

Young Barney discovers a caveman called Stig living in a quarry near his grandmother’s house. Together, they have adventures and even travel back in time. There have been two television adaptation, by ITV in 1981 and by the BBC in 2002.

The Adventures of Tom Sawyer, by Mark Twain (1876)

This was the first of the author’s four books about the young boy Tom Sawyer and his adventures on the Mississippi River with his friend Huckleberry Finn. There have been numerous film versions starting with a silent film in 1907 and including Russian and Japanese anime versions.

This is the first of six books written by Lucy M Boston about the enchanted house at Green Knowe where lives Mrs Oldknow. The first book tells of young Tolly who stays at the house and discovers it is haunted by children who lived there in the past. The house was based on her home and her daughter Diana Boston will still show people around the house. The BBC did a four-part adaptation in 1986.

The first in The Chronicles of Narnia series, it tells the story of four children who discover a portal to a fantasy universe at the back of a wardrobe. Called Narnia, the world is in a perpetual winter and controlled by the evil White Witch. With the help of Aslan the lion and other creatures, the children conquer the witch and become the kings and queens of Narnia. The book draws on popular mythologies from Norse and Christian religions. There have been at least three television adaptations as well as a 2005 film.

The Weirdstone of Brisingamen, by Alan Garner (1960)

Alderley Edge in Cheshire, England, is the setting for this fantasy novel that tells the story of Susan, who has a bracelet that contains, unknown to her, the Weirdstone, a jewel that holds white magic needed to guard Fundindelve. The stone is stolen by the witches of the morthbrood. With help from Colin, Susan attempts to reclaim the jewel.

Treasure at the Mill, by Malcolm Saville (1957)

This was the book of the film that came out at the beginning of 1957 and was filmed at a mill is Essex and starred the Pettit family who owned the mill at the time. The illustrations in the book were by Harry Pettit. The story is about fourteen-year-old John Adams who has a parchment that shows there is a treasure hidden at an old mill and with help from three other children sets out to find it.

There are many great children’s books that nearly made it into the list including Northern Lights by Philip Pulman, Little Women by Louisa May Alcott, The Tale of Peter Rabbit by Beatrix Potter, Peter Pan by JM Barrie, Charlie and the Chocolate Factory by Roald Dahl, Winnie-the-Pooh by AA Milne and Just William by Richmal Crompton. Feel free to add your own suggestions in the comments box below.

SteveRogerson, Thank you for practical information, pretty pictures and product lines.
In particular, I appreciate both the listing of books I've known and loved as well as those that I need to become acquainted with, such as the Garner, King and Saville publications.

Also, I like the ones that you include below the top 10.

Additionally, to your list, I would include the Oz books by L. Frank Baum. 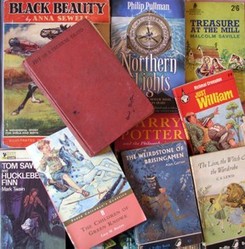 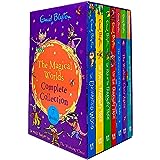 I believe books for kids hold the magic of imagination and knowledge from cover to cover, if we but turn the page.
Loading ...
Error!