I just met someone who swears he sees black panthers around his house. I had to look that up since I’ve read that black panthers don’t exist. What is he seeing?

I did some research into what people might be seeing when they say they’ve seen a black panther. There are many reported sightings of these cats, but the official word is that they don’t exist.
I was amazed by the number of wild cats that do exist in Texas. Some are familiar, like the ubiquitous bobcat, but some I had never heard of before. Some of the other cats can also be dark brown, grey or black. Is this what they are seeing? Or are there really black panthers out there? And just what is a panther, anyway?

Have You Ever Seen a Wildcat?

What is a panther?

Wikipedia defines a panther as the genus Panthera which includes lions, tigers, leopards and jaguars. In Africa and Asia, the term refers to the leopard while in North America, the mountain lion or cougar. The Florida panther is a subspecies of the cougar. In Central and South America the term panther refers to a jaguar. Is a black panther really a panther? Is it really black? What about all these other cats?

Most people are familiar with bobcats (Lynx rufus) with their tufted ears and ruff around the head. They are a medium sized cat that is quite reclusive.

What I didn’t know is that they had such a variation of color. The can actually come in solid black which is called melanistic after the dark skin pigment melanin. There was one captured in Florida in 2007 after killing a pet turkey. The woman described it as the size of a large Labrador retriever but it turned out to be only 20 lbs. They generally weigh about 30 pounds but there was one bobcat who had been killed by a car that weighed 44 lbs. They are only three feet long – the length of a panther’s tail.

Everyone has seen pictures of the mountain lion, (cougar, puma). Males may be as long as six feet and the average weight is 184 lbs.

There have been no cases of a black or melanistic cougar ever being photographed, shot or trapped and they have never bred one in captivity. It’s unlikely that this is what people have been seeing. They do, however, come in a silver grey color. They are nocturnal by nature so someone seeing one at night could possibly mistake it for black.

I had never heard of a jaguarundi before. They are about twice the size of a house cat, but with a very long tail and short legs. They move almost like an otter with their long bodies and tail and sometimes are called “ottercat."

They come in a variety of colors from a dark blackish grey to foxy red. Different colored kittens can be born in the same litter.

They hunt both in the daytime and night preying on small rodents and whatever they can catch. They are extremely rare, but there have been credible sightings in Texas. They are listed as endangered mostly due to loss of habitat.

Below is a short video of a jaguarundi kitten.

The Jaguar is the largest of the new world cats weighing in at 200 pounds and with a length of seven feet. They are found mostly in Mexico, Central and South America, although there was a breeding population in Arizona at one time. They are considered to be extinct elsewhere in the United States but it’s not impossible for a visiting cat to wander across the border.They are a solitary animal, hunting mostly during dawn and twilight. The have the capability of roaring.

Jaguars usually are spotted but they do have a melanistic phase. Some still show the spots but they could be hard to see at a distance or at night. 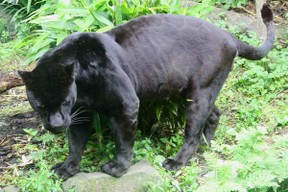 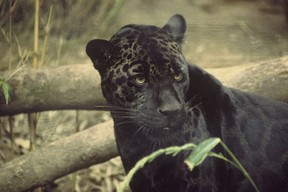 The Ocelot is considered the most beautiful wild cat in Texas with their cream colored coats with orange spots outlined in black. The base color can sometimes be grey. No two cats have the same markings. Many have been killed for their fur.

Adult males may be as much as 3 feet, 10 inches long and females up to 3 feet long and they weigh about 20-35 pounds.

According to most sources, there has been no evidence that there ever were any with melanistic properties although The International Wildlife Encyclopedia, by Maurice and Robert Burton states that there have been rare occurrences.

They are also on the endangered list due to loss of habitat.

The margay is similar to the ocelot, but smaller and more slender. Both cats have been kept as pets, but some individuals of both species have become dangerous as adults. Only one wild margay was confirmed in Texas and that was over 100 years ago. They are reported as not having a black phase.

The margay weighs from about 5 to 8 or 9 pounds, with a body length of 19 to 31 inches, and a tail length of 13 to 20 inches. Unlike most other cats, the female has only two teats.

The margay is solitary and nocturnal and also on the endangered list. They prefer to live in trees while the ocelot prefers to hunt on the ground. The margay can rotate its back feet to facilitate running head first down a tree truck. There has been at least one confirmed account of a margay using vocal mimicry to lure prey.

We still don't know what people are seeing when they say they have seen a black panther. I've watched many videos but it's often impossible to make out the scale of the animal. I imagine many of these videos are of black house cats.

It's true people have seen black bobcats and jaguarundis and maybe even black jaguars. Wouldn't that classify as a black panther? Just because no one has found a black cougar doesn't mean that they don't exist either. Keep watching and maybe you'll see one. Keep your camera handy.

Have you seen any wild cats?

What you are giving us is testimony, a statement of your personal experience. This is the most powerful form of assertion; so it is the most credible and convincing.

Marshall, you could write something for us about your long experience in the woods and all the strange things that you have seen. I am personally open minded about strange experiences,and respect those with the courage to report them. But do not feel under any pressure to do so.

WOW. I bet you were wishing you had your camera!

I have been a hunter and woodsman for over 50 years in the southeast Texas area. I have seen many strange sights over that time in the woods. I have heard about sightings of a large black cats crossing the road However, No one has ever offered any hard core evidence or any picture with clarity of such an animal All my skepticism was challenged yesterday a little after dinner when a large cat (black) crossed the road about 40 yards in front of me. It was about the size of a poorly fed mountain lion. I.m not going to try and name this animal, but I've seen my share Bob cats and other felines in the woods and this was a totally different creature. I fall into the ranks of those who can offer no proof, but that image stay embedded in my mind for a long long Time.

That is so Cool!

Saw an ocelot in johnson city, tx yesterday at a deer lease, middle of the afternoon, he/she walked slowly and was very interested in us as we drove by slowly.

Wow. No, I don't imagine a domestic cat could clear a 6 ft. fence in a single bound. Amazing.

On 3/16/15 my co driver and I were driving past Dallas fort worth airport when a cat ran across the street and leaped over a 6 foot fence, then disappeared into the thick brush around the airport. The cat had a long body and tail seemed just as long. This cat looks like a young panther,maybe a jagaruda ,not sure but it looked to weigh around 40 to 60 pounds! The head looked small but this was not a domestic cat.

My mother saw a black panther this afternoon on our ranch west of Weatherford. I was kind of skeptical ( they have black cows) until she said the next door neighbor had seen it that morning. He is kind of a no bull____ cowboy. Going hunting in two weeks so will see.

Aardvarks are often called anteaters, but they are only distantly related to ... 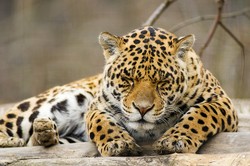 Aardvarks are often called anteaters, but they are only distantly related to the true South American anteaters. Both animals are unique creatures in the animal world.
16%  0   2 Ragtimelil
Other Dog Info

In 1970 Dr Lehr J. Brisbin discovered wild dogs living in the uninhabited forests of South Carolina. He had discovered what is called the American Dingo or the Carolina Dog.
Loading ...
Error!