With the much anticipated movie The Avengers being released in 2012 it's likely that The Avengers costumes will be sought after outfits for Halloween this year.

Are you looking for an Avengers costume? I can't say I blame you, I mean who wouldn't want to dress up as a superhero. The only problem is you can only dress up as one of the heroes from the Avengers.

Luckily I've got costumes for all of them right here on this page for you to choose between, will it be Thor, Hulk, Captain America, Iron Man or someone else?

This Thor costume is based on The Avengers movie where Australian Chris Hemsworth played this superhero who when he's not being Thor is a highly trained doctor.

This really is a costume that will make sure no one messes with you when you're wearing it!

There are a number of different Thor costumes to choose from including some very Nordic warrior influenced ones, but this Thor costume pictured is the one based on the movie.

The most important part of the costume is of course the magical hammer aka Mjolnir as it was when Dr Donald Blake picked up this Norse hammer that he was transformed into Thor the Norse God of Thunder and soon to be Avenger of the international peace keeping agency - S.H.I.E.L.D.

After becoming a scientifically super enhanced soldier Steve Rogers went from super soldier to super hero as the leader of The Avengers.

As you can see from this Captain America costume Steve is very patriotic hence the name Captain America and the use of the stars and stripes on his costume as well as his shield.

This is not only a great Avenger's costume to wear it would also be appropriate to dress up in on the 4th of July don't you think?

Again there are a few different versions of these costumes available, but this one is based on the 2012 Avengers movie.

Robert Downey Jr also reprises a role that he's made famous - Iron Man - for the 2012 movie The Avengers.

Robert Downey Jr is the actor who actually introduced me to Iron Man in the first place and so I'm very happy that he's continuing with the role.

The Iron Man costume pictured here is a replica of Tony Stark's most efficient Iron Man suit yet taken straight from Joss Whedon's The Avengers movie.

Who wouldn't want to be Iron Man?   If you're still not sure which Avenger you want to be that's okay we've still got some more to look at.

I used to love watching the Incredible Hulk on television growing up and it will be interesting to see how actor Mark Ruffalo brings him to life in this movie.

Dr Banner after being irradiated by gamma energy has found that when adrenaline was released in his body he would change into the Incredible Hulk a large green 'monster' with incredible strength.

Nick Fury, the director of S.H.I.E.L.D. hunts down the Hulk and gets him to join his band of super heroes to help keep international peace.

This Incredible Hulk costume is based on the one from The Avengers movie, I'm just hoping Dr Banner gets to use the words I grew up loving to hear, "you won't like me when I'm angry."

Scarlett Johansson is reprising her role of The Black Widow/Natasha Romanoff from Iron Man 2 in the 2012 Avengers Movie.

The black catsuit is an easy costume to wear and all you need to add is some black stilettos.

It's hard to believe that Natasha Romanova was born in 1928 when you look at her, but government treatments have managed to slow down her aging while enhancing her physical abilities - this girl is hot and knows how to take down bad guys, what better character to dress up as!

Now I must admit that until I saw The Avengers movie I hadn't heard of Hawkeye, but I certainly won't be forgetting him now.

I won't go into his role in the movie in case you haven't seen it, but Hawkeye is a master archer and he is really, really good.

This official Avengers licensed costume includes the vest with attached leg straps, gauntlet, glove and pair of boot covers, what is missing is his bow and quiver full of arrows.

Nick Fury was a WWII hero before becoming the director of S.H.I.E.L.D. he ages very slowly and has been trained in many aspects including green beret training.

Nick Fury is brought to life on screen by the amazing Samuel L Jackson and his costume is a relatively easy one to create.

Wear dark trousers and top and cover them with the long leather coat opposite, add an eye patch over your left eye and there you have it - Nick Fury in person.

Which Avenger Character is Your Favorite?

Halloween Costumes for Everyone
Everyone loves to dress up for Halloween from the youngest baby to great grandparents so here's some great fancy dress ideas for everyone in the family.

The image in the introduction is The Avengers movie poster - buy your copy here!

I was thinking of a different Avengers when I first started reading this page. I guess I'm out of touch.
Natasha sounds amazing for her age. Even just wearing the stilettos would be beyond me, and I'm, oh, so much younger!

Angry Birds are such a phenomenon it’s not surprising that you can now dress ... 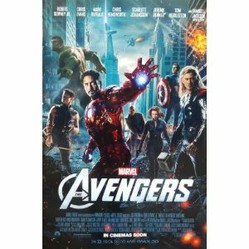 The box office smash hit The Hunger Games is sure to also be a popular costume choice for people this year from dressing as Katniss Everdeen to Effie Trinket.
85%  8   9 lou16
Halloween Costumes for Adults

Angry Birds are such a phenomenon it’s not surprising that you can now dress up in an Angry Bird Costume. I've actually managed to find several Angry Bird costumes to choose from
Loading ...
Error!