The Fate of a nation was decided at Bannockburn. Yet 700 years ago, Scotland's most famous battle for freedom nearly wasn't fought at all.

Bannockburn looms so large in Scottish history, that it seems immutable; a fixed point that always had to happen. A legendary battle forged from pure destiny.

Those that think so were not there. They did not hear voices on both sides arguing to pull each army from the field.

As the 700th anniversary of Bannockburn gathers pace, tales of glory are told, which makes demi-gods and cardboard cut-outs of all who fought in 1314. Yet their personal fears and nerves, rage, frustration and obligations enacted in bad grace were precisely what brought the Scots and English to battle.

It wasn't destiny, but high emotion that made Bannockburn inevitable, and therein lies the real human story.

Robert the Bruce's Nerves on the Eve of Bannockburn

Six thousand Scots stood ready to fight for the chance to forge a self-governing nation again. But their leader wasn't quite one of them.

Robert the Bruce didn't want to fight at Bannockburn. He didn't think that his Scots could win.

The army was only there because his brother had forced their hand, in an unsanctioned deal with the English at Stirling Castle.

With two months' grace, the Bruce had selected and booby-trapped his battlefield. He'd put out a call - largely in vain - for reinforcements for his out-numbered ranks of Scottish freedom fighters.

The majority were Highlanders, whose military tactics more generally relied upon a mountainous terrain.

Flat plains as battle sites were alien to the majority Gaels. Those fields of war were much more suited to the Anglo-Norman style of fighting, facilitating cavalry charges and clusters of pikemen, covered by rows of archers.

Bannockburn remains the most important battle in Scottish history. But it was fought along Anglo-Norman lines. Tactics which nominally favored the English, long experienced in such norms.

As for the Gaelic warriors who answered the call, centuries worth of effective warfare was dismissed as irrelevant. Bruce spent two months drilling them into as much Anglo-Norman military competence and discipline as possible, in order to withstand the rigors of the open pitched battlefield.

But on the eve of battle, he still didn't want the Scots to fight. Fortunately for him, morale was high enough for his dread predictions to be over-ridden.

Tomorrow, at Bannockburn, Scotland would fight for independence, with or without the Bruce; the English could bring what they may.

Books about the Scottish War of Independence

Bannockburn was just one of the battles during this bloody time, albeit the most decisive. Learn more about the context with these history books.

Disarray Amongst the English at the Battle of Bannockburn

Tens of thousands marched into Scotland to take it for King Edward II. But the majority couldn't stand him, and therefore didn't want to be there.

Just over a decade after Bannockburn, Edward II would be deposed by an uprising of his own barons. He died imprisoned in Berkeley Castle, almost certainly murdered in a painfully gruesome way.

His level of unpopularity did not all lie in his future. He'd just narrowly avoided the whole episode taking place a lot sooner.

A homosexual monarch could be tolerated, as long as it was all kept behind closed doors and never impacted upon the running of the nation. Particularly insofar as titles, wealth and power could be bestowed upon its nobility.

Edward II was perceived to have let his sexual predilections govern who would find royal favor. When he'd refused to cower to disapproving posturing and personal threats, his nobles had simply snatched his boyfriend and executed him.

Edward II was now surrounded by generals and knights whom he couldn't exactly trust. Even if they'd personally had nothing to do with the decapitation of Piers Gaveston, then they almost certainly supported the action.

The interim between then and now had been tense in the extreme. Civil war had seemed certain. English nobles and the Marcher Lords had all been straining at the bit to rise in rebellion against their anointed king.

Yet somehow Edward II had clawed it all back. The situation had simmered down far enough for his monarchy to raise the army that marched on Scotland. Robert the Bruce was right to worry about it. Battle-hardened men led well equipped troops, in numbers which far out-stripped those standing on the Scottish lines.

But the expected cohesion wasn't quite there. The cracks of the near miss civil war still showed.

For a start, the amassed English armies could have been so much bigger. Residual fury told in sullen nobles mustering only at the eleventh hour; fulfilling their feudal obligations with the smallest possible number of militia in their train.

More damaging yet was the power vacuum, which had opened up around Edward II. For decades, it had been the families with the prettiest young men which had gained prestige; now they were discovering that might, while not precisely right, could certainly bully their monarch into a grudging compliance. At least until things blew over.

At the highest level, diplomatic wranglings dogged the English army from Berwick to Bannockburn.

Stunned, and still mourning Gaveston, Edward II moved amongst them, cowed for his crown and fearing for his person. Understanding too that he rode in the shadow of his ferocious late father - Edward I, the Hammer of the Scots - and any comparisons would surely be unduly exaggerated and cruel.

Thus it's hardly surprising that, when pressed to choose a commander, Edward floundered into a compromise. It wasn't one person, but two, which jointly controlled the English vanguard across the border into Scotland. Nor were the Earls of Hereford and Gloucester precisely working together, as they rode north towards Stirling Castle.

Such fracture lines were unforeseen by the Scots, but were exploited to the utmost at the battle of Bannockburn.

A classic play, a history book and a novel dramatizing this ill-fated love affair. The repercussions of which were still playing out by Bannockburn.

A Last Opportunity to Avoid the Battle of Bannockburn

If emotions hadn't been running so high, then the English might have refused to fight at all. It's hard to have a battle without an opposition.

There's a sense that the English arrived at Bannockburn so wound up, that battle was inevitable.

From a certain point of view, it didn't need to be. This was exactly the position taken by Sir Philip Mowbray, the English commander at Stirling Castle, who slipped out to meet his countrymen the second they were sighted.

He argued that the terms, agreed with Edward the Bruce two months before, stated that surrender was unnecessary, if an English relief force could deliver supplies to his garrison.

This counted! Tens of thousands of armed men, led by the king of England, would absolutely constitute a relief force!

If they'd just hand over some supplies, then come inside, Robert the Bruce was bound to honor their agreement. Negotiations could ensue without blood-shed.

The Earls of Hereford and Gloucester, along with all their peers behind them, pretty much laughed in his face.

Furious and frustrated, they were spoiling for violence and bloody vengeance. If they couldn't murder King Edward or each other, then they might as well take down some Scots. All notions of continued diplomacy were strangled before they even took hold.

Sir Philip Mowbray had not spent two months twiddling his thumbs. While Robert the Bruce drilled his troops and dug 'pots' into the terrain, the English were watching from the turrets of Stirling Castle.

"Do not enter Bannockburn!" The English garrison commander now warned. He relayed all of his intelligence about how the landscape had been configured to suit the Scots. Mowbray had identified the danger, seen how the English could become ensnared.

His advice was ignored, or not passed along. The battle would commence. Bruce's Scottish army were positioned on Bannockburn field, so that's where the English would go in order to fight them.

It probably goes without saying that this heated dismissal of Mowbray's observations did not end well for the English. It placed them exactly where Robert the Bruce hoped they'd be. Now he could bring into play all those terrain preparations, designed to bog down the English and turn their greater numbers against them.

The Scots must have wondered if it was their birthday. But this was Bannockburn, so in many ways, it was. Now all Bruce had to do was use the gift of bloody-minded English complacency to give Scotland a fighting chance of victory.

Enter into the First Day of Bannockburn

Scottish Independence: The Battle of Bannockburn Pt 3
At Midsummer 1314, the scene was set for one of Britain's most historic clashes. The English fatally under-estimated the Scots, in their struggle for independence.

Discover more about how the armies at Bannockburn would have fought with these books about war in the Middle Ages.

The English were largely all for taking down Edward II instead. But diplomacy dictated that they quickly dispatch this Scottish upstart (Robert the Bruce), so they could hurry off home and get on with the serious business of working out how to do with their own king.

And yes, to my mind, if the English had refused point blank to enter the Bannock Burn, then Robert the Bruce's army would have been in big trouble.

"If emotions hadn't been running so high, then the English might have refused to fight at all. It's hard to have a battle without an opposition."

So when you said the battle almost didn't happen... It's kind of funny that the English being all high strung is the reason that it did, essentially. :|

You realize that historians have been arguing about this since shortly after it happened? The safest stats are probably around 6,000 on the Scottish side, and around 16,000 on the English.

However, the Scots could well have had far fewer, and the English army has been estimated as far up as 100,000.

As somebody not very familiar with this battle, how many English were there, and how many Scottish?

I have the equally nasty suspicion that's the justification for a lot of battles. They say that war is the failure of negotiation.

It's nasty that whole wars can be fought, just because some people are in a bad mood that day.

The Battle of Bannockburn marked a key turning point in Scottish history. Its...

Who Won the Battle of Bannockburn? And What Did they Win?

The popular response would be Robert the Bruce and Scottish independence. As... 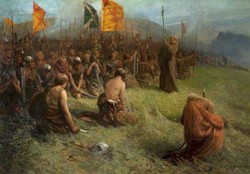 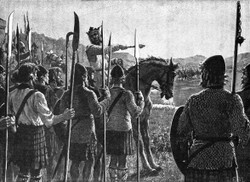 The Battle of Bannockburn marked a key turning point in Scottish history. Its 700th anniversary is in 2014. Robert the Bruce forged freedom for Scotland.
99%  23   8 JoHarrington
Middle Ages 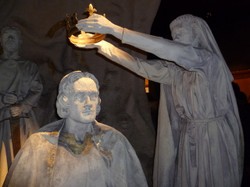 Who Won the Battle of Bannockburn? And What Did they Win?

The popular response would be Robert the Bruce and Scottish independence. As the 700th anniversary approaches, we can take a much wider view than that.
Loading ...
Error!