The American bald eagle is a bird of prey worthy of respect. It has long been a symbol for might and courage, strength, honor and majesty.

Birds of prey kill in order to live, and believe it or not, they help maintain a balance in the world of nature. They have an extreme sensitivity to any changes in their environment, which in turn, serves to alert humans when our own environment is being threatened. People should show them a little more respect. Falconiformes is the scientific name for this entire group, and there are approximately 290 different species. Included in this warm-blooded carnivorous vertebrates of the class Aves are: vultures, falcons, and hawks. The bald eagle, which is the national symbol of the United States of America is also a bird of prey.

Another name for birds of prey is raptors. It is a word of Latin origin and it means “to seize” or “to plunder”. Where do they live? Anywhere they want to! That is ... uh ... Under normal or rather, natural circumstances.

There are so many habitats or places where birds of prey can be observed in all their powerful and splendid glory. They have a distinct advantage over other predators like lions or wolves or sharks. They can fly! So you can find them almost anywhere in the world. Although they are not known for hanging out in Antarctica. The largest concentration of raptors can be found in the steppes of Asia, the North American prairie lands, and the East African savannas, living where there is warm weather and open country. In South America, they make their homes in the extensive rain forests. Some of them have actually moved into urban areas and made nests on the skyscrapers in several cities. Why not? Easy hunting. Pigeons are all over the place. Only a few, such as the gyrfalcon, can brave the Arctic. The majority of them usually migrate to warmer climates during the cold winter months.

In addition to the fact that they are superbly skilled fliers, their whole bodies are designed for hunting and killing. Their feet have sharp talons that are lethal. The better to strike and pierce, my dear. Their toes? Also lethal. Four on each foot; three face forward and one backwards. Useful for gripping and crushing. Especially since they don't have hands. Their hooked beaks are used for ripping the flesh off the bones of carcasses. Finally, they have remarkable eyesight. They can spy a rabbit two miles away, with clear focus. Scientists refer to this ability to focus as “resolving power”. Vultures usually search for dead animals; however, many raptors hunt for live prey. As previously mentioned, they are mainly carnivorous and consume a wide range of foods from different sources in varying sizes: mice, snakes, rabbits, fish, small birds, dead elephants.

The description of them sounds incredibly frightening, but keep in mind: they don't kill for fun, they kill for food. When not hunting for a meal, life is centered around family. When they choose a mate, they are partners for life. They find somewhere to build a nest, raise a family, and their relationship can last for decades – thirty, forty, or even fifty years.

The relationship between mankind and these predatory creatures goes way back; and it hasn't always been “love-ee dove-ee”. Excuse the pun.

In the Old Testament, they were considered “unclean”, therefore, the Hebrews abstained from eating them.

Falconry, the art of using trained birds of prey for hunting or sport, originated in the Middle East and the Far East, and dates back several thousands of years. It was widely popular in Europe during medieval times.

In the 1950s, 60s, and 70s, killing of raptors was allowed and became a common practice. Farmers and fishermen believed that these birds were killing lambs in large numbers and eating up too much of the salmon. Around the world – in America, Australia, Canada, and parts of Europe – literally millions of “innocent” raptors were deprived of life.

Innocent? Yes well, it seems that later on, environmental research indicated that the birds had been falsely accused. Meaning? Meaning that it turns out that they were not the ones responsible for destroying the lambs, etc., etc.,etc. So now we have enacted laws to protect them from us!

In America, the bald eagle took a really hard hit. They were shot as pests and people even paid bounties for dead eagles.

It's difficult to believe the USA did not outlaw the slaughter right from the start. Out of all the birds of prey, the eagle is the most admired.

For many – not just people in America - they have come to symbolize renewed strength and daily courage.

If the research findings had not been disclosed there's a possibility they might have become extinct!

Fortunately, necessary measures were taken to re-establish the population and the majestic bald eagles are once again freely soaring through the skies. Considering what they survived, they are worthy of double admiration and respect.

Hope you enjoyed this!

My Wizzles are on varied topics. Check these out!

Trees Deserve Respect
Who cares if Pluto is or is not a planet? There are no trees there. Trees are the reason nobody wants to relocate to anywhere else in the universe.

What are Beneficial Insects and Why are they a Gardeners Best Friend
Good bugs control aphids, thrips, mealy bugs, scale insects, mites, and whiteflies in our flower and vegetable gardens organically…
Updated: 12/13/2014, cmoneyspinner
Thank you! Would you like to post a comment now?
6

@CruiseReady - Hi! Good morning! Thanks for your comments.

Love those American Bald Eagles! We saw a wildlife show at one of the smaller, lesser known Florida attractions. It was largely devoted to raptors. Their birds had been rehabilitated from injury, and could no longer survive in the wild. The neat thing about the show was that while it was quite entertaining, its focus was really educational. We learned a lot that day, and there were happy to see lots of kids in the audience learning, too.

@WriterArtist - Great board! I'm following now and I'm honored my page is your first pin! :) I have a similar board and it didn't occur to me to pin my own page. Duh! (O.o) Think I'll do that. Thanks! Thanks!! Thanks!!

Came back to pin this beautiful article - http://www.pinterest.com/BloggerArtis...
Created this board for flora and fauna that is endangered.

@WriterArtist - Yeah. Humans really know how to do some damage, don't they?

I am really worried about the planet whether any of these beautiful species will sustain against the constants whims of humans. Our forests and green cover are fast depleting. Amazon rainforests are being exploited for mines and precious wood. I hope the same is not true for the amazing bald eagles of America. Why don't we co-exist with our flora and fauna in peaceful manner?

cmoneyspinner, Nice tribute to this magnificent bird. I've had the awesome privilege to see these amazing raptors, flying free and high, which is quite an unforgettable, inspiring sight. May bald eagles forever cast their mighty shadows across this planet's landscapes.

Eagles have become almost extinct, earlier we always used to see them sitting some where but not anymore, glad that you wrote about them. How are you doing? How's your work going

Great article, I never knew eagles were facing the threat of extinction.

The Bald Eagle is America’s national bird and it symbolizes freedom. These re... 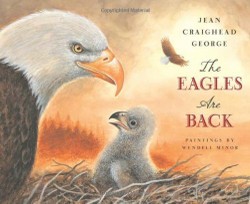 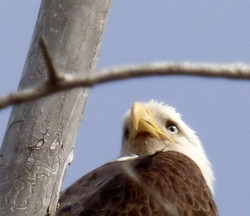 The Bald Eagle is America’s national bird and it symbolizes freedom. These regal, majestic birds have quite a history. The introductory photo was taken by Marsha Camblin.
100%  12   10 cazort
Wild Birds