X Files star Gillian Anderson plays Stella Gibson on the hunt for a serial killer in Belfast in The Fall, a five-part crime drama due to start on BBC 2 on Monday 13 May 2013.

A serial killer - Paul Spector (played by Jamie Dornan) - is hunting young women in Northern Ireland, but he too is being hunted, by Detective Superintendent Stella Gibson (played by Gillian Anderson) who has arrived from London's Metropolitan Police and is heading a task force to solve the murders.

A serial killer and a detective pit their wits against each other in The Fall, a five-part crime drama due to start on BBC Two on Monday 13 May 2013. The detective is Detective Superintendent Stella Gibson (played by Gillian Anderson) and her adversary is Paul Spector (played by Jamie Dornan), a serial killer preying on young women in Belfast.

Gibson is brought to Northern Ireland from London’s Metropolitan Police after local officers are left scratching their heads following a high-profile murder. She works out that a serial killer is on the loose and heads a task force to find him.

Viewers though know from the start his identity and see the drama unfold from his point of view as well. They see him living an apparently normal life with his wife and children and the lengths he goes to in avoiding detection by the law.

Actors in The Fall

Gillian Anderson is best known for playing Dana Scully in The X Files but her first major role was as April Cavanaugh in the 1992 film The Turning. Other roles have included Lady Dedlock in Bleak House, the Duchess of Windsor in Any Human Heart, Mrs Castaway in The Crimson Petal and the White, Elizabeth in Moby Dick, Miss Havisham in Great Expectations and Doctor Bedelia Du Maurier in Hannibal. Bleak House and Any Human Heart earned her Bafta nominations and The X Files landed her a Golden Globe, Saturn Award and an Emmy.

Irish actor Jamie Dornan is currently on TV screens as Sheriff Graham (The Huntsman) in Once Upon a Time, his first recurring television role. Film roles have included Count Axel Fersen in 2006’s Oscar winning Marie Antoinette and Joe in 2009’s Shadows in the Sun.

Team behind The Fall

SteveRogerson, Thank you for practical information, pretty pictures and product lines.
Does Gillian Anderson affect an accent from a certain part of London?

Films and series on this side of the pond generally make bringing in an outsider problematic for those who are used to working together. Would there be this kind of tension on your side of the pond, dramatically and realistically? 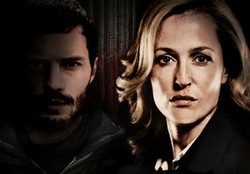