The Lady and the Unicorn tapestries each feature a noble lady in medieval dress, a unicorn. and other animals.

When I saw these wall tapestries with the lady and the unicorn I was just thrilled! I love mythical creatures, and the unicorn is one of my favorites. These tapestries are so glorious in their deep, strong colors. The lady looks very noble, regal even, and the unicorn and the lion are doing pretty well too, even if they do seem to be in her service.

I love to see animals looking happy and not killing each other! So if you know a unicorn lover, a wall tapestry of the lady and the unicorn might well be the perfect gift.

The Lady and the Unicorn tapestries are a series of six wool and silk tapestries. Each tapestry depicts a noble lady in medieval dress, with a unicorn and other animals. The unicorn takes different positions, and a lion also appears in a variety of positions in all the tapestries. Other animals, such as a monkey, rabbits, and birds also appear in the different tapestries. Five of the tapestries depict the five senses - taste, hearing, sight, smell, and touch. The sixth, however, is more difficult to interpret.

This sixth tapestry is controversial in terms of its interpretation due to the obscurity of the words À mon seul désir ("To my only desire") that appear woven into the top of the tent behind the lady. Generally, though, this tapestry is considered to represent love or virginity. This idea of virginity fits with the common legend that unicorns could be tamed only by a virgin.

The Sixth Tapestry: "To My Only Desire"

History of the tapestries

Not much is known about these tapestries, except that they were made for the Le Viste family, since their coat of arms features in each one. Since they also contain millefleurs ("thousand flowers") which were a specialty of weaving workshops in Flanders, it has been assumed that the tapestries were made there.

Based on the little information available about the Le Viste family, the weaving style, and the style of dress depicted, the tapestries have been dated back to the end of the fifteenth century.

Five of the tapestries depict the five senses - taste, hearing, sight, smell, and touch. Reproductions are available as wall tapestries for purchase.

In this tapestry, representing the sense of taste, The lady is taking sweets from a dish held by a maidservant. Note the monkey sitting in front - he seems to have got one to eat too!

Not sure whether the unicorn and lion are competing to see who gets the next one.

This tapestry depicts the sense of hearing, with the lady playing music on a special kind of organ.

This one depicts the sense of smell, with the lady holding sweet smelling flowers that she is weaving into a garland.

I just love this one with the unicorn looking in the mirror and seeing its reflection. Now that is cool!

The lion has a pretty interesting look on his face too!

And here's the lady with her hand on the unicorn's horn, depicting "touch." The unicorn seems tame enough, but I'd watch out with a scary looking horn like that!

The "Lady and Unicorn - Sense of Touch" tapestry is also available with green or blue backgrounds as an alternative to the original red color. The sizes and prices are the same as the red version.

The tapestries were "rediscovered" in poor condition in the mid-nineteenth century and were put in the Cluny Museum (now the Musée National du Moyen Age) in Paris. They still hang there on public display in an oval room. The tapestries have been restored several times, including a cleaning in 1975 which restored the colors to their original brilliance.

Reproductions of the tapestries

In addition to the wall tapestry reproductions, all the tapestries are reproduced as prints, some in the old unrestored colors, and some with the brilliant cleaned version.

Some even feature detail rather than the whole tapestry.

I have to admit, this unicorn detail from the "Sight" scene, with the unicorn admiring his reflection in the mirror, is really rather special!

A fictional account of the creation of the tapestries

These tapestries have always been mysterious, from their interpretation to the reason for their creation. In The Lady and the Unicorn, Tracy Chevalier blends fact and fiction together to produce a fascinating account of the creation of the tapestries, one that might even be true.

More about the Lady and the Unicorn tapestries

Yes, I love the tapestries and the stories too!

Love these unicorn tapestries, I did not know there was so much behind the Lady and the Unicorn pattern. The stories and the meaning behind these tapestries are fascinating. 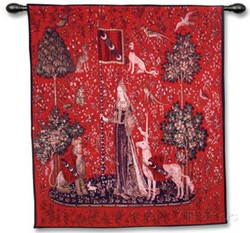 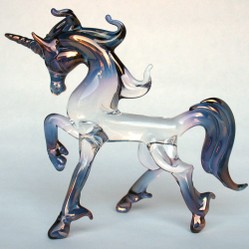 Unicorns are magical and beautiful - the perfect model for a delightful gift for any occasion!
100%  27   16 jptanabe
Greek Mythology