The Last Voyage of the Mirabita

The Mirabita was a wooden, three masted sailing barque, trading in a variety of goods around Europe. She was the property of Maltese seaman Salvatore Mirabita, sailing under the Maltese flag and there was much invested in her for his sons were also an integral part of the crew.

In January 1859 she left Constantinople en route for England. By April 19 the Public Ledger and Public Advertiser reported her arrival at Gravesend, having called at Odessa. In June she ran into a spot of bother when they docked at Hull and were detained for several weeks. In November she visited Cork by way of Marseilles and from there set out for London. It turned out to be her final journey

The south coast of the Isle of Wight is breathtaking, a series of bays and cliffs, some sandy, some chalky, stretching for sixteen miles from Blackgang Chine to the Needles Rocks.  Head south-west into the Atlantic and the next landfall is in South America.

On a balmy summer's day it is a paradise. With its rugged cliffs, restless diamond encrusted waters and powdery sand.It is a magnet for surfers and sandcastle builders.but beware, on a bad day the combination of tide, gales and fog can make it a graveyard for unsuspecting seamen.

The night of December 7 1859 turned out to be one to haunt the local people living at Brooke and Brightsone villages. From their beds, the fishermen in the vicinity of Grange Chine listened to the raging storm and thanked their gods that they were not at sea, yet fearing that their boats might be torn from their anchorage and dragged to destruction. The prayer went up that no one else was adrift in these treacherous waters.

By first light the wind had not abated and from the shore local families heard the chilling sounds of men screaming for help. They watched helplessly as a barque thrown up on the rocks began to break apart.  There was nothing to do but wait for the storm to subside. This was the Mirabita.

Hours later the word came that another ship was in trouble and her crew had lashed themselves to the masts hoping for survival. She was the schooner Sentinel, en route from Caernavon carrying a cargo of slate.

Unable to wait and do nothing, as soon as there was the slightest lessening of the wind, local man Joshua de Costa and five volunteers set out in a desperate rescue attempt but they were quickly forced back.  Later that afternoon with a crew of seven the lifeboat was again launched and they managed to find four men whom they were able to bring ashore.

The last to be saved was local fisherman Frank Wearn who at great risk to himself had waded into the sea, managed to get a rope to a crewman and haul him ashore.  Earlier, three of his brothers had perished in the same spot when they were run down by an excursion ship plying its trade along the coast.  By now, all hope of saving more was past. The rescued were taken to the house of Mr Brooks where they recovered.  .

Over the next four days bodies began to wash up on the shore.  At Grange Chine, seven corpses were discovered and deposited in the barn. The coroner recorded the facts as far as he knew them in his ledger.  The men, identified only by their first names, were Carlo, Michaele, Vincenzo, Luigi, James, Antonio and Andrea, all crew from the Mirabita.  Another name was added, Salvatore Mirabita, the ship's captain aged fifty-four.

At the inquest it established that of the crew of seventeen aboard the Mirabita, twelve had drowned.  For their heroic efforts, Joshua de Costa who had launched the first rescue attempt was awarded a bronze medal and the other crew members were given two pounds each.

One of those aboard the second time was the local vicar of St Mary's church at Brooke, the Reverend John Pellew Gaze. Born at Portsmouth, married and with three children, the plight of shipwrecked sailors began to haunt him, leading him to campaign for lifeboats for each village along the coast.  it took ten years before the first vessel was launched, called appropriately, the Rescue.

The bodies were interred in the churchyard of St Mary's Church at Brighstone but the grieving family wanted their loved ones back and a year later they were transported back to Malta.

As a history writer, one brushes shoulders not only with the living, but also the dead.  In researching this article I followed the journey of the Mirabita for the last months of her existence with an increasing sense of anguish, knowing what was going to befall her.

For the most part it was a life of loading and unloading cargo, waiting impatiently for tides and winds, following familiar sea routes, relaxing and enjoying a brief time in the ports across Europe before the the next voyage began, but at Hull, two of the crew found themselves in trouble,

Brothers Salvatore and Miletea, sons of Captain Mirabita found themselves detained on a charge of smuggling. The ship had just been cleared to leave the port for Sunderland but Mr Davis the customs officer, acting on information received, went aboard and searched her.  At first he found nothing but then a package containing fine silk and lace was discovered hidden under one of the bunks and both brothers were charged.  Miletea pleaded guilty but Salvatore said in his defense that being British citizens, they had every right to bring goods into the country without paying duty. It made no difference. They were each fined £100.

One can imagine the recriminations as the ship was held up for several weeks. Perhaps, had this not happened, the Mirabita might have sailed past the south coast of the Isle of Wight days earlier. Perhaps the weather would have been clear and calm.  Perhaps...who knows?

Amazing and anguishing, indeed. There is such a strange thing about the story of ships and men lost at sea. Those accounts can't help but draw you in, and your account certainly follows suit.

What a sad story, Jan. I can imagine how you felt while you were researching this tale. You;ve managed to unearth some interesting photographs too, all of them helping to illuminate your text. The Aftermath and the Footnote were both essential add-ons I feel, so thank you for those. 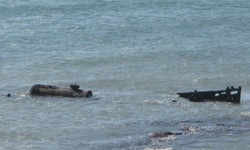