The Isle of Wight - as seen through Windows

Most good paintings need frames and sometimes a limited view of that beach or castle takes on a whole new perspective. Take a stroll around some Island landmarks, new and familiar

For many, the Isle of Wight is a heaven on earth, a balmy diamond off the English coastline, offering sand, sea, cliffs and downs plus a treasure house of history. Few visitors come without seeing Carisbrooke Castle or Osborne House. The Needles Rocks, the natural rainbow of sand at Alum Bay or the dinosaur beaches along the southern coast all have a unique charm. There is something for everyone. Whether you visit for a day or put down roots that last a lifetime, there will always be hidden surprises that can take your breath away. Queen Victoria's arrival transformed a remote island into a fashionable seaside resort, fit for princes and emperors. Painters capture it, poets eulogise about it, the only thing to do is to see for yourself.

Fourteenth century Newtown was a thriving Medieval settlement. That all changed when in 1377, the French launched a major attack destroying the village. Slow to recover, three centuries later it was still described as a poor, decaying place as the estuary on which it depended for marine trade, silted up.  By the 18th century, it had only about ten houses but, it still sent two MPs to Parliament,  The Great Reform Act finally lived up to its name and Newtown, along with the rest of the Island, ended up with one MP.  The Town Hall was left to decay until it was rescued in the 19th century. and is now in the hands of the National Trust.

Inside the 19th century church at Newtown

On the north-easterly coast of the Island, Ryde was a remote fishing village, reached from the mainland with difficulty because of the vast sand swathes left daily by the tides. Intrepid travellers often had to be carried ashore on the backs of local fishermen. That changed in 1814 when a pier was built, the first and for many years, the longest in the country. As more people were attracted to the resort, a railway and tramway were added to the pier, holiday makers streaming ashore at the weekends.

Elegant society found it a perfect place to build holiday villas and fishing was superseded by boarding houses and seaside entertainment.  Next only to the capital Newport, in terms of importance, it still attracts thousands of holiday makers and its elegant buildings are a reminder of its hey-day.

Appuldurcombe House is a beautiful, elegant ruin, the victim of a second world war bomb. Nestling in the village of Wroxall, it was once the site of a monastery, later an Elizabethan manor house, receiving a major refurbishment in the 18th century.  The estate covered much of the southwestern part of the Island and some seven hundred acres formed the parkland. Monuments to the Leigh and Worsley families who were the landowners until the 18th century, dominate the church at Godshill.

Its last major owner, Baron Yarborough, used it mainly as a pied-a-terre for his sailing activities, being a founder member of the Royal Yacht Squadron. Thereafter it went through several incarnations as hotel, school, priory and military hospital before the fatal day that the bomb left it uninhabitable.

The grounds and the shell remain a very atmospheric place in which to wander.

During Victoria's reign, the Island population grew so fast that graveyards were overflowing. To meet the need at Cowes, the first municipal cemetery was opened. The inaugural burial caused additional distress to Mrs Cribb when it was realised that her husband had been buried facing the wrong direction. As exhumation was illegal, under cover of darkness the grave site was extended so that the coffin could be manoeuvred around without raising it above ground level.

This beautiful window is a part of the mortuary chapel, recently renovated by the Friends of Northwood Cemetery.

Nonconformist churches and chapels proliferated across the Island during the 19th century. This Bible Christian church made a late appearance in 1904 at Totland, dedicated to two early missionaries, MaryToms and William Bailey. It served the community for more than a century before being converted into houses. Although generally of plain decoration, the windows added an artistic touch.

In 1865, work began on building a priory at Carisbrooke. It was the project of the Countess of Clare, a Catholic convert who had already provided a church at Ryde, entitled The Catholic Church of the Sorrowful and Immaculate Mary.  Despite its considerable size, St Dominic's Priory housed a very small community of nuns. It continued until 1989 when the last nun departed. With a failed marriage, the Countess had shared her life with her companion, Miss Charlotte Elliot who died in 1861. The Countess had to wait for 18 before joining her in Mountjoy Cemetery

Newport owed its success to its location at the head of the navigable River Medina. On both banks of the river, warehouses grew up, over the centuries bringing in and exporting coal, wood, stone, wool, cereal and many commodities desired for a comfortable life. Today, much of the old quay and its railway have gone but what remains, keeps that haunting sense of a once bustling port with foreign sailors and noise, the public houses always busy. The Quay Arts Centre makes excellent use of the buildings that were happily saved.

The Isle of Wight - as seen through Windows

Middleton is not a place on everyone's lips. It was once a part of the Farringford estate, the area jettisoned into the limelight by poet laureate Alfred Lord Tennyson. The steam mill was built in the 1870s, the project bankrupting the builders  An unhappy fire saw the Miller's assistant killed and the washing from the Tennyson household spoiled by smoke as it was in the hands of the laundress at the mill cottage. Later a bakery and a coal merchant's, it is now a private house with carpenter's workshop.

A unique way to look at a place...charming!

What a quirky idea - as seen through windows. I like that.

I don't know the Isle of Wight ; it's quite a way from Manchester so this is very especially interesting. Thank you for posting.

BSG this area may be of interest to you with your ancestry.

Photographing through windows is an interesting technique. The Isle of Wight is one of the three English counties that I have not visited. I intend to visit it one day. 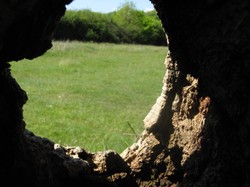 This is the most enchanting model village I have ever visited. It is like stepping back in time and has many sets that will make all of us sigh with nostalgia.
70%  10   6 katiem2
The 80's