Amos Grind, a resident of Nether Fondle, sets off on his electric scooter to take a trip down memory lane. Some of his recollections are surprising.

Nether Fondle is a village somewhere in England with a long and turbulent past. Saxons pillaged, Romans conquered, Frenchmen harried, Englishmen merged triumphant.

Amos Grind was once the village scavenger. With his horse Ezra he roamed the streets treasure hunting, whether for gold and silver, broken furniture or rags. His progress around the time soon became a familiar sight, as did his frequent visits to Nether Fondle cottages, where the man of the house always happened to be out.

When old Amos Grind’s legs grew a bit dodgy he took to walking with a stick. After a year he had to rely on two sticks and some time later the hospital gave him a Zimmer frame.
Amos didn’t complain much. He could still toddle as far as the Bust and Boobies for a pint and a bit of a chat. Then one day, halfway between the almshouse where he lived and the pub he nearly collapsed. His legs began to tremble and he only just saved himself by sinking onto a low brick wall.
This was when he really started to panic. The thought of being housebound was a step too far. For a few weeks he couldn’t leave home without the aid of a helpful arm and a taxi. That meant bothering someone else and forking out for the price of the ride and this couldn’t go on. Then, just as he was sinking into a pretty bottomless well of gloom, the Nether Fondle Twilight Rescue sprang into action and presented him with an electric scooter.
The scooter stood in the yard behind his cottage, a cable leading through the kitchen window to a plug where the battery could be charged. It gave him a range of twenty miles before it would need to be charged again. Suddenly, instead of shrinking, his world had expanded so that he could take in Upper and Lower Fondle and even Ladies Touchstone if he felt so inclined.

Another satisfying tale of the rum goings-on in Nether Fondle. What a lovely cast of characters you have here. I presume you will eventually collect them into a book(let) and publish. They deserve a wider readership than you'll get here unless we can interest all the bloggers to log in. Now how would you do that? 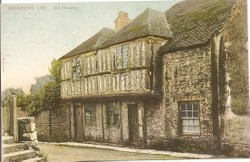