Kerrie Hayes stars as Esther Price in The Mill, a four-part period drama due to start on Channel Four on Sunday 28 July 2013.

Life in England's cotton mills during the Industrial Revolution was hard, especially for the children who had to work twelve-hour shifts without pay. This effective slavery and the rebellion against it forms the story of The Mill, a four-part historical drama due to start on Channel Four on Sunday 28 July 2013.

Industrial England in the nineteenth century is the setting for The Mill, a new four-part period drama due to start on Channel Four on Sunday 28 July 2013. This was a time when the poor, including children as young as nine-years-old, had to work twelve-hour shifts in appalling conditions while the mill owners became a new wealthy class.

Fact and fiction mix in the four hour-long episodes. A third of the workers at the cotton mill are unpaid apprentices sold to the mill owners by local workhouses. Effectively slaves, they are not allowed to leave the mill until they are adults. The Greg family that owns the mill also has slaves in the Caribbean.

But change is afoot, led by Esther Price (played by Kerrie Hayes), who puts herself at risk by standing up for justice. She is encouraged by new arrivals engineer Daniel Bate (played by Matthew McNulty) and John Doherty (played by Aidan McArdle).

Actors in The Mill

Kerrie Hayes’ television acting career began in 2007 when she played Ruby Moss in eight episodes of Lillies. Her next recurring role was the following year as Poppy Taylor in Doctors. More recently, she was Amanda Morgan in Good Cop. Her film credits include Marie’s friend in Nowhere Boy and Nicole in Kicks, both in 2009.

“She’s got a real sense of humanity about her,” said Hayes about her character. “She isn’t somebody who’ll just get into a fight for no reason. She picks her battles, and she shows her weaknesses as well. I’ve always wanted to play someone who actually existed. I loved getting to do that. But it freaks me out a little bit. It’s not like she was someone really famous – the fact is that she only existed on a few bits of paper. And I’m trying to make her a bit more emotional, because no-one actually knew what she was like. She was judged by her actions. But a picture would have been nice, that would have been really helpful.”

Matthew McNulty was nominated for a Golden Nymph at the 2008 Monte-Carlo TV Festival for his role as Shane Gulliver in The Mark of Cain. His career dates back to 2001 and he had a number of one-offs in the likes of Emmerdale, Shameless, Doctors and Holby City. Recurring roles have included Taylor Carter in Honest, Danny Preston in Five Days, Fisher Bloom in Lark Rise to Candleford, Stuart Bradley in The Syndicate, Seth in Misfits and Dudley in The Paradise.

Aidan McArdle also played a number of one-offs in his early career but his first recurring role was in 2005 as Dave in All About George. More recently, he was Andy Doonan in Beautiful People and Silvester in Garrow’s Law.

Kevin McNally plays the hated Mr Timperley, who is in charge of the teenagers at the mill, and Claire Rushbrook plays his wife. Overseeing them is Charles Crout (played by Craig Parkinson), whose mistreatment of young apprentice Miriam Catterall (played by Sacha Parkinson) acts as a catalyst for the events that unfold. Holly Lucas plays Miriam’s sister Susannah. Apprentices Lucy and Catherine Garner are played by Katherine Rose Morley and Katilyn Hogg. Freed slave Mary Prince is played by Flo Wilson.

Team behind The Mill

Written by John Fay, The Mill was based on the historical archive of a real mill – Quarry Bank Mill in Cheshire, which is now owned by the National Trust. It was directed by James Hawes and produced by Caroline Levy. The commissioning editors were Julia Harrington and Sophie Gardiner. The executive producers at production company DSP were Julian Ware and Dominic Barlow. DSP’s creative director was Emily Roe. David Sekers, who used to be museum director at Quarry Bank Mill, was the historical consultant. 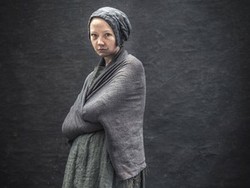