I have to admit that I am falling more in love with Nerf’s N-Strike line. Especially when you look at a gun like their Raider with epic shooting speeds and a crazy ammo loads

Sure, a lot of Nerf’s new lines such as the Firefly and Vortex lines are cool. I mean, who wouldn’t love battery-activated shooting and glowing darts?

However, with a lot of these guns, their strengths are also their weakness. Once the batteries are gone, they are quite useless. And while that isn’t apt to happen mid-game, you can easily find yourself to be victim of the no-batteries-in-the-house blues.

So you really should consider having a Nerf Raider as backup -- if not as your main gun.

The Nerf Raider is really the anchor of the N-Strike line, whether Nerf meant it to be or not.  It’s long enough to develop enough power and range with each shot to be able to peg most enemies and outshoot pretty much everything except, perhaps, the Longshot or Longstrike. (The Nerf Nitron can get some range as well, but doesn’t tend to be as accurate)

The Nerf Raider is really a simple design. The front handle doubles as a pump for the cocking mechanism and allows for super quick cocking action. Thanks to its ergonomically-friendly design, you can shoot this gun nearly as fast as some of the semiautomatic weapons Nerf has designed -- and without that annoying hum.

If you need to lay down a hail of darts, you can simply hold down the trigger while cocking rapidly to shoot as fast as you can pump it. It’s pretty terrifying for the enemy.

Most people recommend the Raider for about 20-25 foot gameplay zones.

What is really the major benefit of the Nerf Raider is its 35 round drum magazine.  The drum magazine is compatible with all N-Strike clip designs and can be used with other N-Strike products such as the Nerf Longstrike or Longshot.

So you could can use the standard 6-shot clip in this gun, and lend it to a friend while you use the magazine drum with its 35 rounds in your Longshot or Longstrike.  (Yeah, don’t come play Nerf with me. I am that mean.)

As any avid Nerf player will tell you, running out of ammo is one of the worst problems in a Nerf battle.  However with this clip you may have a new problem -- finding enough Nerf warriors to battle you.

Don't Mess With The Nerf Raider!

A Happy Nerf Raider Owner Shows Off His Gun

The Nerf Raider has 2 Tactical rails which are compatible with all of Nerf’s tactical components.  So you can throw on a scopes, lights, red-dots -- and even mix and match equipment that you might have gotten with your other Nerf guns.

Additionally, it has an adjustable stock which makes it a great choice for a wide range of ages.  Frankly, I wish Nerf used adjustable stocks on more guns as too often you get a hopeful kid who discovers that their arms just aren’t long enough to really handle their new toy.

The 35-round drum is such as essential part of the Nerf Raider set up that you might want to check out the Nerf Raider value pack that not only includes your Raider gun, but also the Additional drum clip and extra rounds to make sure that you enter the field at the top of your game.

Using the slam action shooting system you can easily rain down a hail of darts on any opponents, especially when you consider both the stealth and the additional range this gun has over your automatic shooting competition. 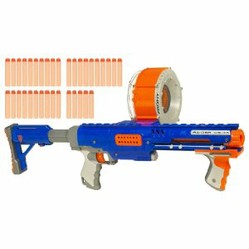