David Tennant and Emily Watson star in The Politician's Husband, a three-part drama due to start on BBC Two on Thursday 25 April 2013.

Some 18 years after Paula Milne penned the award winning The Politician's Wife, she is back with a companion piece The Politician's Husband, starring David Tennant of Doctor Who fame and Emily Watson as a married couple, both MPs whose fortunes suddenly change. This preview by Steve Rogerson looks at the careers of the two main actors and the original The Politician's Wife.

All seems to be going well for senior cabinet minister Aiden Hoynes (played by David Tennant) and his wife, junior minister Freya Gardner (played by Emily Watson), until Aidan decides to resign from the cabinet in protest at one of the prime minister’s policies, but suddenly discovers that he does not backing he thought and finds himself a backbencher. Freya, meanwhile, is promoted to the cabinet. This sudden change in fortunes puts strain on what they thought was a happy marriage.

This is the basis for The Politician’s Husband, a three-part drama due to start on BBC Two on Thursday 25 April 2013. It was written by Paula Milne, who was responsible for the award-winning The Politician’s Wife in 1995.

“It is said that all power corrupts but the power balance within a marriage can be unspoken and subtle whereas the power games in politics are more overt and manipulatory,” said Milne. “The drama explores the personal realm of a political marriage played against the ruthless hubris of Westminster politics, and what can happen when those two realms collide.”

Actors in The Politician’s Husband

David Tennant is best known for his Bafta winning performance as the tenth Doctor in Doctor Who, which also led to an appearance in The Sarah Jane Adventures. Other notable roles have included Simon ‘Darwin’ Brown in Duck Patrol, Greig Miller in Terri McIntyre, DI Peter Carlisle in Blackpool, Casanova in the 2005 Casanova mini-series, Dave in Single Father, Jean-Francois Mercier in Spies of Warsaw and DI Alec Hardy in Broadchurch. He also played Bartemius ‘Barty’ Crouch Junior in Harry Potter & the Goblet of Fire.

Team behind The Politician’s Husband

The Politician’s Wife was first broadcast on Channel Four in 1995 and starred Trevor Eve and Juliet Stephenson. The show won a Bafta for best serial drama and an Emmy for best international drama, both in 1995. The programme also received three Bafta nominations – Juliet Stevenson as best actress, Alan Jones for best editing and Tom McDougal for best photography and lighting. Paula Milne won a Writer’s Guild of Great Britain Award for writing it and Juliet Stevenson a best actress award from the Broadcasting Press Guild.

SteveRogerson, Thank you for product lines, pretty pictures and practical information.
How does David Tennant's character end up as a backbencher? Does a cabinet member who resigns automatically become a member of Parliament or must elections be held?

The film Darkest Hour kind of gives that impression with Neville Chamberlain resigning as prime minister but then occupying a seat albeit front-row, not back-row, in Parliament with Winston Churchill's prime ministership. 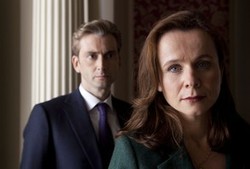