The Rescuing Hug: A Story about Twins and Human Connection

This "rescuing hug" was all over the news in 1996, when Life magazine and Reader’s Digest ran the photo and the story. It resurfaced this year.

I was organizing my boards on Pinterest and found this image of what came to be called the “rescuing hug.” I looked at the photo once again, and this time clicked on it to read more that the bit in the Pinterest comment. I ended up searching on Google as well. (NB: The story and photo were first published in Worcester Telegram & Gazette on 18 Nov. 1995.)

Here’s what I learned. Twins Brielle and Kyrie Jackson were born on October 17, 1995 at The Medical Center of Central Massachusetts, in Worcester, MA. They were premature, and not even two months early, but three. They weighed only two pounds. They were immediately put in incubators. Separately, so as to reduce the risk of infection. Kyrie seemed to be doing fine, but Brielle had breathing and heart problems, and she showed other signs of distress as well.

On the night November 12, Brielle’s condition worsened dramatically. Despite the oxygen flowing into her lungs, she had such trouble breathing that her limbs turned blue-gray. She was desperately crying and gasping for breath as her heart rate was reaching dangerously high levels. She also got hiccups. The medical staff present was afraid they might lose the baby.

One nurse attendant there, Gayle Kasparian, started trying things: she hugged the baby; she gave her to Dad, who held her lovingly; she wrapped the baby in a blanket. It didn’t change Brielle’s condition. Then she thought of something that she had heard was done in Europe, co-bedding, and placed Brielle in her sister Kyrie’s incubator. The girls' father, Paul Jackson, says that as soon as the incubator door was closed, “Brielle snuggled up to Kyrie and she was just fine. She calmed right down. It was immediate. It was absolutely immediate” (Worcester Telegram & Gazette, 18 Nov. 1995). Brielle’s heart and breathing relaxed, and her blood-oxygen levels got higher, closer to where they should have been.

Then Brielle dozed off. And that’s when her sister Kyrie reached out to hug her. Brielle’s heart rate then stabilized, and when the twins went home right before Christmas, they were both healthy.

Kyrie and Brielle are twenty-five now, as close as ever, and healthy.

The event at the Medical Center of Central Massachusetts, captured by a photographer who happened to be on the scene, helped change neonatal care in the US. Nowadays it’s common practice for twins, triplets, and quads to be placed in the same bed, especially if they are born prematurely.

Healing Emotions: Conversations with the Dalai Lama on Mindfulness, Emotions, and Health. By Daniel Goleman, author of Emotional Intelligence, Social Intelligence, and The Meditative Mind

I found that story amazing, Derdriu. Just look at that little arm reaching across the other girl's shoulders :)

Mira, Thank you! Such a lovely true story told so wonderfully by you! It's nice that it has a happy beginning -- before the hug, with the fact that they survived early birth, and after the hug -- and a happy ending.

Thank you, Sheila! Good to see you on Wizzley! :)

This is such a beautiful story! What's amazing is how long it took for them to see the obvious -- love and human connection is vital.

Glad you read it and enjoyed it, Brandon!:)

Wow! I saw the picture on the Wizzley Home page and thought of reading it, pretty much the same way you checked out the pinterest board. I'm glad I read it.

This story reminds us that there is more to life than many people think. 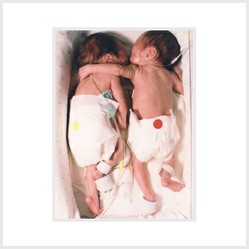 Some of these rings come with semiprecious or precious stones, like black and white diamonds, sapphire, marcasite, topaz, aquamarine, and citrine. They make great Christmas gifts.
100%  32   18 Mira
Weight Loss

Twenty tips on how to cheat hunger and lose weight for people who spend too much time behind a computer; brief explanations as to why these tricks work, and some meal suggestions.
98%  9   13 TheWritingCowboy
Newborn Health

Breast-feeding in public is sometimes controversial, as a recent incident in Beverly Hills demonstrated.
Loading ...
Error!