The Seven Year Itch is a comedy starring Marilyn Monroe and Tom Ewell that walks us through the famous seventh year of marriage hiatus with lots of humor and glamour.

So the theatre play became a movie in which the ever beautiful Marilyn Monroe plays the role of the Girl. It was a 20th Century Fox movie, as stunning as the company was able to produce movies. One of those films you’ll never forget and will enjoy for years – and that is still enjoyed half a century after it was released.

The Seven Year Itch - The Plot

What's this comedy all about

Because he sent his wife to the beach during the holidays, Richard Sherman is left alone in his apartment after his day job duties. Until he meets his second floor neighbor: the Girl. The meeting results into a tomato pot falling from the second floor patio that broke Mr Sherman’s chair. Therefore the Girl wants to apology and pays her neighbor a visit.

Both spend the night together talking and drinking while taking fresh air from Mr Sherman’s air conditioning machine.

Mr Sherman and the Girl will meet several times during this very hot summer in New York and the man, who’s attracted by the Girl, feels guilty. While reading a book, he’s getting more and more paranoid. This paranoia leads into hilarious situations.

The Seven Year Itch movie is also the movie from which Marilyn Monroe’s best known picture was taken: the one on the underground grill.

This Movie Makes a Fantastic Gift for a Fan

The Seven Year Itch movie is available in DVD , Blu-Ray and even in VHS format if you haven't jumped in the digital wagon. It is also part of Amazon’s Prime program that enables you to watch videos on demand, download them to your computer, and much more.

Here is featured the Amazon Video on Demand availability. You can rent it for $3.99 and buy it for $12.99 (high definition - lower quality is cheaper).

Above all, have fun and enjoy watching this excellent comedy.

As said earlier, for a Marilyn Monroe’s lover, the Seven Year Itch movie makes a fantastic gift. Add to that the star’s death anniversary is about to come (5 of August), it is also going to make a wonderful item to add to their collection.

Marilyn's scene on the subway grill has become an icon

Her name will never be disclosed in this movie

Marilyn Monroe, aka Norma Jean Baker, was born in Los Angeles on June 1, 1926. She began her career as model but signed her first contract with the 20th Century Fox very quickly after having been noticed by Howard Hughes. Marilyn Monroe became a Hollywood star and a sex-symbol in the early fifties and played roles in successful movies such as The Seven Year Itch, Niagara, Gentlemen Prefer Blondes, Some Like It Hot, and The Misfits.

Being a star has downsides and Monroe vainly researched happiness throughout her life. She got married three times; the first one when she was only sixteen with James Dougherty, the second time with Joe Di Maggio and the last time with Arthur Miller. She committed suicide on August 5th, 1962 and entered the legend, becoming an icon of the cinema.

A Scene from The Movie - Champagne and Chips

Richard Sherman and The Girl

Tom Ewell, aka Samuel Yewell Tompkins, was born on April 29, 1909 in Kentucky. Tom Ewell was mainly a theatre actor and his career started by playing in Summer Stock Theatre (productions presented during the Summertime) in the early 1920s. He enrolled in the ActorStudio a few years later and played generally comic roles in Broadway productions.

Ewell played the role of Richard Sherman for many years in the Broadway production "The Seven Year Itch" before being hired to feature the character in the movie, adapted for the cinema. He won a Tony Award for his role in the movie.

Ewell played essentially for the theatre but got a few successful movies as well. He got his own TV show during the sixties, "The Tom Ewell Show" and played a recurring role in the TV-series "Beretta".

I remember this movie. Tom Ewell was really funny.
I didn't know Marilyn Monroe was discovered by Howard Hughes. Interesting. 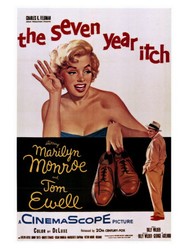