TV series The Thin Blue Line is a sitcom created by Ben Elton (The Black Adder), which makes a wonderful gift idea for someone who is fond of British humor and series.

The Thin Blue Line is a TV series that I used to watch in these good old days, when I was young and beautiful. This British sitcom was on air in the 1990s and the hilarious episodes are of those I never get bored with. The Thin Blue Line was written by Ben Elton and performed by Rowan Atkinson, the well known Mr Bean, Black Adder and Johnny English.

If you’re looking for a gift to make someone who’s fond of sitcoms and British humor – or the Black Adder – then you have found something that will provide your recipient with lots of pleasure.

Fowler is the head of the uniformed police of Gasforth. He’s a rigid,  strict, and quite old-fahioned man and applies the management of his team “by the book”. Married in the past but since then divorced and father of a boy, his soul mate in life is Seargant Dawkins. Unaware of current social trends and definitely fond of old-fashioned way of life, he amuses the Constable Habib and paves the way for open criticism from Detective Grim.

She is Fowler’s significant other and desperately wants to have a baby – Fowler pretends that having a child is the best reason for him to not want having another. The character is frustrated by Fowler’s lack of interest in having any kind of sexual-life. She is jealous of the relationship her partner has with other women, whether she would be Constable Habib or her “Chrissieship”, the mayoress.

Maggie Habib is a feminist muslim who has an open mind and defends minorities. She is Fowler’s best officer and the most promising one. She is fine, intelligent, wise and often solves problems with caution although she is not exempted from getting wrong (like she was when Constable Goody was asked to make his “coming out”).

Constable Goody is the youngest member of Fowler’s officers and became a policeman because he wanted to wear a “nice uniform”. His lack of intelligence is his most prominent characteristic. Goody is also deeply in love with Constable Habib and would do anything to win her heart. However he has no talent and each of his attempts to seduce this intelligent policewoman is a failure.

This “Bobby” has been a police officer all his life, just like his father was one in their home country. He is the quietest man of the crew and enjoys telling anecdotes from his failed marriage. Although he doesn’t do anything noticeable in the series, this character balances the extravagance of all others pretty well and the series wouldn’t be the same without him.

Watch The Thin Blue Line Over and Over

Get the complete series

Here we meet the CID’s head. This is a conceited character, considering himself as superior to his uniformed colleagues. He considers that uniformed police is a thing of the past. Alas, he is incredibly stupid and his language mistakes are the occasion for dozens of hilarious word plays. If by chance, he would put a criminal on arrest, Fowler and his squad will quickly defeat him. Most of his investigations and arrests are bitter failures. According to its own statements, his life is miserable as he is married for 20 years to the same woman (and things cannot get worse than they already are). His son is also a well known Gasforth’s teenager delinquent.

Grim’s second, this character appears in the first 7 episodes in season one. Intelligent, he joined the police forces for the perks that came with the status. Although a prominent character, one could rarely hear him having an actual speech. He is known for using cynical short expressions and spends most of his time on the phone, ordering take away food.

In the first season, the CID squad includes more officers than in the following series. However none of them has a prominant role.

Constable Boyle replaces Kray in the second season. Boyle has more or less the same characteristics as Kray. However, instead of his predecessor, he respects the uniformed police. Another difference between the two characters is that the new one actually works while on duty.

The two seasons include each 7 x 25 min. episodes. The DVD comes with the 14 episodes plus an interview and a documentary about the series’ author Ben Elton.

In summary I would say that the Thin Blue Line series is a real gem among sitcoms and that it will please anyone wanting to spend a good time laughing out of loud. The only downside of this series lies in the fact that, although there are 14 episodes, when one finishes watching the last one, one expects an additonal season… or more.

Have you Ever Watched this TV Series? 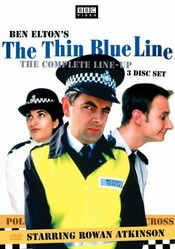