The Shangri-Las has grown to be one of the first white girls R&B band, toured with the most popular artists on the sixties and inspired many singers through the years.

The Shangri-Las, aka the Shangs, were so popular and toured so much during their short career. In their so short career, they were considered as bad girls and phenomenal singers.

How many people did dance to the sound of their songs as teens and even grownups? The Shangs had a thing to make teenagers cry while listening to their heartbreaking tunes. What about you? Whether R&B fan or addict, do you consider The Shangri-Las discography as one of the most wonderful ever?

If you're like me: deeply touched by The Shangri-Las' poignant tunes, then I invite you to read on. We're going to step back in the past and revive those fantastic moments and watch some videos starring the Shangs.

When the band was formed

The Shangri-Las was a vocal group formed in High School in New York and included two pairs of sisters: Mary (15) and Betty (17) Weiss as well as Margie and Mary Ann Ganser (16). The girls grew up in the same district in Queens, a few blocks from each other and took their name from a deli located in their district.

The Shangri-Las were performing locally when they were noticed by a producer. He quickly signed them for two records: "Simon Says" and "Wishing Well"; which had very little repercussion in the beginning of the year 1964.

The story of the Shangri-Las could stop here and the girls could go back to their own lives and studies. However, George "Shadow" Morton noticed the potential of this vocal group. He convinced the girls to record the song "Remember (Walking in the Sand)", a song George "Shadow" Morton wrote in his car. Remember was presented to Red Bird Records who liked the song. It was realeased it and the company signed the Shangri-Las for a 5 year contract.

"Remember (Walking in the Sand)" was a big hit and reached #5 in the US charts!

Other records have been released after this first heartbreaking tune. The worldwide success "Leader of the Pack"; which included absolutely unusual motorbike sounds, was next. The Shangri-Las performed other hits such as "Right Now And Not Later", "Out In The Streets", "I Can Never Go Home Anymore", "He Cried", and many more.

Remember (Walking in the Sand)

The Shangs are responsible for my music addiction

Although I listened to R&B music very often when I was a child, I didn't really make a choice about the type of music I was fond of. But as a teenager, I was making my first choices in life. My boyfriend was a biker and the totem song of the biking club was... "The Leader of the Pack". I loved the heartbreaking song; it touched me deeply since I was a biker's girlfriend (and probably  because young girls love "bad guys").

In addition whenever one of the bikers would pass away, the Shangri-Las' Leader of the Pack was played at the funerals. As a matter of fact, tunes that spoke about bikes, black suits, boots and rebels were highly appreciated in our club. Therefore, we all liked tunes such as Dressed in Black and Out In the Street as well.

My own parents disliked my boyfriend and his bike with a passion, just like in the Leader of the Pack. They tried for years to have me break up with him. Long story short, I eventually became the biker's wife and he didn't die in a bike crash.

But the Shangs songs had a huge influence on my personal musical tastes and I quickly became addicted to blues, rhythm and blues, motown and soul with a preference for 1960s sounds. Thirty years later, I'm still listening to such a style of music every day.

This canvas photo makes a fantastic gift for a fan

The Shangri-Las' Leader of the Pack Facts

One of the greatest songs ever

The Shangri-Las' Leader of the Pack is listed as the 447th greatest song ever. A French version titled "Le chef de la bande" was performed by French singer and later on photographer Frank Alamo.

Leader of the Pack couldn't air on BBC radio in 1964 because the UK thought the song praised violence; however the song reached the UK charts three times: in 1964, in 1972 and in the year 1976!

Add More Fun To Parties With a Karaoke Session

How well do you know this song?

Remember the Shangs' Side B Tunes

Listen to the Shangri-Las best hits over and over again

Mary Weiss, the Shangri-Las lead singer, had a stunning voice, very similar to the sound of the best soul and Motown singers. Ganser twins attended piano classes at their parochial school and also had a wonderful soul voice as noticed in "I Can Never Go Home Anymore" in which one of the Ganser sisters sings the opening.

This compilation is a real Shangri-Las discography and includes 36 of their best tunes. All are remastered and this compilation is an invitation to listen to your favorite 1960s records over and over again. Here are some of the tunes included:

Disc #1 (12 tunes): Remember; What Is Love?; Maybe; Give Us Your Blessings;, the unforgetteable Leader of the Pack; and more.

Disc #2 (13 tunes): Right Now and Not Later; I Can Never Go Home Anymore; Dressed in Black; Past, Present and Future and others.

The Shangs had a bad girls image

The Shangri-Las music style was clearly inspired by the Detroit Motown sound, and, just like James Brown, I was surprised to learn that this vocal group included only... white ladies. Moreover, The Shangri-Las were extremely popular among Motown fans and was even listed as top new group in the R&B category.

Sadly, the Shangri-Las never had a strong recording company such as the Tamla Motown to support and promote them; which is probably the reason why the Shangri-Las' career came to an early end. Their discography includes many texts relating heartbreaking stories on haunting or depressing music. In any way, the Shangri-Las were a cutting edge vocal group; their style was unique in artistic production although highly popular among teenagers of the time.

Because their songs often related to bikers, black jackets and gangs, the vocal group quickly gained a "bad girls" image. Indeed, The Shangri-Las started performing dressed in girls of the 1960s typical clothes: blouses, skirts and heels. However, in order to illustrate and better match the "Leader of the Pack" subject, they wore skin-tight vest and pants along with leather boots.

The Shangri-Las' clothing style is nowadays known as "cat suit" (black skin-tight pants and vest on white or black blouse along with white leather boots).

The Perfect Fan's Present for Any Occasion

A photo of the complete band - It was very rare to see Betty Weiss in public exhibitions.

What have they become

The Shangri-Las included 4 members; however, Betty Weiss rarely appeared in the group public performances. In the last years of the Shangri-Las, though, Betty started airing with the band while Mary Ann Ganser took a break from touring with the group. When Mary Ann came back, Margie Ganser, her twin sister, took a one year break from the vocal group's tours. It seems that the girls were quite tired as the Shangri-Las toured extensively during their short career!

"Past, Present And Future" was the last tune the Shangri-Las recorded for Red Bird Records and they signed with Mercury Records. Alas, success failed and, by the end of 1968, the Shangri-Las became part of the story and the girls went back to a normal life.

In 1970, Mary Ann Ganser had to deal with health problems and passed away. Betty and Mary Weiss each got married and soon divorced and got married once again and are still married nowadays. Betty is the only lady of the Shangri-Las who has a child, a daughter named Tracey.

Margie Ganser and the Weiss sisters performed together from time to time till the end of the 1980s. During this period, the Shangri-Las had to deal with a false Shangri-Las band that didn't just perform under their name but also pretended to be the original vocal group of the 60s.

The year 1994, Margie Ganser, who worked for a phone company, was diagnosed with breast cancer and, after a two-year fight against this horrible disease, passed away in 1996. Betty and Mary Weiss went back to normal life.

The Shangri-Las toured with the best artists of the time such as the Beatles, Chuck Berry or Dusty Springfield and influenced some of the most popular artists such as Debbie Harris of Blondie, Aerosmith or Amy Winehouse. They have also promoted Revlon cosmetics and recorded dating etiquette annoucements.

From the album Golden Legends: "Give Us Your Blessings", released in 1966 was the B-side of "Heaven Only Knows" and hit the top 10 and 20 regionally in the US. However, it reached #29 in the US national charts. The Red Kross covered the tune in their album "Teen Babes from Monsanto".

Song "Right Now and Not Later" released in 1965, was #99 in US charts. Performed at Shivaree the band included Betty Weiss (who was rarely present for public exhibitions).

"I Can Never Go Home Anymore" was released in 1965, the track reached #6 in the US charts.

The Shangri-Las Gold Record Awards: the band was awarded two gold records. The first one for "Remember", the second gold record for "Leader of the Pack".

"Sophisticated Boom Boom" is another track for which Mary Ann Ganser took the lead. The tune was "Long Live Our Love" B-side.


"He Cried" performed by The Shangs was, in reality, a reworking of Jay & The American's "She Cried".

The "New Shangri-Las": There is a group, including one blonde and two (sometimes three) brunettes who performs under the name of Shangri-Las. Although this group pretends to be the original vocal group; it is, in no way endorsed by the surviving real members of the original band.

The Myrmidons of Melodrama Fan's Corner

Glad you discovered this band - they were fantastic and their songs will be remembered for years.

I so enjoyed this. I had never heard of the Shangri-Las before. I found their story, costumes, and music intriguing. 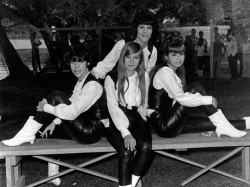 In 1965 the Supremes were a sensation. I was only eleven years old but here's my personal encounter with the three stars.
69%  9   4 zteve
Bands

This is my tribute to Jimi Hendrix who I regard as one of the finest ever guitar players and a pioneer of modern popular music.
Loading ...
Error!