Want to learn fun facts about tigers? Come check out all sorts of interesting tiger facts, pictures, video and more!

Tigers are famous all over the world, beloved for their beautiful fur, and for being such mysterious hunters, and rare creatures. They're the biggest cat in the world, and can be found in books, movies, legends, and artwork from many different cultures. The tiger was even voted as world's favorite animal on Animal Planet!

Want to learn more fun facts about tigers? Read below to learn all about tigers for kids, and adults too. Check out all sorts of interesting facts about this beautiful big cat that has fascinated people all over the world.

Interesting facts about tigers for kids

Tigers are one of the "big cats," along with the lion, jaguar, and leopard. Being a "big cat" means it can roar, and the tiger's roar can even be heard a few miles away.

Tigers are the biggest species of cat in the world today, growing up to 11 feet long (3.3 meters) and weighing almost 700 pounds (300 kg). Plus, they have the biggest fangs.

A tiger's fur is its most distinctive feature, with black stripes on bright orange fur, which helps it keep hidden while it's hunting other animals. These stripes are unique to each animal, so scientists can tell which is which just by looking at the stripes, kind of how fingerprints are different for each person.

Also, the stripes aren't just colorful fur. If a tiger loses its hair for some reason, its skin has the stripes too!

Where do Tigers Live? 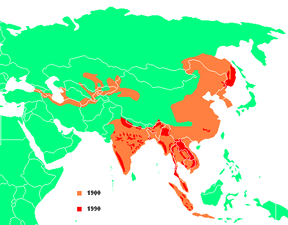 Today, tigers live mostly in Asia, in countries like India, Bangladesh, China, and Thailand, with some species living in eastern Russia, like the Siberian Tiger.

Tigers used to live all over Asia, but their territory has shrunk quite a bit, due to human territorial expansion and hunting. Scientists think there are between 3,000 and 4,000 tigers living in the wild, with another 4,000 living in captivity, and they are considered an endangered species.

Tigers live in different types of forests, where their camouflage is useful, and they can stalk and ambush their prey by hiding in the bushes. They always live near water, and are good swimmers, unlike other cats.

The Life of a Tiger

How do tigers live?

Tigers are born blind, and too weak to take care of themselves, staying inside the den for the first few months. They stay with their mother for about two years, learning how to hunt before they go off on their own, to find their own territory. After that, tigers live alone, but sometimes run into each other when looking for food, or when they want to breed.

Tigers can live up to 25 years, whether in the wild or in captivity, though not all tigers survive the first few years after leaving their mother, when they're first starting out.

Books of Tiger Facts for Kids

Click to buy books about tigers online from Amazon!

What do Tigers Eat? 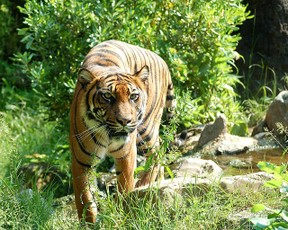 Tigers are carnivores, eating other animals, such as deer, buffalo, wild boar, or smaller animals like rabbits or fish. Although tigers usually hunt smaller animals, they are very strong, and can sometimes eat other predators, like bears or crocodiles.

If a tiger kills a large animal, it can sometimes take days to eat the whole thing, so it hides the body and comes back later when it's hungry again.

Because tigers sometimes live close to humans, some farmers lose some of their animals to the tigers, which is part of the reason sometimes tigers and humans don't get along.

Tiger hunting in the wild

Click to see more and buy online from Amazon!

There are six types of tiger alive today:

There were three more tigers that lived, but are now extinct:

These tigers are named after the region where they are found. Most tigers look similar, with differences and size and other details, but they all look like tigers, with the easily recognizable orange fur and black stripes.

Tigers are known for their orange fur and black stripes, but a few very famous variations are almost as recognizable:

Why Are Tigers Endangered?

Tigers are considered an endangered species, with three species of tiger already extinct, and another one, the South China tiger, very close to extinction as well. Conservation groups work to protect tigers from extinction, but it's a difficult job, and it's going to take a lot of work.

Tiger populations have been declining for a number of reasons, all due to human interaction. Tigers have a lot less room than they used to, due to human territorial expansion, and if their territory is cut off from other tiger territory, they have a harder time finding other tigers to breed with.

Tigers are also a target for poachers, who kill the tigers for their fur and other body parts, which can be sold illegally throughout the world.

If tigers are going to survive, it's going to take some serious effort from conservation groups, who work to stop poachers, and try to protect tiger habitats from human development.

Groups like the World Wildlife Fund and Save the Tiger Fund work to protect endangered species from problems like these.

Beautiful tigers from around the world

Tigers are famous throughout the world for being strong hunters, and many countries use the tiger as a symbol of their strength as well. The tiger is the national symbol of India, Bangladesh, Malaysia, and South Korea, and is found in the Chinese zodiac and constellations.

The tiger was also named the world's most favorite animal, in a survey by Animal Planet, and with so many famous tigers in children's stories, it's easy to see why. Tigers are found in all sorts of stories, from children's cartoons to ancient legends.

Famous tigers include Shere Khan and Tigger, and Hobbes, from Calvin and Hobbes. Even though tigers are ferocious hunters, they're just too beautiful not to be in children's stories too, where they are usually more cuddly than scary.

Tigers will be in stories forever, because they're such beautiful, beloved, fascinating, mysterious creatures. Grrr.

One of nature’s most perfect killing machines dozes in the afternoon heat. We watch the cat sleep as other jeeps crowd around us like a pack of dholes, the wild dogs that hunt inside the park. People gasp and point, then click their cameras from the safety of their vehicles. Slowly, the tiger opens one eye, and with a casual glance in our direction, locks me in a gaze so powerful that all else disappears. After licking its paws and stretching its back, the cat rises to its feet. Then the tiger turns its head and walks deeper into the forest until it disappears.

White tigers are some of the rarest and most popular big cats in the world. R...

Want to learn all sorts of fun facts about Siberian tigers, for kids to enjoy... 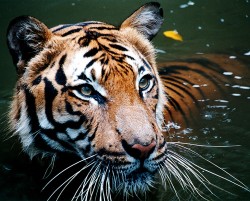 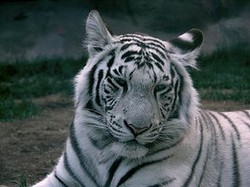 White tigers are some of the rarest and most popular big cats in the world. Read on for interesting facts about white tigers, for kids, and parents too.
67%  6   6 eslevy17
Tigers 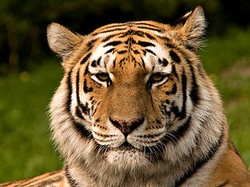 Want to learn all sorts of fun facts about Siberian tigers, for kids to enjoy, and maybe adults too? Read on!
Loading ...
Error!