Over the years there have been numerous secret societies with their hidden agendas, which constantly sparked curiosity and fear mixed with wild conspiracy theories.

Secret societies have existed from the first time people have gathered to live in groups. It is not so easy to write about the top 5 secret societies, because I've personally read books and research material for at least 20 that have come up and become famous (and scary) throughout history, but I think the 5 I will mention below will be among the most notorious ones.

All these societies tend to inspire fear in the regular folks simply because if it's good, it should not be secret, plain and simple. 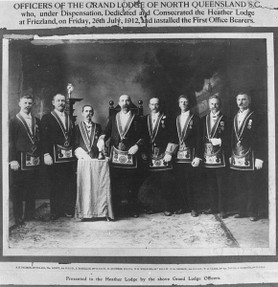 The Freemasons are considered some of the strongest, most dangerous and most secret societies  in history. Their members have been said to be some very powerful ones, including famous international leaders who could easily control world currencies, start wars and infiltrate any other society at will. And entrance to the Freemasons was not easy at all.

Currently the group of freemasons is said to include around 6 million people worldwide. Some of the most famous members are said to have been George Washington, Benjamin Franklin, Andrew Jackson, Harry Truman, Duke Ellington, Winston Churchill and Gerald Ford, among others. All well known names widely recognized all over the world.

The Freemasons were one of the 'good societies' in existence, promoting good deeds, acts of charity for the benefits of the community as a whole. While they are secret, there is lots of information about their values, principles, symbols, morals and ways to enter the exclusive society. In fact the Freemasons themselves prefer to be called an 'esoteric society' with a few secrets.

While the first masonic lodge (called The Grand Lodge) has been formed in 1717 when 4 groups of London lodges have joined together, it is said that masonic lodges have going back as far as the 16th century in Scotland.

Currently there are 3 main degrees of Masonry:

The most common symbols associated with the Freemasons are the square and the compasses, and to enter meetings the members use various handshakes (tokens) and signs, which can be different from group to group. These different signs can easily identify the genuine members of the society.

Becoming a member can happen if you are recommended by another Mason, or when potential candidates inquire about the membership, however there are a few requirements that can make this possible:

Women can not join the regular Freemasons lodges, however from case to case they can join various masonic bodies which is open for women as well.

Do You Consider The Freemasons A Famous Secret Society?

Worth Watching About The Freemasons

Some Of The Best Books On Freemasons Secret Society

I've read countless books on Freemasons, but these I think are some of the best worth reading 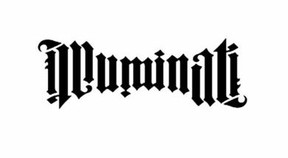 Since Dan Brown's writings, there have been more people who heard the term 'Illuminati' that of any other secret society ever. Countless books have been written about them and even the movie fever has caught up with this secret society.

The Illuminati is one of the most powerful and notorious group in history. It was first created in 1776 by a Bavarian Jesuit scholar callled Adam Weishaupt. Illuminati means "Enlightenment" and the main idea behind it was for people to shed their prejudices, religious and political oppression and become mature and enlightened members of the society. One of the main symbol of the Illuminati is the pyramid.

The society strived from the beginning to be a group of freethinkers ahead of their time. It was  actually one of the societies loved by atheists because the members did not need to believe in a supreme being like the Freemasons.

While officially the Bavarian Illuminati ceased to exist, there are many conspiracy theorists who claim that Illuminati exists even today. The well known conspiracy theorist David Icke still argues that the famous group exists today, and it's more secret than ever. Myron Fagan, another famous conspiracy theorists has devoted a large part of his life trying to prove that various important events such as Waterloo and the assassination of JFK was the result of the actions of the Illuminati.

Whatever the truth might be, fact is that there have been more books written on this secret society than about any other in history so far. Not only non-fiction books, but novels as well.

Have You Heard Of The Illuminati Before Dan Brown?

Interesting Documentary About The Illuminati

Popular Books About The Illuminati The Rosicrucians are a society that I've read extensively about during the times I was extremely interested in the occult and magic (not magic tricks, but occult magic). I've read so much about them that I could literally write a book - but since there are already tons of books written about this esoteric and secret society, I will just briefly mention them here. They've really left a mark in my soul, that I have to admit.

The Rosicrucian Brotherhood started officially in Germany, in the early 17th century, when a book called Fama Fraternitatis Rosae Crucis was published, talking about the existence of a fraternity founded by Christian Rosenkreuz.

Soon another manuscript got published (this time in Latin), with the name Confession Fraternitatis, which reinforced all that the first book was talking about, this time however, with more strength and ardor.

A third manuscript was published shortly after under the name of The Chemical Wedding of Christian Rosenkreuz, which was a very weird and intriguing book. Apparently written by Christian Rosenkreuz himself, it described a wedding ceremony of a king and queen where weird and deadly things were happening to the guests through some tests to prove their worthiness. Some of the guests would be killed and then reanimated with some occult procedure.

Needless to say, these three early books, especially the third one cause a great deal of controversy among people in Germany of the time.

Soon after these three documents were published, various Rosicrucian groups appeared all over Europe, with illustrate members such as Isaac Newton, John Dee, Sir Francis Bacon and Robert Boyle.

The secret society is all about exploring the occult, going beyond and outside of the papal church and helping those in need.

The main symbols of the Rosicrucians are the rose and the cross. The rose symbolizes secrecy and silence, while the cross with equal length arms are about the material world. Rosicrucians are all about modesty and promoting it. Their meetings do not commence with secret handshakes and attracting needless attention towards their wealth or fame. Anonymity is what they like best.

Some Of The Recommended Books On Rosicrucian Society 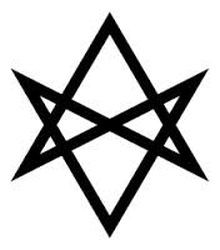 Ordo Templis Orientis (also called OTO) is another famous society mostly known for its famous member and leader, Aleister Crowley, who wrote The Book Of The Law, the main text of Thelema, a religion created by Crowley himself. Over the years Crowley put together the Holy Book Of Thelema, which encompasses everything related to this new religion he created.

This religion promotes individualism, and its main crede is included in this line:

Aleister Crowley, called the Great Beast, is a very controversial figure of the 20th century. Occultist, magician focusing on ceremonial magick, poet and a writer and person with certain deviant ways, he definitely sparked the interest of many who wrote about him and his order, OTO. In fact the press of the time called him openly "The wickedest man in the world".

If you want to check out the OTO website, it's quite interesting and worth a second look.

The Famous Book By Aleister Crowley

5 - Hermetic Order of The Golden Dawn 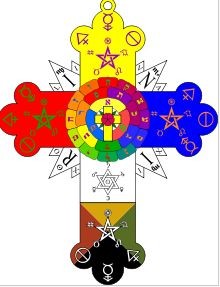 Also simply called The Golden Dawn, this society has a great influence on the Western occult movement in the 20th Century. In fact Wicca and Thelema (which I have just spoken about before) were greatly influenced by the Golden Dawn.

The founding members,  William Robert Woodman, William Wynn Westcott, and Samuel Liddell MacGregor Mathers, were initially Freemasons, as well as Rosicrucians, however here women were also accepted in the order. Btw, Aleister Crowley was also a member of the Golden Dawn.

I have learned and read quite a lot about the Golden Dawn during the times I was interested in learning about magick, astral travel, astrology and tarot as means of divination. While for me this was all a hobby, for many people it is a way of life.

The modern Hermetic Order Of The Golden Dawn has been re-started in 1977 in Columbus, Georgia, founded by Israel Regardie. The new order still follows the traditional teachings and grade structure of the initial one. Basically the new group is all about teaching Hermeticism to the esoteric community of the Western world.

I have read several books by Israel Regardie, including the manual and while the reading is not always easy, if you are interested in this exclusive group, they're well worth checking out.

Also the order of the Knights Templar is a well known group which stems from the original Knights Templars, while still being different from it. The members are all Christian Master Masons (remember the third level of masonry, the most advanced one), however this is quite another society altogether.

Then we have the Order of the Bull’s Blood, the Secret Order Of The Libertines, the Fenian Brotherhood, the famous Bilderberg Group, the Order Of Assassins, Opus Dei, Sons of Liberty and many, many more.

Do You Know Of Any Other Secret Societies Worth Mentioning?

Fascinating subject matter and a good list and overview of secret societies.

This was really interesting. I'd love to read more about why you love the Rosicrucians.

Really interesting piece; thanks for sharing. I haven't heard of the last three but I had heard of Illuminati before Dan Brown's Angels and Demons book. I love all the research he put into it though.

Like Cmoneyspinner, I do love how they're called "secret" but people know all about them. I guess it's the membership that is secret, not the actual group.

Every male member of my family is a member of the Masonic Order - except me. I don't know why I was missed out: some flaw in my character, perhaps? I shall never know.

I don't care about secret societies, but it's always good to know they exist and a little bit about their philosophies.

What gets me is they are called "secret" and people know about them. The first 3 you mentioned I heard of when I was a child. But those last two? News to me! My opinion - not that it's worth a nickle - Secret Societies are Silly. Ain't none of y'all worth mentioning!

Yeah! That's right! I said that! Now be brave. Come out in the open and slap me in the face! :) Good article.

Thanks for sharing this information :) I learn something tonight.

What an interesting post. I remember learning about the Freemasons during history class and the original president was one of them. Fascinating stuff! Born in Blood: The Lost Secrets of Freemasonry
100%  39   15 frankbeswick
Other History