Top Next Generation Consoles in 2014

The video gaming industry is transforming with casual gaming help change the way we buy and play games.

2014 is shaping up to be an exciting one for video game players; the major console developers introduced their next generation consoles and smaller companies began to bring out competing consoles; we’re hopefully in for a ‘game changing’ year. The days of the big three dominating the gaming industry may be coming to an end with the advent of Android based consoles that will snap at the heels of the giants of the industry.

As smart phones become more prevalent and the quality of games available increases it’s inevitable that the transition from phone to console using the same OS will begin to change the way we buy and play games at home. As the ‘cloud’ and the Internet begin to integrate, it’s obvious that console makers need to adapt to the ever changing world and help the gamer empower themselves. Have Sony, Nintendo and Microsoft made mistakes by focusing on producing more and more powerful consoles that are moving away from the gamer, or will they continue to provide the support and infrastructure required to keep them at the top? Only time will tell.

Below are the new consoles that are out in 2014:

Which is the best Next Generation Console?

An Android based open source console.

This really is an exciting development for hardcore gamers. With top publishers and many independent game studios promising games for the new Ouya console it looks like the top three have a genuine contender to face.

What makes Ouya so cool is that it is based on Android and is totally open-source – the company encourages the user to make their own games and software but also hopes that many will delve into the hardware and begin to design their own peripherals. It is very refreshing to see a company that wants to provide the tools to the public and not have any control over what is produced. This is going to be a huge hit with the younger generation who will tinker with this device and certainly ensure that it is one of the most innovative consoles of the year and perhaps the decade.

At $99 you’d think that you were getting a second-grade machine, but it is surprisingly powerful with a Nvidia quad core processor, HD graphics, flash storage and the ability to do whatever you want to it! I would expect to see many companies customizing this little machine and bringing out versions that will blow away today’s top console.

My rating: 5/5 – it isn’t the best console, but with the open-source hardware and software options it will be very popular and also will become more powerful once those 15 year old geniuses get hold of it!

Aiming to take over your living room

Microsoft’s next generation console is more than a gaming machine. Aimed at the living room, the console will revolutionize the way we interact with multimedia entertainment. With 8GB of ram, an 8-core CPU, a 500GB hard drive, a Blue ray drive, HDMI inputs and outputs and a USB 3.0 port, together with an updated 1080p Kinect motion controller and a redesigned hand controller it compares with top range PCs and promises to take in-home interaction to the next level.

The system promises interaction with TV programming allowing for statistics and information to be viewed as you watch sports games or TV shows. The system looks sleek and powerful and while graphics and sound will probably be similar to those available on the current XBOX, the added power and interactivity make this a great addition to any home.

My rating: 4.5/5 – Microsoft seem to be learning from their past experiences and concentrating with producing something that works well with other gadgets, is very intuitive and has enough power to blow away most of the competition. I suspect they are trying to move away from the gaming console into the media device that will become the central device used in the household and the world.

The Sony PS4 seems to be an upgraded PS3 with better graphics, more power and more integration with the online world. Sony are muscling in with their own streaming services and may lose some customers who already love services like Hulu, Netflix, Rhapsody etc. Their Apple-like approach of trying to be the be-all and end-all solution for the multimedia experience may backfire and give their lesser known rivals a foothold into what is becoming a very competitive market.

The Specs of the PS4 are impressive bringing the power of AMDs top chips to the Sony and providing a machine that is close to the power of a top PC – from what we have seen so far the machine looks like it produces amazing HD games and with a better online experience they hope to re-assert themselves at the top of the market.

Overall it seems like Sony have gambled on giving the user the total multimedia experience – this can be good if it is done right, but the modern consumer is beginning to realize that having a choice is a very important commodity.

My rating: 4/5 – there’s no doubt that this is a very good console and sales have proven that it is popular; it will be interesting to see if they can continue to top sales especially as Microsoft have unbundled the XBOX One console from the Kinect.

Perhaps the most disappointing next generation console

Nintendo continue to innovate with the Wii U. While the new Wii isn’t much more powerful than the XBOX 360 or PS3 it is the first console to feature a tablet-like controller that combines motion control and a touch screen. Nintendo, like Microsoft are trying to move away from a purely gaming machine to transform into a truly mult-media machine that allows you to control everything in the living room and potentially even control your house.

The concept is a good one but I feel that this machine is very  underpowered compared to the PS4 and XBOX One, the Wii U is relegated to being just another console.

My rating: 2/5 I don’t understand why it took Nintendo so long to bring out a HD model – this seems to be too little too late. Nintendo do have some major games coming out in the next few months but they have a long way to go to catch up to Microsoft and Sony.

Innovativeidea - but maybe too late to the market.

The Valve Steam Box is essentially a dedicated PC that will use the Steam software to allow users to play PC games on their TV. As it is a PC it will be upgradeable allowing the user to continue to update their console as new technology emerges.

As a PC gamer I’m amazed that no one has done this before. Many manufacturers tried to create multimedia PCs for the living room, but usually the bulk, and the amount of wires required put them off. This little device looks like a console and therefore will be more acceptable to the home owner.

The major problem that they may have is that many people are unhappy with Steam – the fact that you have to be part of the Steam network in order to play some of the top games can often infuriate the owners especially when the Steam network has an outage.

My rating: 2/5 If I am going to use a PC in the living room I may as well use my very high powered one. There’s no compelling reason for me to buy another PC when I have one that can already do the same thing.

Not only are Nvidia providing hardware for other console makers (including Ouya) but they recently surprised the world by moving into the gaming market. Their project shield introduces a portable game console that combines a controller with a six inch retinal screen.

It runs Android Games and has the ability to run PC games with a built-in Steam Big Picture Mode. On paper it looks like a great machine and could be a great alternative to the established consoles.

As it uses Android’s OS it is a very versatile little machine and will appeal to many Smart Phone users. The addition of the ability to play HD PC games gives it the edge over the Ouya in some respects, but the lack of open source may be the biggest downfall.

Amazon are the latest company to enter the casual gaming market. There Amazon Fire TV is currently the best streaming media device on the market, with the largest memory and the best wi-fi abilities.

It stream movies, music etc. far better than any other streaming device I have used. Amazon has also added games to this little device - these games are Android based and while there are not many games on the marketplace yet, they are mostly high quality and fun casual games.

It'll be interesting to see how the combination of streaming media and casual gaming works.

My rating: 4/5 – This is a brilliant little device that has revolutionized the way I use streaming media - with the smart-TV and smart-DVD including applications, and other devices such as the Google Chromecast in competition, I was a little reluctant to buy this - however, with the voice recognition and some of the cool games it is the best small gadget in my house. The only thing it lacks at the moment is full voice support and a LOT of games - this could be a game changer for Amazon. 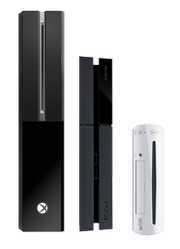