If you like art, history and culture, the McMichael Gallery is worth the trip just north of Toronto. See the originals of the famous Group of Seven and Tom Thompson.

Set in a lovely wooded area, the McMichael Gallery is home to the works of Canada's own Group of Seven and Tom Thomson (who died just before the formation of the group). A guided tour through the gallery will help you appreciate each of the artists on display. The Group of Seven was a most influential and fascinating group of artists, some having studied in Europe, others mainly in Canada.

The gallery actually got its start in the McMichael home as the couple began collecting Canadian art and became friendly with the Group of Seven. In fact, A.Y. Jackson lived in their home for 6 years until his death after he suffered from a stroke. The McMichaels donated their home and land to the Province of Ontario.

A Canadian gallery is not complete without inclusion of First Nation and Inuit art, and marvelous prints and sculptures from Canada's Native Peoples can also be found here.

All photos are my own, unless otherwise stated.

How to Get There

Located in Kleinberg, the map below shows where the gallery is with respect to the City of Toronto. It is easy to reach if you have a car and you can consult the gallery website for driving directions.

It is also possible to reach the gallery by bus from the Islington-Bloor subway station. The gallery website is not very helpful for finding the bus because there is such limited service there. You can click here for a map and the complete bus timetable. On the timetable, look at the columns headed by: Kleinberg and Highway 27. You will see times for going north to the gallery and back south to Toronto. It is doable. However, for more flexibility, you could take a cab to and from the gallery from the Rutherford Road bus stop, given that there is much more service to that point.

As you walk from the car park to the gallery, you are greeted by two large stone sculptures on the way. 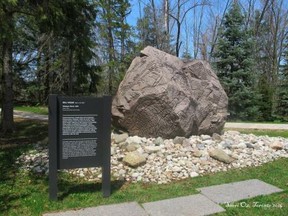 The first, called "Shibagau Shard", was created by Bill Vazan (b. 1933) in 1989. "Shibagau" is the name of the stream from which the piece of pre-cambrian shield granite was found and "Shard" reflects on the archeological term for a broken piece of metal, glass or rock. Vazan designed this stone based on his study of the pictographs of early First Nations peoples of this region of Canada. 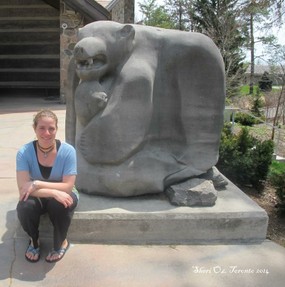 Limestone sculpture is a natural art-form for the Inuit peoples of Canada. A huge sculpture of a bear and her pup is close to the entrance of the gallery (left). It was created in 1969 by Pauta Saila (1916-2009), the well-known Inuit artist who lived in Cape Dorset, a place renowned for its resident artists.

Greeted by a Totem in the Lobby

Note how the frog at the bottom is using a laptop and the enlargements to the right show the owl using a cellphone and the cat using an mp3 player. 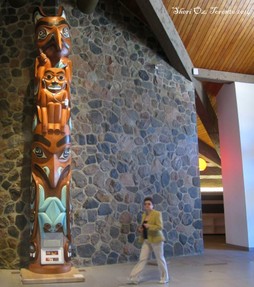 The guide who showed us around the gallery explained that Thomson would often show landscape through the branches of trees in the foreground, such as "The Jack Pine", one of his most famous paintings. Click the image to read more about Thomson.

Her name was familiar to me as an author rather than as an artist - we had to study her writing in high school. So it was interesting to discover that she was a kind of "honorary member" of the Group of Seven. Not formally part of their group, they supported her artistic endeavors.

Having spent time with the First Nations peoples in British Columbia and with the American Indians, many of her paintings drew on symbols from native culture and her experiences with these peoples.

She had engaged in many different occupations, from breeding dogs and boarding horses to pottery before she was able to support herself with her art. The guide in McMichael Gallery suggested to us that her work was somewhat controversial as her use of symbols from the native Americans and Canadians was not always appreciated by them.

Born to a wealthy family, Harris was able to focus on his art throughout his life. He was the driving force behind the establishment of the Group of Seven and the Group of Canadian Artists that followed it.

Our guide at the gallery explained that he was a believer in theosophy (attempting to understand the hidden meaning and connections among the physical, they human and the divine), and he expressed his beliefs in his paintings. For example, for a period of his life, his work relied heavily on yellows (reflecting intelligence) and blues (reflecting spirituality). Also, there were no sharp corners in his images.

Together with Harris, MacDonald was instrumental in setting up the Group of Seven. He served as a mentor for many of Canada's developing artists of his time, helping them find their own "voice" in their work. A poet, he was greatly influenced by Walt Witman and Thoreau, to the extent of naming his son, Thoreau.

He believed that art should reflect the character and spirit of the country in which it is created, teaching at the Ontario College of Art and traveling north to draw and paint during the summer vacations.

Upon his death, the Group of Seven fell apart.

Like most of the others in the group, Carmichael began his career as a commercial artist and it was in this capacity that he met Thomson and others. He traveled with them to the northern reaches of the province to paint the countryside. He was particularly interested in painting in water colors. In addition, throughout his career, he prepared illustrations for Canadian magazines, promotional brochures and newspapers.

Throughout his life he was active in the various artist organizations in Toronto.

In 1932 he began teaching commercial and graphic arts at the Ontario College of Art and was department head until his death.

Unfortunately, none of this artist's works could be found on posters or prints and they are not yet in the public domain; therefore, I cannot show you any examples of his work. If you want to see my favorite painting of his, click here .

He seemed to have been quite the character. He churned out paintings faster than most others and was able to support himself with the sale of his art. He left the Group of Seven even before they disbanded and went off to teach in Winnipeg, for some reason, changing his name to Franz.

Born in England, Lismer began working at a photo-engraving shop at age 13, studying art in the evenings. He later studied in Belgium and moved to Canada at age 26. It seems that he was the one who gave the Group of Seven its name.

Our guide at the gallery told us that Lismer was more family oriented than his colleagues and took his wife and daughter with him on at least one painting trip. His wife modeled for one of his pieces.

Interestingly, he set up children's arts programs in Canada and South Africa, in addition to his duties as vice-principle of the Ontario College of Art.

Born in England, 31-year-old married Varley was persuaded by Lismer to move to Canada. He quickly became part of the developing Group of Seven. During WW I, like, Jackson, he was sent overseas to use his talent to document the war, an experience that changed him deeply.

Some of his works, either by use of color or by their emotional quality, expressed the horrors of war. A move to British Columbia helped moderate the impact of the war and his painting style changed. However, his wife left him and he fell into alcoholism for many years.

Overcoming these set-backs, he returned to his painting and traveling until his death.

Jackson's father left the family destitute and his job at a lithography firm aroused his interest in art. He subsequently studied art in Europe and the United States. He was disenchanted with the Canadian art scene until he was invited to join MacDonald and Harris as they were developing their group of artists who could cross-fertilize each other.

He spent most of his life traveling and teaching in various places in Canada and Europe. Remarkably, he received honorary doctorates from 4 Canadian universities.

Came back to pin a few images.

I really enjoyed your article, Sheri! I also like these styles of landscapes. Lovely page! 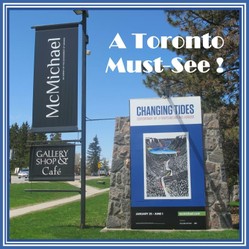