Bodies for the Traxxas Slash SCT and Slash 4x4. If you have a Traxxas slash, you know all about replacing the body.

Will I need a new Slash body?

Traxxas Slash Bodies are the first thing that goes on the RC truck.   They are fast and fun, but end up on their back more times then most would want.  In your yard, on the street, on the track or anywhere there is room to run a Traxxas Slash,  you have to pull that trigger and drive it like you stole it.  So here are the best of the replacement bodies for the Traxxas Slash and Slash 4x4 SCT.

Traxxas Slash 4x4 SCT bodies that come with the truck at the time of purchase are fairly weak and seem to break up pretty easy after a short while of driving your Slash.  Replacing it is inevitable. The three major body making companies are Traxxas who offers a few different replacement bodies for their Slash and Slash 4x4.  I bought one and seemed to bust it up pretty quick too.

Next is Pro Line, who makes quite a few different styles of short course truck bodies.  They get great reviews online and look really cool.

The best SCT Slash body for the money in my opinion is the J Concepts Illuzion Traxxas Slash bodies.  They seem to use a much heavier compound when making the body.  They seem thicker to the touch and take a whole lot more beating before tearing apart.

So what ever body you decide on, paint it to look good and then drive it like you stole it.

for your SC10 SCT BOdy

Most Traxxas Slash bodies come uncut.  This means that the Slash body comes to you in the entire mold and you have to cut it out with some heavy duty scissors or snips.  When you get your new body, and begin to cut it out, don't throw away the excess plastic.

Instead, cut 4 pieces out of the remaining plastic.  Cut the first two into 2 squares about 2 inches by 2 inches.  Square is fine, don't worry about it being perfect.  After you paint your body, glue the squares under the hood centered on the body mount holes on the left and right.  Now when you drill the holes for the body mounts you will have a heavy reinforced body at the worst stress point on the body.

Repeat this for the rear.  When sizing for the rear, you most measure the place where the body mounts go.  Almost every after market Slash body is Different.

When you are all done and bashing your Traxxas Slash, you will have one less weak point to worry about.

Do you Bash? What is the best Body?

Radio Controlled or RC Cars are a great favourite with all age groups, includ... 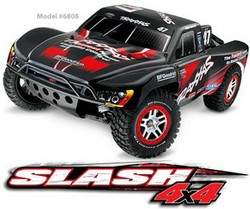 Radio Controlled or RC Cars are a great favourite with all age groups, including adults!
100%  13   4 Marie
Fiber Art