On the hunt for gifts for fans of True Blood's Alcide? Come see what treats we have in store for you!

Fans of Alcide Herveaux are a small, but loyal pack. Who wouldn't be after gazing at a physique like that?!

The fact that Team Bill and Team Eric, and Sookie herself, seem to opt for the vampires says something perverse about them. Alcide is the good guy! He's warm, generous with his time, caring and handy in a fight. Plus he isn't dead, which is unusual for one of Sookie's men.

He should win hands down, but life isn't fair. If you agree, then you may enjoy this little collection of Team Alcide goodies.

Who needs wallpaper, when you can have a shirtless Alcide splashing out of the ocean towards you?  It would certainly help stimulate a few worthy day-dreams.

This gigantic picture is actually billed as a Joe Manganiello giant wall poster, but as he is the actor who plays our man, it's all good. The wall covering comes in two parts, which fitted together complete the scene.

All told it measures 120 x 90cm, or nearly 47" x 35". A Joe Manganiello poster four feet high and three feet across would certainly give you plenty to look at!

"My Name's Alcide Herveaux. I'm Here to Look After You."

Enjoy the first meeting between Sookie Stackhouse and our favorite werewolf building surveyor.

All About True Blood's Werewolf Alcide

It wasn't the greatest start to a friendship or romance. When Alcide met Sookie, it was because he had no choice. As long as his father was in debt to Eric Northman, the vampire could order Alcide into danger.

It doesn't get much more dangerous than acting as bodyguard to Sookie Stackhouse.

Within hours they were in a bar, surrounded by drug crazed werewolves intent upon violence. It only went downhill from there, as their destination was the home of the ruthless Russell Edgington, a vampire positioned right at the top of their state's supernatural food chain.

Alcide didn't need any of this. He had a broken heart to nurse, after his break-up with the love of his life, Debbie Pelt.

But he and Sookie had clicked too. Even if the chemistry between them never explodes into a great romance (and it might), Alcide had gained a new best friend.

Alcide: "I'm on your Side, Sook, Whatever Happens."

For too many uninformed people, it's a two-horse race to gain Sookie's affections. But a lone wolf has crept up on the vampiric bad boys.

Team Alcide fans know that this isn't a case of 'also ran'. The hunky builder has been steadily gaining ground for several seasons. Alcide and Sookie have both admitted that they would be together already, but for one thing. They are both in love with other people.

But a season is a long time in True Blood, and one of those rivals has gone. Who knows what could happen next?

Sookie: "If I knew what was best for me, I'd have fallen in love with someone like you."

You can't argue with those first two slogans. They read:

The final item of merchandise for Team Alcide is that clever baseball cap, which advertises our man's family business. I wonder how many people will know what it is; or if those you pass in the street will think you're heavily into construction.

It amused me anyway.

Team Bill: True Blood Gifts
After gifts for fans of Vampire Bill? Or maybe it's you who deserves a little Bill Compton loveliness in your life? Check out what's on offer!

Team Eric: True Blood Gifts
Looking for gifts for fans of Eric Northman? Or perhaps you want to treat yourself to a juicy bit of Team Eric merchandise? Come on in!

Sookie's Engagement Ring from True Blood
Are you cosplaying Sookie Stackhouse or asking a True Blood fan to marry you? Check out this replica engagement ring inspired by one of the show's most romantic moments.
Updated: 06/08/2013, JoHarrington
Thank you! Would you like to post a comment now?
6

I'll have to see how I can wrap him up for you, assuming that he'd be happy to be gifted. <3

Alcide would do as a gift for me!

I would so do Alexander Skarsgard. Just saying. :) (And we're so going to get battered by Team Alcide, when they find this article.)

The entire show has far too many attractive actors in it. Skarsgard is probably my man-crush

Looking for gifts for fans of Eric Northman? Or perhaps you want to treat you... 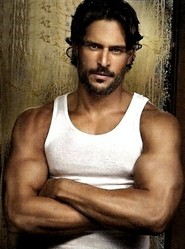 Hosting a vampire themed party to watch True Blood? There are loads of costumes and supplies to bring Bon Temps to your home.
78%  8   8 JoHarrington
HBO 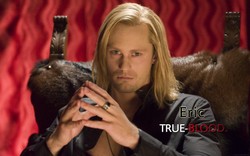 Looking for gifts for fans of Eric Northman? Or perhaps you want to treat yourself to a juicy bit of Team Eric merchandise? Come on in!
Loading ...
Error!