A spoiler-free review of the first season of True Blood. Explore a world where vampires have integrated with society in 21st century USA.

Tru Blood is a brand name, which has changed everything. It's synthetic blood, which comes in a bottle. Vampires can down it, in the same way that human beings enjoy a beer. But it's more than that. It can keep them alive.

In a modern America where vampires no longer need to prey on human beings, constitutional rights are being extended. But not everybody is happy about that. Politicians run campaigns on promises to ensure segregation; and preachers in their pulpits make increasingly less vague threats of a Holy War.

And a serial killer is out to murder 'fang bangers', the human women who date the Undead.

Includes a lot of special features like ads for True Blood and other vampire services, a documentary about vampires in America and public service announcements.

Those on the margins of society don't always have it easy in their home town. Bottled Tru Blood has brought a whole new minority into the open in small-town America. 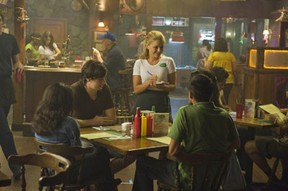 Nothing much ever happens in Bon Temps, Louisiana. That isn't to say that the residents weren't prepared for it though!

Two years ago, when vampires first started 'coming out of the coffin', the local bartender stocked up on Tru Blood. Buoyed up by the national furor, the people of Bon Temps watched in anxious anticipation for an infestation of vampires to plague them.

It didn't happen.  The Tru Blood went off in the refrigerator. No-one so much as glimpsed a vampire, unless they drove out into the big city, where there were whole bars full of them.

Until one actually did turn up in Merlotte's Bar and Grill. Bill Compton wasn't exactly new about town. He was there when it was a collection of homesteads in the middle of nowhere. He helped build the old Compton House on the outskirts of town. When he last left Bon Temps, it was in a grey uniform with a musket over his shoulder.

Yet not everyone is happy to have a vampire in their midst, even a Southern gentleman with old time roots in the area.  Even one going mainstream on Tru Blood. Sometimes the monsters aren't the ones with the fangs, and not every civil right movement was won in the '60s.

Sex and Violence in True Blood

If you are the sort of person squeamish about (mostly) off-camera, heavily implied violence, then True Blood is not for you.  It wasn't gory in a Fright Night kind of way. Much is left to the imagination. But you will occasionally see a blood-splattered corpse on the floor.

Much more explicit is the sex. Just about every episode depicts ladies showing what nature gave them to feed their babies; plus rear views of naked men too.  It seems that the only thing to do in Bon Temps normally is get hot, sweaty and grunty with someone. The camera does linger there.

This is definitely the aspect of the show which has so captured my imagination. 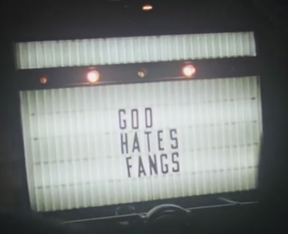 True Blood isn't subtle about presenting vampires as a minority group fighting for their rights.

Rednecks organize daylight lynchings. Televangelists preach fire and brimstone hate in the name of Jesus. Even erstwhile supporters are prone to the odd lapse of casual fangism.

Meanwhile, protest marches are held to demand such basic rights as the ability for vampires to legally be married, or own property. The latter is often the very home where they were born.

I loved how this was done. I loved the debates, both open and implied.  It was all so utterly real. Change the word 'vampire' to 'black', 'gay', 'female', 'immigrant' or any other group, which has had to struggle for their right to be considered equal. Those conversations have happened repeatedly. Those issues have been aired in our own news channels and governmental forums. This is where True Blood's real horror lay.

Then there were the apparent conflicts of interest.  Tara, an African-American, faced down Bill, a vampire who fought in the American Civil War. She asked him if he ever kept slaves. He was forced to admit that his family did indeed have slaves. It's moments like this where the dialogue elevates True Blood from a mere vampire story, into something much deeper and much more profound.

What Are Civil Rights?
Civil rights are those laws aimed at creating social equality. They protect from discrimination in all walks of life.

A new fan was created these past couple of weeks. There's no going back now.

I've long been interested in the vampire genre.  I wouldn't be writing so many articles on Wizzley about then, let alone my own vampire novel, if I wasn't.  It's also the case that I only arranged to watch True Blood, as part of my exploration of the vampire for Wizzley.

But that was season one. I'm already halfway through season two.  I have season three ready and waiting to be watched.  I am looking - quite urgently - to get seasons four and five too. Then I will be caught up.  Season six is being filmed as I write.

I love it.  The story-lines and ideas are different. They're fresh and innovative.  I'm not watching the same old tired cliches, handed down from Bram Stoker and rehashed in a variety of new ways. True Blood has something quite thought-provoking to bring to the table.

Moreover these are stories which can flip from the shallow to the heartrendingly deep in an instant. I watched one episode in floods of tears from start to finish. I had to pause it once, just to grab a handful of tissues in order to carry on.

Nor are the mysteries obvious.  There are feints and sleights of hand, which will direct the attention away from what we should really be looking at. It's really well done.

I'm its latest fan. I'm in it for the long haul now.

True Blood is based on these books by Charlaine Harris

True Blood (HBO): Season Three Of Wolves and Crowns
A spoiler-free review of the third season of True Blood. When the 1% is vampiric, then nobody is safe. Particularly when there are werewolves prowling too.

True Blood (HBO): Season Five Ancient Forces Reawaken
A spoiler-free review of the fifth season of True Blood. The Vampire Authority not only exists, but it's lethal. Worse is in the curses hitherto hidden beneath.
Updated: 05/15/2013, JoHarrington
Thank you! Would you like to post a comment now?
8

I've hurtled through them. I'm halfway through season five at the moment. I watched six episodes today. At this rate, give me until the weekend and I'll be tapping my toes with you.

Can you see how I ended up so obsessed with it now? I definitely concur.

I am up to episode 5 of series 1 - I think it's absolutely terrific.

I'm planning to read the books afterwards. I know that's the wrong way around to do it, but I found the programme first.

That's not a good thing to discover about Bill in the books. I've heard a lot of people moaning about how much Eric changed between book and show too. But no details on that one.

I was a fan of the books before a vast majority of people even knew they existed. I was thrilled when I heard it would be a tv show but sadly I don't have HBO. I figured I could wait awhile until I could find a way to watch it and heard about it from people who did watch it in the meantime. ...That put me off watching it at all. The reason I refuse to see it now? They made Bill a nice guy. He is not a nice guy. He is a rapist. Yes I said it. I think people deserve to know. Sookie herself admits it! I refuse to watch a show that lets a character like that be a good guy. Period. It just isn't right at all. I'm all for character adaptations if they are done well usually, but there are some things I will not overlook when changed. It's also why I gave up on the books themselves.

Ah! I wasn't aware that HBO automatically denoted more license! That's something for me to look out for in the future.

I too thought that the Louisiana setting was perfect, for all the reasons that you highlighted. But also for the accents. I could hear someone from the American South speak all day.

There's something about Bill's accent that's slightly more formal too. I don't know what it is. It must be something in the syntax. But you really do believe that he was around during the American Civil War. The pun happy people at Fangtasia have missed a trick so far too. Not one of them have said, 'Fangly my dear, I don't give a damn.'

That is a very nice TV series indeed. Afterall, it's not just TV, it's HBO! (hence some sex. violence and foul language is allowed :) I remember the first thing that captured my interest back when I first watch it, was the Louisiana setting that the story takes place. What better place to set an allegorical supernatural story against the very real civil rights history of the American south?

Awww! Thank you very much.

True Blood is definitely my surprise find, throughout this whole vampire exploration. I've only seen the first series of the TV programme, but I'm definitely going to check out the books by Charlaine Harris too.

If you think that Bill is easy on the eye, wait until you catch sight of Eric. :)

Jo - Like Cossack I think you are an amazing writer! I am also filled with admiration for the screenwriter (or was it a novel first) who thought of this new take on vampire blood, thus opening up a whole new way for vampires to live in the community and the problems that might cause. Yes, civil rights for vampires!! I am going to get the first one!! It looks like my kinda movie. Oh, er, and I quite like the lead guy...

Yay! I'll be on tenderhooks waiting. :)

Hosting a vampire themed party to watch True Blood? There are loads of costumes and supplies to bring Bon Temps to your home.
100%  30   12 JoHarrington
Vampires