A spoiler-free review of the third season of True Blood. When the 1% is vampiric, then nobody is safe. Particularly when there are werewolves prowling too.

In season two of 'True Blood', we learned that there was a vampire queen. With absolute power over her realm, even the likes of Eric Northman bent the knee to Queen Sophie-Anne.

Hierarchy, in the vampire world, went much further and much higher, than our little glimpse of the Undead in Louisiana. And what is The Authority, served so loyally and brutally by the Magister?

In season three, questions of power take on a special significance. It's immortals playing the game of thrones; and that cannot end well.

True Blood Asks Who Holds the Real Power in Society 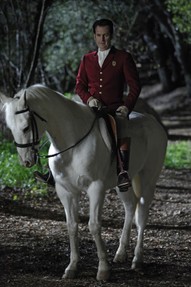 I doubt that there's any grown adult on the planet, who doesn't consider their government to be full of self-serving lunatics.

But when those world leaders are immortal and cannot be voted out of office, that view becomes especially true. What do they have to occupy their time? Other than engaging in petty war against each other, or adding to their own fortunes?

The third season of True Blood explores the question of power and authority. Time and time again, we are reminded that individuals rule only with the mandate of the people.

It doesn't even have to be a democracy for this to be true. Revolutions can and do happen. Trusted advisers might pursue their own agendas. Fealties can shift and undermine everything.

Questions of where true power and authority reside run like a seam through True Blood's third season. However this is an Alan Ball script, based on a Charlaine Harris story. It's all much more complex than mere warring monarchies. Governance has so many more forms than that!

There's the power residing in parents over their children, or employers over their staff. Spouses demand respect and compromises in a marriage. There's the authority invested in law and order, and the politicians who write legislation. Publicity and the media can sway opinion on a massive scale. Peer pressure crushes into us the power of conformity. In even darker hues, a psychopath commands absolute dominion over their victims. The alpha males and females force submission through threats, violence and sheer personality. Love and drugs can direct through addiction.

Given that vampires are involved, the maker can issue orders, which cannot be refused. And blood-feuds can last a millennium.

Then there's the hunt. The pack pursuing a single prey, who may escape only if it's swift or ingenious enough. But what if the hounds were werewolves? Or other were-creatures? What chance does the hunted have then?

True Blood goes all out in this season on such themes. Shakespeare wrote, 'uneasy lies the head that wears a crown'. This series explains why, not just for human society, but for vampires and other supernaturals too.

A Supernatural Presence in Bon Temps

Since the very first season, True Blood has been about more than humans and vampires. The preternatural lurked from the moment we realized that Sookie is a telepath. Other species, like shape-shifters, have filled the sub-plots too.

The third season of True Blood marks a real explosion in supernatural beings. First and foremost are the werewolves. Their existence was more than hinted at in previous seasons. We see them now.

Lou Pine's Bikers Club is the werewolf equivalent of Fangtasia. Once inside, we discover that werewolf politics is just as deadly as its vampiric counterpart.  Amongst the multitude of packs, one is very dangerous indeed.

Remember when we were mostly concerned with how Bill and Sookie could form a relationship? We're way past that now! 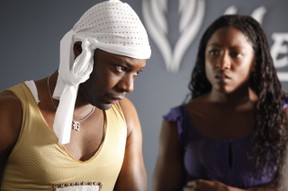 There were so many sub-plots in the third outing, that things quickly became very complicated.

It didn't necessarily seem so at the time. Alan Ball's skill as a director saw to that. But the scale of the interweaving meant that it took a while for some scenes to resolve.

Every tale had merit. It was all fascinating and kept me asking the key question, 'what happens next?!!' But there were so many of them.

We might be thrilled by an instance with the Mickens. But we'd have to travel through scenes with Jason and his new lover Crystal, then Sookie on the trail of Bill, then Tara in a truly terrifying situation, then Eric recalling the past with mixed loyalties and vengeance, then werewolf pack politics, then Jessica's teenage vampire issues, before we finally learn how Tommy Micken reacts.

I barely cared by then. I was too side-tracked by caring about every other character! But now my interest would be rekindled and off we'd go again.

Season three of True Blood is no longer just about Sookie and Bill. It's best approached as a buffet, rather than a single delicious course. The stories are told on an epic scale, spilling way out of Bon Temps. Our people are spread out across half of the American South.

I loved it, even as I had to put the effort in to keep pace with all of my people. In its sheer complexity, this was True Blood at its best.

These collectible editions are for the Blu-Ray version. They each depict a single character on the cover.

A Wiccan in Bon Temps

We weren't quite done with religion in season two. Holly is a Wiccan, and so am I. 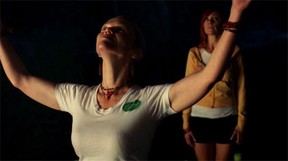 Amidst all of the supernatural furor, a Wiccan started working at Merlotte's Bar and Grill.

As a Wiccan myself, I waited and watched to see how this would play out. I'm way too used to television shows getting it wrong. They either make it all much more dramatic than it really is, or else turn us into deluded fluffy bunnies in stick on fairy wings.

True Blood took the middle ground. There was an emphasis on herbalism, which is fair enough. Though it would have been nice if the reason for the decoction was a little less controversial. I also found nothing to complain about in the fact that Holly took Arlene into a forest, then raised a circle.

From the point of view of the storyline, what happened next was nicely done. It wasn't too dramatic. We didn't get the Mother Goddess appearing in all Her glory, nor anything too over the top. It captured the general feel of a Wiccan circle, while serving the purposes of the plot.

But as a Wiccan, I couldn't stop laughing. There was absolutely no understanding about what various tools did in a circle. From the moment I saw Holly trailing salt widdershins, I knew this was not going to be entirely accurate.

My eyebrows raised when words like 'invoked' and 'summoned' were used with the Goddess. I have no idea what was going on with Holly's athame. It looked the part, but she was merely waving it in the air.  You really do not use it to prick your finger for blood. I'm not saying that blood magic doesn't exist, but not with your athame! Nor would it feature in this kind of situation.

As for the repetition of 'Blessed be', I was in hysterics laughing. It quite ruined the solemnity of the scene for me (and probably for every Wiccan watching). It wasn't only used out of context, but in a way which was utterly meaningless.

If you're a Wiccan, beware this scene. It's not offensive, but it is hilarious. Bless them. They took enough Wiccan imagery and tools to make it seem vaguely authentic. Kudos for that. But Alan Ball really should have brought a Wiccan adviser in to help direct it.

Or grab a poster of the cast of True Blood from Season Three.

10 Things You Might Not Know About True Blood's Bill and Sookie
... or, at least, the actors who play them. I know that my jaw gaped, when I learned a few of these. Not to mention a certain amount of delighted cheering.

True Blood (HBO): Season Five Ancient Forces Reawaken
A spoiler-free review of the fifth season of True Blood. The Vampire Authority not only exists, but it's lethal. Worse is in the curses hitherto hidden beneath.
Updated: 05/16/2013, JoHarrington
Thank you! Would you like to post a comment now?
8

It took me a moment to find that. It's on the poster isn't it? And yes, it is a bad pun. LOL

There are all sorts of supernatural beings in Bon Temps, as the series goes on. But vampires are the main event.

Werewolves as well? I thought this was a programme about vampires.

A spoiler-free review of the second season of True Blood. Learn more about th... 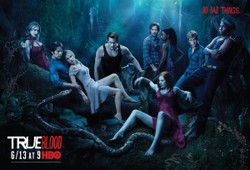 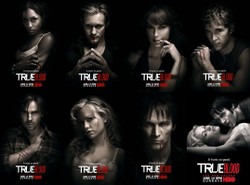 A spoiler-free review of the second season of True Blood. Learn more about the world of vampires living openly in the American South; brace for the backlash against them.
88%  8   9 JoHarrington
Party Themes