The greatest love of all is wanting to make the world a better place. How about a gift that says I love both you and your cause?

It is a touching scene that captured the hearts of Occupy activists and became an internet meme.

A couple lie in the chaos of police putting down a protest in Oakland, California. Carnage edges the landscape. People flee the violence. But the couple lie still, in an oasis of peace. Behind the brutality of an officer wielding a baton, they kiss.

It's romance upon the battlefield and a powerful reminder that love conquers all.

Love Tokens for Someone Who Wants to Save the World

There is a time for politics and a time for romance. This Valentine's Day you could combine them both.

It may be their passion for their cause which originally attracted you to them. The fire in their soul and the flashing fury in their eyes, as they survey the injustices that they wish to put right.

These are people with big hearts and endless compassion. It is a love bigger than themselves, which explodes out into fighting for their community or the whole, wide world.

Valentine's Day can seem trite beside all of that, but it doesn't have to be.  On February 14th, your gift or card could say loud and clear that this is why you love them. You embrace their battles like you embrace their bodies. You appreciate the whole package.

You are the right person for them.

It will take more than a nice bunch of flowers to communicate this claim, so let us run through some of the alternatives. Let's look at some of the ways in which Valentine's Day tokens might match your loved one's activism.

Poll: Do you find activism sexy?

The Campaign for Nuclear Disarmament

This symbol was originally designed to protest atomic weapons. Today it's largely used as a catch-all peace sign.

In 1958, the artist Gerald Holtom was preparing to join a protest march from London's Trafalgar Square to the Atomic Weapons Research Establishment in Aldermaston.

Like creative people everywhere, his world-view was aesthetic and he wanted a banner. What could neatly convey his message?

He aimed to say that the planet would be much better off without nuclear bombs and the constant threat of a truly devastating war.

Holtom took his inspiration from the semaphore flag alphabet, which was so widely used by the armed forces. He gambled on the fact that military observers would completely understand this symbolic language.

The resulting peace symbol super-imposed two semaphore letters. 'N' is shown by an individual holding two flags downwards, at 45 degree angles from their legs. 'D' is practically a straight, vertical line. One flag is held aloft, high above the signaler's head. The other points down.

Between them they create the inverted V, cut through with a line, which makes up the universal symbol for peace. The ND stands for 'Nuclear Disarmament'.

Send a card or present a love token with the CND Peace Sign on it. It'll show that you love the cause as much as your sweetheart.

Valentine Gifts for an Online Activist

One of the best ways to get the message out, raising awareness on a host of issues, is to take to cyberspace. If this describes your love, then we have something for you.

The internet is the great medium through which information is disseminated in the Age of Technology.

For any activist wanting to reach a large number of people, then nothing can be better than a website to spread the message.

Anyone fighting for any cause will be heading on-line, but right now we're looking for romance with those whose cause is the internet. They will be adhering to the Hacker or Cyberpunk Ethic, regardless of whether they are members of a headline grabbing collective.

They will be fighting all attempts to centralize, restrict or otherwise censor access to cyberspace. They will be defending freedom of speech and expression; and they will be ensuring that any and all information is freely shared across the globe.

Only a minority of politically aware cyberpunks are hackers. The vast majority spend their on-line lives raising awareness in petitions and websites. They are the people bringing information to the masses. Their activism takes the form of devising the right language to communicate all that needs to be said.

Of course, being geeks, this language is usually HTML or PHP.  As their Valentine, you want to ensure that it's all happening around your CSS.

A whole lexicon of memes and slogans has built up around internet activism. You can use it to spread your own message this February 14th.  'We never forget' could apply to more than a statement of purpose from Anonymous; and what could be more romantic than declaring 'all my base are belong to you'?

Gift Ideas That Say Less Than Three to your Hack-tivist

Buy a Valentine's Day present that speaks the language of the internet. Then watch as 4ll their base r b3long 2 u.

Gifts for an Occupy Activist on Valentine's Day

Is your beloved campaigner the sort to set up a tent in the middle of the street to protest social injustice? Come on in!

Since September 17th 2011, activists have been camping out in public places raising awareness of inequality, social injustice and the collapse of political discourse.

It is probably the most famous groundswell of popular protest on the planet right now. Across the world, all manner of marching, chanting, song-writing, letter/e-mail writing campaigns, gatherings, hack-tivism, art, journalism and meetings are happening in its name.

This is the Occupy Movement, which has found its most visible center in Liberty Plaza (Zuccotti Park) in New York City.

Activists involved in it have been arrested, beaten and shot defending their right to peaceful protest. The famous photograph which heads this page was taken during one of its demonstrations, in Oakland, California. The woman depicted had been injured by an officer's baton, hence being on the floor in the first place.

They found time for romantic love, even in those difficult and painful circumstances. This Valentine's Day could easily be your moment to declare the same for your Occupy activist. After all, the entire movement is based on love, community and the deep emotion of the heart.

Valentine Tokens Suitable for the Occupation's 99%

Occupy your loved one's heart with a romantic gift, which touches upon their politics too.

Did you know that St Valentine was an Activist?

He was possibly a priest, who was killed for presiding over marriage ceremonies against the wishes of the Emperor. It is a story steeped in mystery, which may or may not be true. The legend goes that Valentine was a Christian priest at the time of Emperor Claudius II.

This was not a great time to follow the teachings of Jesus Christ. Worshipers more often found themselves fighting for their lives in the Colosseum than embracing old age. Yet secretly conversions took place and their numbers swelled.

For those rebellious couples wishing to marry within the tenets of their religion and the Church, this era was especially dangerous. Anyone witnessing that could expect a reward for reporting them to the authorities. Moreover, the defiant couple would have to find a priest.

Father Valentine was a courageous man. He officiated over many of these marriages, until he was eventually discovered. Then he was arrested and locked away. There was no mercy from Claudius II. The Emperor ordered the execution of the Christian priest.

Valentine was reputedly stoned and beaten to within an inch of his life. Then he was beheaded, as a warning to all who would follow.

But Christians of the time fought hard for their right to worship according to their own spiritual path. They eventually secured safety for their religion and, in 496 CE, Pope Gelasius I canonized the martyred priest as St Valentine.

Impossibru! A Marriage Proposal by Internet Meme
'Will you marry me?' is one of the most nerve-wracking questions a man can ever ask. Tim came up with a very modern way to woo his Audrey.

Welsh Love Spoons: A Thoroughly Celtic Way to Say I Love You
For centuries, Welsh women have got the message when presented with a hand-carved wooden spoon. It means he's very interested indeed.
Updated: 01/16/2015, JoHarrington
Thank you! Would you like to post a comment now?
4

Plus one! Activism is most definitely sexy. It shows that they have passion and they care. It also, dare I say, demonstrates that they are thinking about the world around them.

I smiled over that pepper spray cop one and the Anonymous Valentine's Day card. <3

Activism is most definitely sexy ;)

Greeting cards for your Valentine are sweet when they come from Sandyspider G... Your love is obsessed with 'Outlander'. Jamie and Claire aren't your rivals, they're your way into your sweetheart's affections. Explore 'Outlander' themed Valentine goodies.
100%  31   15 sandyspider
I Love You Tributes 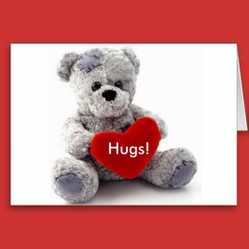 Greeting cards for your Valentine are sweet when they come from Sandyspider Gifts on Zazzle. Sandy Mertens on Amazon offers beautiful Valentine cards that come in sets of 6 to 12.
Loading ...
Error!