Berlin, the Wall and Socialist Architecture

Berlin, the capital of Germany, is a sprawling city as big as greater London or New York. From its famous Checkpoint Charlie, to the Reichstag, the seat of the German Parliament, Berlin has become an intriguing tourist destination.

Berlin is also the also the city of architects, planners, socialist architecture and the Wall. Even though it no longer exists, the Wall is Berlin's most popular tourist attraction. After its collapse, Berlin was left with lots of large open spaces of derelict land. Potsdamer Platz and Alexanderplatz were rebuilt from the ground into buzzing shopping areas.

The Berlin Wall went up in 1961 and ran right through Potsdamer Platz. The west and east had each had each their own city centre. During my first weekend in Berlin, I found it difficult to decide what was considered to be the city centre. Is it Unter den Linden Avenue, Kurfürstendamm, Alexanderplatz or Potsdamer Platz?

Historic Mitte's most famous landmarks are Brandenburg Gate and the dismantled Berlin wall. Berlin Mitte was traditionally the seat of Government and still is. Judging from the long queue waiting to be whisked off to the top floor for the 360° view of Berlin, the Reichstag is not only the Parliament building but also a popular tourist attraction. The building underwent a complete makeover when architect Norman Foster added the glass dome.

Do your shopping in Friederichstrasse and in particular at dazzling Galeries Lafayette. Amble along Unter den Linden, Berlin's answer to Avenue des Champs-Élysées in Paris. Potsdamerplatz once bisected by the Berlin wall is a showcase of modern architecture. At nightfall, watch the light show of changing colours in the Sony Center. Sit under the glass canopy whose supporting beams resemble spokes in a bicycle wheel. Eighteenth century Gendarmenmarkt flanked by two cathedrals is a stark contrast to Berlin's contemporary architecture.

Alexanderplatz buzzes with shoppers and commuters. The Fernsehturm soars 368 m high, a beacon not easily missed. This socialist-style Alexanderplatz was the gathering spot for hundreds of thousands of workers who lived in the monochrome apartment in East Berlin. Stroll along Karl Marx Allee – an open-air museum of GDR (German Democratic Republic) architecture. The wide avenue runs for just over two kilometres from Alexanderplatz to Franfurter Tor. Thousands of comrades would watch the military parades from their apartment windows.

Spend an hour or so in the DDR Museum and see what everyday life was like in communist days. It is not only about the Stasi and the Wall but also the Trabi and nudist beaches. It was everybody's dream to possess a Trabant car but it took years to be delivered. They were cherished and well looked after Today, you will still see an occasional Trabi in Berlin streets.

Hidden behind the Berlin Wall, Scheunenviertel a poor area that was home to immigrants fell into decline during the cold war. Today it is reviving. Art galleries, swanky boutiques and trendy cafes spring up in almost every street.

Scheunenviertel's main hotspot is Hackesche Höfe, a huddle of restored courtyards. It is the ideal place to do some shopping and drink 'Kaffee mit Kuchen'. Stop for a moment in the first courtyard and look up to admire the Art Nouveau tiles that festoon the facades.

A reminder of the Jewish past is a sculpture of thirteen fatigued women commemorating the Jewish victims of Fascism. You can find it in front of the Jewish Cemetery in Oranienburger Strasse.

What is the Best Berlin Guidebook?

This edition of Lonely Planet Berlin City Guide was published in March 2011. The city is changing so rapidly that  an up-to-date Berlin guide is absolutely essential. All points of interest are covered. Practical information includes opening hours and addresses of museums and monuments. A big plus is the extensive list of accommodation ranging from luxurious hotels to simple hostels. It is one of the few guidebooks to mention Kunsthaus Tacheles, the 'Sistine Chapel of Graffiti'. Berlin neighbourhoods are described one by one, accompanied by detailed maps. Best of all are the self-guided walks, detailed description of the sights and a clear map.

How to Make Money Online

Have you joined Wizzley yet?

Want to make money online (like me) while writing about something you know?

I was in Berlin quite a few years ago. The one thing I remember about it was seeing military tanks in the city. I really enjoyed visiting Germany.

I always traveling to Europe with your online articles. Thanks. 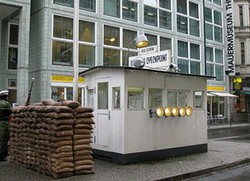 No matter if you travel to Germany for fun or for work, knowing when the different public German Bank Holidays are will help you to avoid closed shops and find out about some ...
45%  5   4 mivvy
Germany