The mere fact of being born into our species entitles you to human rights; but do you know what they actually are?

People talk about length about their human rights, waving them around in matters both frivolous and deadly serious.

But could you reel them off?

Human Rights have only been enshrined in international law for sixty years. They have been subject to constant attempts at erosion by our governments. The press laud them or vilify them according to the agenda of each publication's editor.

There are plenty of politicians and business people who wish that Human Rights would just go away. They probably will, if you let them.

All About Human Rights and the Real World

Without the rights of the human, the society in which you live might be a very different place. 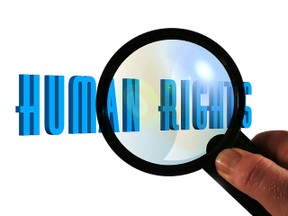 Human rights cover a broad spectrum of articles, which can be grouped into three categories: the right to life and political participation; the right to economic, social and cultural equality; and the right to peace and a clean environment.

Each enshrined part has sustained frequent attack, in even the most apparently enlightened nations; and the last is the most contested of all.

It means, for example, that an individual perceived as a troublemaker could quietly disappear, if a case could be made for that being for the good of the country. Human rights are what makes this more difficult.

Yet it is naive to think that these rights are welcomed with open arms by those wielding power. No matter what the ideals and principles of a politician, at the back of their minds has to be the notion that governance would be so much easier without interference from their populace. For a start, they wouldn't have to stop half-way through making headway in order to concentrate on winning the next election.

A country's economic growth flourishes under slavery, the absolute monopoly of markets, and the freedom for one nation to help itself to resources, all over the world and without charge, while ignoring the people who actually live there.

The military pipe dream would be to own, in vast quantities, the most destructive arsenal on the planet. World domination is the true ideal, but failing that, then having every other nation so afraid that they don't resist a thing will suffice. Being perceived as too impregnable to attack is fantastic; alternatively, it would work if the rest of the world's population was too fearful of the consequences to even contemplate aggression.

That's wealth, sustenance and security covered. As for home-grown dissent, the freedom to round people up off the streets, and shove them into concentration camps, has proven effective. Anyone could go in there, without trial - criminals, undesirables, people who looked at you funny. It would soon remove the problem. The weak and otherwise useless would face certain death. The rest could be slaves or act as human test subjects in medical experiments.

The major thing stopping any government from attempting all of this is the concept and actuality of human rights. They are what makes us valuable as individuals.

Buy a copy of these vital articles to stick on your wall, so you may never forget.

Poll: Do you know what's in the Universal Declaration of Human Rights?

The Universal Declaration of Human Rights

On December 10th 1948, the United Nations General Assembly formally adopted a bill of rights. It defines 'fundamental freedoms' to this day.

Article 1: All human beings are born free and equal in dignity and rights. They are endowed with reason and conscience and should act towards one another in a spirit of brotherhood.

There are thirty articles in the Universal Declaration of Human Rights. It would be too simplistic to say that this was the beginning of fundamental protection for all citizens of the world; but it's the most important document to date.

Centuries of protest and struggles made it possible, but it was the horrors of the Holocaust which finally prompted it into being. Germany's Third Reich were not the first to use concentration camps (they're not even the last), but the sheer scale of it stunned everyone.

Nobody will ever know the true figures for those who perished in the gas chambers, or through arbitrary violence, torture, scientific experimentation, starvation or neglect. Jews, gypsies, homosexuals, political dissidents, Roman Catholics, Jehovah's Witnesses, criminals, the disabled and mentally ill, conscientious objectors, Poles, Czechs, Hungarians, Slovaks, the list goes on; and millions of them were killed.

Others survived, with lives wrecked, only to die more slowly through their own trauma or long-lasting physical effects. For the rest of Europe, there was the Second World War, with all the psychological and bodily carnage that produced.

Afterwards, the shell-shocked cry of 'never again' found expression in this document. Signed and ratified by most of the countries around the world, it remains your strongest protection against human rights abuse.

Learn about the Universal Declaration of Human Rights

Everyone should know these off by heart. Buy a copy today so that you do too.

It's too tempting to think of the struggles for human rights as something historic; or to assume that nothing too bad could happen today.  Sadly, a quick glance at any Amnesty International website would soon disabuse us of that idea.

In order to illustrate what constitutes a violation of human rights, I will select just one case per category. There are many more besides. These are all taking place as you read this article, thus neatly demonstrating such things do still occur.

Inspired by the Arab Spring, protesters want political reform in Syria. Their government responded with violence.

In December 2011, the United Nations reported that over 5,000 Syrians had been killed. This is in addition to mass arrests, torture and people who have simply disappeared. The situation has since escalated.

This is an example of the abuse of the right to life and political participation.

Inadequate living conditions; politically ingrained social prejudice; denial of jobs and healthcare; and an erosion of their culture. These are just some of the issues faced by today's travelling communities.

In December 2011, Hindu statesman Rajan Zed accused Europe of allowing a worsening apartheid against its Gypsy and Roma populations.

Two months later, his sentiments were echoed in The Council of Europe. A report by its Human Rights Commissioner, Thomas Hammarberg, found 'still blatant' discrimination against Roma and Travelers across 47 countries.

This is an example of an attack on the right to economic, social and cultural equality.

One of the world's most important wetland ecosystems is also home to 31 million human beings. None of this counted for much, when oil was discovered in the Niger Delta.

Desperate to fuel the huge Western need for petrol and gasoline, the oil barons swarmed with Shell at their helm. The Nigerian government wasn't strong enough to withstand their demand to drill and extract this precious resource.

An estimated 6,800 leaks a year, plus waste dumping, destroyed the habitat and impoverished the people. Armed conflict quickly ensued.

This is an example of a violation of the right to peace and a clean environment.

Current News About Shell Oil and the Niger Delta

Help spread awareness of human rights. Buy a t-shirt with one of the articles emblazoned across your chest.

What Are Civil Rights?
Civil rights are those laws aimed at creating social equality. They protect from discrimination in all walks of life.

One For Ten: Innocent People Freed from Death Row
Documentary film-makers are set to launch an anti-death penalty campaign. They will travel across the USA interviewing those exonerated of all crimes.

How to Deal with Holocaust Deniers
What do you do about a Holocaust denier in your midst? Is this a time for confrontation or not feeding the troll? A Holocaust historian informs the debate.
Updated: 03/15/2014, JoHarrington
Thank you! Would you like to post a comment now?
6

Frank - Those examples are back to people attempt to water down our human rights. As long as your country signed that declaration, then your government (and everyone else) should be bound by it. It's a sad indictment when they aren't.

cmoneyspinner - Yet governments all over the world seem intent on watering down those human rights. It's our job to see to it that they don't succeed.

I agree. It is important, though to emphasise the concept of natural rights as opposed to civil rights. Natural rights are those rights embedded in human nature, a reflection of our shared personhood. Not everyone agrees with them, some believing that rights are granted by society [utilitarians for instance.] These people believe in civil rights, probably just as strongly as believers in natural rights, but they have not the secure foundation that natural rights provide.

What I really detest those people who try to redefine freedom as obedience to them. I heard one left wing extremist once say that freedom is obeying good laws, made by him of course. Another declared that he believed in positive liberty as opposed to negative [in layman's language, he believed that freedom was obeying him and his mates as opposed to what more mortals think it is.]

We all what our human rights are and we especially know when they're being violated.

If we trust and wholly rely on "authorities" to define and defend them, this world will be filled with miserable people!

So I noticed with all of the comments! Thank you very much for reading them. <3

And I'm glad that they were informative.

Just got to the end of all your human rights and death penalty articles. Well written and good information there, Jo. Keep up the good work.

I agree that the importance of human rights can never be over-stated, as your country knows more keenly than most.

Thank you for your kind words. :)

It is very important we all learn those rights, because they are there for us. And we have to fight for those rights. Thank you for this article. All of us can learn a lot of stuff reading your article. Very informative and well written!

You're very welcome. Thank you very much for reading it and taking the time to comment. <3 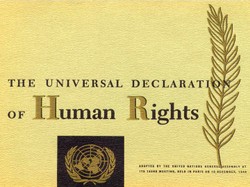 Civil rights are those laws aimed at creating social equality. They protect from discrimination in all walks of life.
100%  33   11 JoHarrington
Human Rights

Have you ever really imagined what it would be like? You or a loved one given that date and watching it draw near. Knowing that you will be killed.
Loading ...
Error!