A look at the shaggy dog story joke format including an example of such a story.

One of the most unusual forms of joke is the shaggy dog story, possibly because of the pain it inflicts on the audience who have to listen to a long, rambling tale only to be disappointed by the ending. And there lies the fun. Confused, well read on to find out what it is that makes shaggy dog stories so attractive.

The shaggy dog story is one of the oldest forms of jokes, probably dating back till when humans could first talk, or at least could sit round a fire of an evening and entertain each other by telling stories. This is because the point of a shaggy dog story is that it is a story, in that it is not a quick fire joke or riddle, but a narrative that can last for several minutes or longer, sometimes having other stories and jokes embedded within.

What is traditional about such a story is that the ending is disappointing, and thus often more funny because of that. For example, the ending could be a corny pun or the story could just stop, with nothing really happening. The skill in telling is to build up the expectation of the audience for a suitable climax and then to let them down. The humour is when the audience realises they have been had, thus never start a shaggy dog story by announcing that its what it is.

Though shaggy dog stories have been around for some time, the name “shaggy dog story” is much more recent. There are various claims to be the original story and the truth of that is probably lost in time forever. However, one of the most likely candidates is the tale of a boy who is given a shaggy dog for Christmas, and this is one of the most shaggiest dogs anyone has ever seen. The boy cares for the dog and loves it deeply, and then one day it goes missing. The story then varies depending on the teller with various anecdotes about his searches to find his shaggy dog, with advertisements in newspapers, treks around the world and so on. The climax, or rather anticlimax, is when he hears about a dog the other side of the world that he is convinced is his and overcomes great difficulties, which vary each time it is told, until he is finally presented with the dog, which he looks at with disappointment and says: “Not that shaggy.”

Example of a Shaggy Dog Story

The Three Lions public house in rural England was suffering in the recession. Trade was down and the landlord was close to calling time and shutting the bar for good. One day, after a tough meeting with his bank manager, he was walking back to the pub and he passed a pet shop, and in the window he saw a dog with an incredibly long tail; an idea dawned. He went into the shop and bought the dog. When he got back, his wife was furious at him for wasting money, until that is he told her his idea.

The man, you see, had realised that the dog’s tail was probably a world record length and once this was known it would become an attraction for the pub. So he contacted the Guinness Book of Records and got the dog listed. A few press releases later, and all the national newspapers, and probably a few writers on Wizzley, covered the story of the dog with the world’s longest tail.

Soon business was booming as people came from far and wide to see the dog. The landlord had to build an extension to the pub and hire extra staff, and the local council widened the road to cope with the increased traffic. But then tragedy struck. The dog wandered off onto the new busy road and was struck by a car and died. Distraught, the landlord didn’t know what to do until his wife had an idea. They could always stuff the dog and have it mounted above the bar. People would still come to see it. So the landlord contacted the local taxidermist who looked at the dog’s remains and said the dog was too far damaged by the car accident to be stuffed. The only thing not damaged was the tail. So the landlord decided to have the tail stuffed and mounted behind the bar, which is what he did and though it was not as big an attraction as the dog itself it still brought in a steady stream of customers.

The dog, meanwhile, had gone to heaven and was standing at the Pearly Gates receiving some bad news from Saint Peter. Even though he had been a good dog all his life they couldn’t let him into heaven without his tail. It had to be the whole dog or not at all.

The dog therefore went back to Earth to retrieve his tail. He arrived at the pub at two in the morning, and all was dark and quiet. He flew to the landlord’s bedroom window and tapped on it with his paw. After a few minutes and a few more taps, the landlord opened the window and looked with surprise to see his dog floating outside.

“I thought you were dead,” he said. “I am,” replied the dog, “I am a spirit.” The landlord wiped the sleep from eyes and said: “So what do you want?” “I’ve come for my tail back,” said the dog, “so they will let me in to heaven.” The landlord thought for a second and then shook his head. “I’m sorry,” he said, “but we are not allowed to retail spirits after 11pm.”

StevenHelmer, Thank you for practical information, pretty pictures and product lines.
Do you know why it is though that a shaggy dog was selected over anyone or anything else?

In London, what does going up the apples to have a butcher's mean? 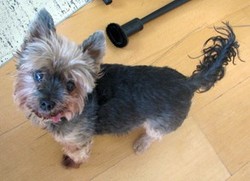 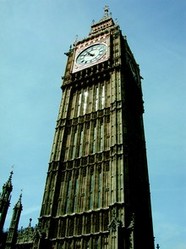 In London, what does going up the apples to have a butcher's mean?
100%  12   11 PeggyHazelwood
Comedy Show