What is it about bats?

It's the season to think about bats, but has Hollywood done a disservice to the little animal? What is the truth about bats and why are they in trouble?

Hollywood has vilified bats in many people’s minds. The myths about bats include the fear that they all carry rabies. Actually, very few ever do contract rabies and when they do, most often they do not become aggressive, but die rather quickly. (That doesn't mean you should ever pick up a bat, alive or dead, or any wild animal that can carry rabies.)

Bats are the only true flying mammals. While baby bats are born blind, they soon gain eyesight and can see quite well. Most are colorblind and they navigate by echolocation.
They are not attracted to hair but try to avoid humans as much as possible. While they may come close to a human if there is a swarm of insects around, their superb sense of echolocation can detect something as fine as a single human hair. Bats are not filthy as some think. They are actually quite clean and groom themselves like a cat.

Books and Movies About Bats

Bats are so important to our world that the United Nations has declared 2011-2012
as the Year of the Bat.

Most bats, and especially those in North 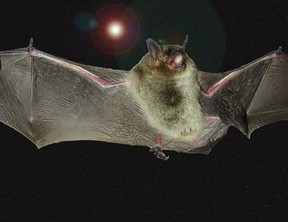 America, eat insects. A single brown ba can consume between 3,000 to 7,000 mosquitoes in a single night.They reduce the mosquito population and therefore the incidences of diseases that they carry. Diseases like West Nile Virus would be more prevalent without the aid of the bat.

A population of bats can consume thousands of tons of harmful insects that infest the crop lands and forests annually. The Mexican free-tail bat is known to feast on a moth called the corn earworm moth (otherwise known as the cotton bollworm, tomato fruitworm, etc.) that costs farmers 1 billion dollars in crop damage annually.

By eating insects, bats reduce the need for chemicals to protect crops. These chemicals have their own host of problems as they spread by the wind and run off into water supplies Chemicals also kill beneficial insects such as bees and have been linked to cancer.

A few species of bats feed on nectar and help pollinate plants. Bananas, mangoes, cashews, dates, avocados, peaches, cloves, and figs (to name a few) depend on bats for pollination and distribution of seeds. Without the bats, the plants would not thrive and provide food and shelter for other animals. The ecosystem in general would be weakened.

Photo of Grey Bat by USACE - in the public domain 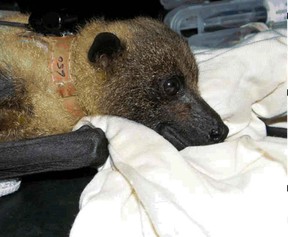 Many people have learned about bats recently with the media news about the White Nose Syndrome (WNS) that is killing so many bats. WNS is a fungus that attacks the muzzle, nose and ears and is spread from bat to bat The fungus somehow causes the animal to wake up during its winter hibernation.Consequently the bat starves or freezes to death after using up its stored winter fat. It is responsible for millions of bat deaths over the past several years. What some people may not know is the deaths caused by wind turbines. I always thought wind turbines were a good idea, a green energy source. I am mesmerized by their size and stately figure as the huge blades rotate.

The downside is they are killing bats . There have been more bat deaths around wind farms than bird deaths.It's a mystery why the bats are dying. One theory is that the vibration from the turbines causes the bats' lungs to rupture

Some scientists estimate that by the year 2020, 33,000 to 111,000 bats will be killed annually by wind turbines at the Mid-Atlantic Highlands alone.The cumulative impact of the loss is devastating. If 25 bats are killed by one turbine in a year, that turbine is responsible for about 17 million bugs every year that would have been eaten during the bats’ lifetime

The total loss of bats in North America, the cost to agriculture could be more than $3.7 billion a year. Some say that estimate is too low.

It’s not just the deaths that are the problem, but that bats are slow to reproduce, most having only one offspring a year. The populations could take decades to recover, if they do at all. Some species are expected to become extinct.

How Do You Feel About Bats?

What Can We Do?

There are some things we can do now to help bats.Some are as simple as putting up a bat house.

Bat Habitat Bats need more than a roost. They need a place to forage for insects or nectar. They also need fields, forests, marshes and chaparral.They need water. Permanent wet areas are critical for bats. You can find a local group working to save habitat in your area.

Adopt a bat Bat Conservation International has several programs to support bats. They sponsor conservation and save thousands of bats a year.

Don't trim your palm trees At least two species roost under dead palm fronds, the western yellow bat and the big brown bat. Cosmetic trimming is one of the biggest threats to the Western yellow bat. Not only does trimming eliminate potential roosting places, but if done during the months of May through September, it may actually injure the babies. Birds like the orioles also nest in palm fronds. You can put up a predator guard around the tree to protect the bat pups and bird chicks.

Keep cats indoors Domestic cats are not a natural predator in the Western Hemisphere but were brought over by settlers.There are an estimated 60 million cats kept as pets in the US. If each cat kills only one bird a year that would come to 60 million birds every year. That would account for more bird deaths than any oil spill. Scientific studies actually show that cats kill hundreds of millions of migratory songbirds and small mammals, including bats each year.

Prevent Drownings Bats must drink water. They can loose up to 30% of their body weight by evaporation in a night. Often, birds as well as bats, drown in pools and livestock tanks. They could survive if there was a way they could get out of the water. I've often floated a board in my animals' water tanks to keep small animals from drowning. Here's another nifty solution, below, the Froglog.To provide save water for bats, visit Water for Wildlife.

And not just mosquitoes. They do an amazing job of keeping the insect population down.

Bats really are interesting creatures. Without them we'd be overrun with mosquitoes.

Thanks for the compliment. I've never feared bats either, but didn't know too much about them. I love researching things like this.

This is a wonderful article. Thanks for writing it. I have never feared bats and like to see them soaring around at night.

Thanks. Yes, I was shocked too. Even when we think we are doing a good thing, there are repercussions that we don't think about.

I'd put out water, but I'm right on the lake. They can probably get plenty there.

Aw the poor bats, they are so beneficial to us humans. I do hope the bat advocates save them. :)K

Not everyone knows about the Scottish Wildcat, or Highland Tiger as it is som...

A glimpse of the Arizona desert wildlife and not so wild life, that I see from my back door.
100%  21   11 Ragtimelil
Other Wild Animals Not everyone knows about the Scottish Wildcat, or Highland Tiger as it is sometimes called, but they are in grave danger.
Loading ...
Error!