What the Heck is Nutritional Yeast?

What exactly is nutritional yeast? Where can you find it? And how good is it for your health?

Nutritional yeast is a fairly widely known foodstuff among the vegetarian and particularly vegan community, as it's often used as a dairy substitute.

However, it's not something everybody will have heard of.

And, let's face it, it doesn't sound like the most appealing ingredient.

So, what the heck is nutritional yeast?

Is Nutritional Yeast the Same as Bread Yeast?

The short answer is 'no', although it is essentially the same stuff. Have I confused you?

Well, let's see if we can look at it another way. Nutritional yeast doesn't smell or taste anything like the yeast used to make bread rise or turn sugar into alcohol in beer. However, it is a 'deactivated' form of yeast.

Now, I realize this still doesn't sound like overly tasty stuff, but by deactivating the yeast, what's created is something that tastes a little nutty, creamy and cheesy.

How is Yeast Deactivated to Make Nutritional Yeast?

This is a much simpler question to answer. Yeast is deactivated by 'killing' it with heat, which is done after it has been allowed to grow. This 'dead' yeast - I'm sure that'll have some omnivores screaming, "hypocrite" at the vegetarian and vegan community (for anyone who feels the urge to say it, yeast is a type of fungus) - is then ground into powder, which resembles cornmeal, or crumbled into flakes, which look a bit like fish food.

That all seems simple enough, so you may be wondering if it's possible to make nutritional yeast at home. While it is, theoretically, possible, the species of yeast used for making nutritional yeast may be harder to get hold of than traditional bread or brewer's yeasts.

Nutritional yeast is usually made from Saccharomyces cerevisiae, and could take up to a week to 'culture'. It's also worth bearing in mind that many branded nutritional yeast products come fortified with vitamin B12, which should make them the best choice if you're purchasing nutritional yeast for its many health benefits.

What is Nutritional Yeast Used For?

As mentioned above, nutritional yeast has a cheesy flavor. Unsurprisingly, therefore, it's often used to make vegan 'cheese' or as a substitute in dishes, like lasagne, mac 'n' cheese or on top of pizzas.

However, it can be used for many other things, and can even be eaten alone. Some of the most popular uses for nutritional yeast include, shaking on top of popcorn, in mashed potato or on roasted vegetables to offer that creamy flavor.

There are endless ways nutritional yeast can be used, just take a look at some of the titles below.

What are the Health Benefits of Nutritional Yeast?

Although it doesn't sound like it offers much in the way of healthy goodness, nutritional yeast ain't called 'nutritional' for nothing.

Full of protein and amino acids, nutritional yeast is particularly beneficial for those on a vegan or vegetarian diet. Moreover, it is full of vitamins, including the all important B vitamins. And, as mentioned above, many brands of nutritional yeast are fortified with B12, which is a great little vitamin that we humans rarely consume - unless in foodstuffs fortified with it.

Where Can You Buy Nutritional Yeast

The good news is, if you haven't got a good health food store near you, there are a large number of online suppliers, who offer an array of branded nutritional yeast products, like the ones listed below.

If You'd Like to Learn More About the Vegan Diet

Where Do Vegans Get Their Calcium?
Think cow's milk and dairy products are the only way to ensure strong, healthy bones? Think again!

5 Crazy Myths About Veganism
There’s a general opinion that vegans are a bunch of pasty-faced, undernourished, eccentric hippies. However, none of these stereotypes is accurate.
Updated: 01/30/2013, WiseFool
Thank you! Would you like to post a comment now?
10

Have You Ever Tried Nutritional Yeast? Would You Like to?

Hi Correen, I highly recommend it! It's an incredibly versatile thing, and I even like it on its own - although I'm sure that's not to everyone's taste.

Yes, I bought some at a health food store just because it was something I had never heard of. I've used it on popcorn so far.

Hey, Catana. I don't that it's a fad per se, it's just one of those things that's starting to become more widely known - in part because veganism is growing. I've read a lot of people like to put it on popcorn, that's not something I've ever tried, but I'll have to give it a crack. That many people can't be wrong!

Hey, Burntchestnut! How did that go down? Did you notice much of a flavor?

I bought some at a health food store, just because I like to try new things. All I've done with it so far is sprinkle it on popcorn.

Yes, it does seem to be a recent fad. It is worth looking into, though. Which you did :)

Hi, Mira. It's something that a lot of people either don't know about at all or have heard of, but are unsure what it is. I only came across it over the last couple of months - and, if I hadn't been looking for vegan 'cheese' recipes, I still wouldn't know about it. But I think it's a bit of an undiscovered gem. Glad you found the info useful.

I've heard of it but didn't really know what made it different from yeast, so thanks for this page!

Hey, Jo. I highly recommend you do. It has so many great uses and, if you want to cut down on the amount of animal fats you're eating, it's a great replacement for cream and cheese in various recipes. If you do give it a whirl, be sure to let us know what you think.

I've seen this in the stores and, as a vegetarian, vaguely thought it might be useful. But I dismissed it as 'something to do with making bread' and never looked too closely. I might check it out now. 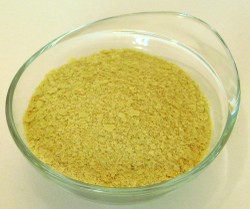 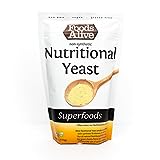