What Were the Difficulties in Governing Russia in 1900?

At the beginning of the twentieth century Russia was still a backward country ruled over by an autocratic Tsar. A number of practical problems contributed to the difficulties of governing this vast land.

The main difficulties were:

The Size of the Russian Empire in 1900

From east to west the Russian Empire spanned over 4,000 miles and from north to south, approximately 2,000 miles. It measured one-sixth of the world’s total land mass.

The frozen tundra, miles of impenetrable forests, huge areas of grassland known as the Steppes, as well as the desert areas to the south, made up the complex features of the Russian landscape. In addition, each location had its own, often harsh, climate.

In 1900 governing such a land and its varied inhabitants was a bureaucratic and technological nightmare.

In addition, Russia’s industrial backwardness meant that movement between towns, cities and rural communities was fraught with difficulties.

Roads in Russia were extremely primitive outside of the large cities. Major centres like St Petersberg and Moscow might boast paved roads but in the provincial towns rutted earth, which      turned to mud, was the norm.

Roads were often blocked and even when clear, travel was slow and tedious.

Since many of the main towns and cities were situated  near rivers, steamboats were a popular means of transport for people taking long journeys.

In particular, the River Volga played a vital role in the movement of people from Moscow to cities as far as Astrakhan.

In winter, when the rivers froze solid, sleighs replaced boats.

It's interesting to note in the painting above by Repin that the barge is being hauled by human power whilst in the very distance there is a steamboat visible by the smoke from its funnel.  A commentary perhaps by the artist on the waste of resources by the state and a disregard for the welfare of its citizens?

Books About Travelling Across Russia

Although there had been a railway boom in the 1890s, by 1900 Russian railways were still confined to European Russia. This was the main agricultural area where the population was greatest.

The exception was the Trans-Siberian railway. Work began on this route in 1891 and the last stages were completed in 1904. It ran from Moscow in the west to Vladivostok on the east coast.

The journey took more than a week, yet  proved vital in opening up the Siberian wilderness to settlement and  trade, in a similar way to the development of the American west.

Books About the Trans-Siberian Railway

The People of the Russian Empire in 1900

In 1900 the Russian Empire was made up of approximately 150 million people. The majority lived west of the Ural Mountains, in European Russia, and had developed a deep pride in their customs and religion.

However, less than half the population of the Empire regarded themselves as true Russians, belonging to nationalities conquered by the European Russians of the west. They had their own languages and cultures.

Therefore, a major problem in governing Russia at this period was the deep resentment amongst many of the national groups towards their conquerors. A policy of ‘Russification’ (being forced to speak Russian, wear Russian clothing and adopt Russian customs) brought about widespread dissatisfaction.

Areas such as Finland, Poland and Latvia were overseen by Russian bureaucrats who ensured the Russian language was spoken in key areas such as law courts, schools and in local government.

In addition to seething resentments, divisions between national groups themselves exacerbated the situation.

The Cossacks were an exception.

Their skills at fighting on horseback made them invaluable to the Russian government. They were rewarded with land in return for service in the army and, as a result, were extremely loyal to the Tsar.

Books About the History of Russian Groups

were all contributing factors to the difficulties of governing Russia in 1900.

Despite a vast network of spies, informers, police and army officials spanning the Russian Empire, Tsar Nicholas II would find it increasingly difficult to cling to power.

The spectre of revolt was ever present.

It fascinated me to see just how many people were subject to 'Russification'. Great article. Thank you.

I would love to do the Trans Siberian railway too - going to Russia was something I had always wanted to do - it was a great experience. so glad you found the article interesting. Thanks for your post! :-)

It was definitely a time of poitical and social turmoil leading eventually to one of the most important turning points of the 20th century. Great article. I enjoyed in particular the Trans-Siberian Railway and the suggested books. It is one of the my most promonent bucket list entries :) I just hope one day to take the ride! 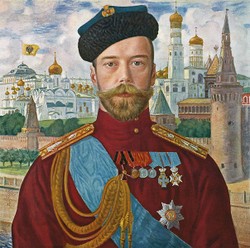 A Journey to the End of the Russian Empire (Penguin Great Jour...
38%  2   4 KathleenDuffy
Biographies and Memoirs