Why do buses bunch?

You wait half an hour for a bus and then three come along at once. But why?

The trend for buses to bunch rather than continue a journey at evenly spaced intervals has frustrated passengers for years. They leave the depot spread out, so why do they return together? Here, Steve Rogerson looks at the mathematics behind this phenomenon and explains how the problem can be alleviated.

The way buses seem to travel in packs has become a bit of a joke on British roads. The old saying that you wait half an hour for a bus and then three come along at once would be funny if it wasn’t true so often. But why does this happen? The buses usually leave the depot or the terminus at fixed intervals, so why do they end up bunching together? A quick look at the maths of this should provide a clue.

Take five buses – call them A, B, C, D and E – that each set off on the journey at exactly ten-minute intervals. For the purpose of this, I am assuming that the flow of passengers to bus stops is fairly constant. I know that it isn’t but the assumption allows us to see the mechanism of why the buses bunch. Individual journeys, of course, will vary because of the passenger flow and traffic conditions but this example is here to show the trend towards bunching rather than predicting the behaviour of a set group of buses.

We start with the buses happily moving along at ten-minute intervals. Now let’s say something happens to bus C that delays it by one minute – a particularly long queue at a bus stop, a particularly slow passenger, a traffic situation, all fairly everyday occurrences, but a one minute delay should not seriously impact the flow of buses, but it can and here is why.

The one-minute delay now means the gap between A and B is still ten minutes, between B and C is now eleven minutes and between C and D is nine minutes. Assuming that steady flow of passengers, C will now be picking up 10% more passengers than B and 18% more than D. This means the gap between B and C will start to widen and between C and D to shrink.

When C has through this has lost another minute on B then the gap between B and C becomes 12 minutes and between C and D eight minutes. Now C is picking up 20% more passengers than B and 33% more than D. This makes C move even slower and D move faster, both at an increasing rate. Before long, C and D are moving together after a long gap from B.

An interesting thing now happens. Because C and D are moving together, they start to speed up as a pair. They can take it in turns picking up from bus stops, and one every now and again can miss a bus stop altogether. The result is that they start travelling faster then B and after a while catch it up. And now there are three buses together.

This meanwhile has a knock-on effect further down the queue. Because C and D are moving faster, the gap between them and E increases, meaning E has more passengers to pick up and thus slows down, reducing the gap between it and the next bus, which speeds up as a result and can thus lead to further bunching.

Can the bunching be stopped?

The bunching cannot be stopped altogether because, as shown, a slight delay can quickly lead to buses bunching. But it can be alleviated by making sure the drivers do not leave certain stops until a fixed time. In the example above, this would stop D speeding up when the gap between it and C started to decrease. And it would also stop the speeding up of the pair when C and D do bunch. This will maintain the gap between D and E. So, while this hasn’t stopped the initial bunching, it does help stop the knock-on effect further down the line.

Not convinced? Think about it next time you are waiting for a bus. You may have plenty of time.

It's convincing and interesting how you mathematically account for different departure times but overlapping arrival times for city buses.

An introduction to some of the concepts of more advanced mathematics. 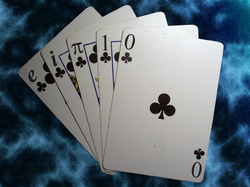 An introduction to some of the concepts of more advanced mathematics.
Loading ...
Error!