This fairy tale, also known as The wolf and the seven little goats or lambs or kids, is one of the most well-known fairy tales by brothers Grimm.

Wolf and 7 kids by Grimms is also one of the best examples of their belief of collective mind producing similar types of myths in wider areas of a specific region. Their collection was made with exactly that intention - to prove how people from different parts of today's Germany share similar stories, based on the same mythology. This kind of belief led ultimately to the formation of states like Italy or Germany.

Let's explore similarities of Wolf and seven goats with and old myth about Kronos eating their children in 10 steps!

(All used images are Public Domain!)

1. Cronus (or Kronos) was the youngest son of Uranus and Gaia.

He was the leader of the first generation of Titans and the ruler of so-called Golden Age. The Golden age is a mythological period when people lived peacefully, did only the right things, and didn't have to work for survival, because everything needed was already abundantly provided by Earth (Gaia).

Cronus became the ruler after dethroning his own father by a sickle or a scythe, given by his mother. She actually offered the tool to all Uranus' kids, but only the youngest (Cronus) got the guts to do the job - castrate his own father. And why Gaia wanted something like that? There are several retellings of the myth, but it seems the Uranus' decision to throw his (and Gaia's) sons Hecatonchires (three giants) and Cyclopes (another three giants) in Tartarus, because he was afraid of their power, made her angry.

If we compare some elements of the myth with a fairy tale:

- a sickle is given by the mother, just like the scissors were used by mother goat in the fairy tale;
- six siblings of the youngest goat were rescued from the wolf's stomach (dark prison), just like six siblings of Cronus are eventually rescued from Tartarus (deep abyss, part of an underworld, where nobody can see the sun);
- Uranus was defeated from the ambush, just like the wolf was attacked only after he felt asleep.

But the attack of the Cronus is only the beginning of the myth which apparently served as the base of the story about the wolf and seven little lambs.

2. Cronus was eating his children.

Why? He was informed about his fate - one of his own kids will dethrone him just like he did his father. To prevent this happening, he decided to eat all of his posterity right after the birth. This attitude was not welcomed by his wife Rhea (who was Cronus' sister, by the way), so she decided to trick him, just like Gaia tricked Uranus or the mother goat tricked the wolf. We'll turn to this moment later.

Right now it's important to note he was eating his own offspring like the wolf ate the young kids.

3. The name of Cronus is related with time - Chronos.

There is no clear evidence we are really dealing with the same name, but there are several interpretations, including Cicero's and Plutarch's that Cronus is actually a personification of the time, the cause and also the destroyer of everything.

For the purpose of our article it's obviously easier to believe them and point out one important detail from the tale about the little kids:

The youngest kid saved his life by hiding in a wall clock.

Such object, belonging to relatively modern times, is hard to find in other classic tales, what makes the assumption about the fairy tale as a retelling of a Greek myth only more believable.

4. Zeus was the youngest son of Cronus, just like the Cronus was the youngest son of Uranus. We know who is the leading protagonist in the wolf and seven kids, don't we? The youngest, of course! Just like in hundreds of other fairy tales, where the fight of the new against old, the future against the past or children against their parents is one of the major themes. It's just one of the life facts. Growing up always means some kind of revolt against the parents.

Zeus was not eaten by his father like his five (not six!) elder brothers and sisters. Sometimes he is presented as the oldest of all because his siblings were reborn when he saved them from the father's stomach. He was not eaten because his mother hid him. Hiding is a crucial part of tactics when we are dealing with a stronger opponent. And who can be stronger and more dangerous than the god who rules the universe (Cronus)?

The youngest kid in the fairy tales was also hidden and his hideout saved him life. Not only saved him, it helped to save the lives of all other little kids too.

5. The myth about Zeus has several variations about his childhood. One the best-known has a goat in an important role. A goat named Amaltheia raised Zeus - just like the goat raised the little kids in the fairy tale.

There's another interesting fact about Amaltheia. When Zeus grew up, he took one of her horns and felt it with fruit and nuts. This horn has a specific name: cornucopia (horn of plenty). It possesses magical powers because of it never empties.

The person who is in a possession of the horn of plenty will never suffer from hunger or thirst. This kind of abundance is presented in several different magical objects presented in many fairy tales. Table-Be-Set by Jakob and Wilhelm Grimm is one of the best examples. Aladdin and Magic Lamp from 1001 Night is not very different either.

We can mention another variation of myth about Zeus, where he was raised by a shepherd. The shepherd was promised his sheep were safe from the wolves. As you probably noticed, I have already mentioned the version of a fairy tale, where instead of kids wolf tries to eat the lambs.

6. Wolf's belly is opened by sharp scissors, what reminds us of the sickle from Cronus. Well, Zeus opens the stomach of his father too. Myths vary about the way how his siblings got out, some say a special potion was used, others claim Cronus' stomach was simply cut, but in the end, Zeus' brothers and sisters went out, just like in the fairy tale.

If somebody wants to know why Zeus saved only five siblings, while the mother goat saved six (the youngest was already out in both cases), we should know Zeus was born as a sixth and several older versions of the story about little goats mention there were only six goats altogether. It is very likely six changed into seven to improve the symbolism of the tale. With seven kids we can easily find a parallel with seven days of the week, swallowed by a night (presented by a big bad wolf), only to be reborn into a new week.

More about symbolism with short summary and more interesting facts about the wolf and seven kids:

7. We can't continue without mentioning The Little Red Riding Cap. In this tale, we also find out how wolf's victims didn't die, just like little kids didn't. If we understand this story as a symbolic presentation of a never ending fight between day and night, we also see the similarities with the wolf and the kids, just on a different level. Instead with one day, we are dealing with a whole week.

On the other hand, if we look back at the myth, it's obvious the swallowed children couldn't die. They are immortals after all!

8. In both stories about the wolf, stones play an important part.

9. What happens to Cronus in the end?

The punishment of child-eating Titan was simple - he was thrown into the underground, into the darkness, just like he threw his enemies. An eye for an eye, a dungeon for a dungeon. Just like Cronus 'imprisoned' his own children into the darkness of his stomach, the wolf swallowed the young goats. And just like Cronus ended in the sunless underground, the big bad wolf found his punishment in the deep well, where the sun never shines.

10. It's also a story about trickery.

Wolf is a presentation of older, stronger and primal powers. We can see the forces of nature of him, but we can also understand the wolf as a presentation of a father (little kids, just like Red Cap, don't have a father). The fight between bigger, stronger, older and smaller, weaker, younger opponent easily remind us of the fight between generations.

Almost all myths and almost all fairy tales solve such duels in one of two possible ways:

- with a help of a helper (often magical - think about the hunter in The Red Cap or the prince in The Sleeping Beauty or the fairy godmother in The Cinderella);
- with a trick (think about The Valiant Little Tailor or Puss in Boots or Hansel and Gretel).

We can find elements of both in Wolf and 7 kids, where mother represents a helper, but it's not her power or smartness which defeats the wolf. It was all his fault because he was too gluttonous and carelessly slept in front of the house just like the wolf in Red riding hood forgot about the necessary precautions. In both cases, something new replaced the old.

Reading both stories in this light we don't only find a consolation message (Tomorrow the sun will shine again), but an optimistic one too (Tomorrow will be better than yesterday). When we learn to understand the fairy tales this way, they open a whole new view on the world.

Can you add another parallel between Zeus dethroning Cronus and The wolf and seven young goats?

Thank you, DerdriuMarriner, I completely forgot about the Bulfinch. It seems seven is not a magic / fairy tale number for nothing!

Tolovaj, Very nice! The Myth of the Birth of the Hero by Otto Rank, from Bulfinch's Mythology on the levigilant website, mentions the seven children ordered to be killed by Matabruna, the mother of King Oriant of Flanders and mother-in-law of Beatrix. The seventh ultimately rescues his mother and siblings and wins against his grandmother. It serves as one of the variations on the Knight with the Swan saga covered by the Brothers Grimm and the Wagnerian opera Lohengrin.
Kinda sorta the same but kinda sorta different. 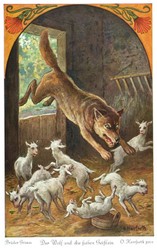 Rapunzel is a classic fairy tale which origins can be traced more than thousand years ago. Did Rapunzel really live?
74%  10   6 Tolovaj
Fairy Folklore

The princess made a promise to a frog and doesn't want to keep it. To her surprise, her father takes frog's side!
Loading ...
Error!