Once this law was enacted, statistics on immigration to the United States were more accurate.

Before 1819, ships arriving in the United States with immigrants just dropped the passengers off and went on their way. Now they would be required to furnish statistics on their passengers so the government could start to compile statistics.

The State Department compiled immigration statistics from 1820 to 1870, the Treasury Department took over to 1892. Since then the Immigration and Naturalization Bureau has compiled the numbers and issued regular reports.

After 1819, ships arriving at Atlantic and Gulf ports had to compile the following statistics. The ship’s captain had to furnish a list of passengers that included their age, sex, occupation and country of origin. Statistics on the passengers who died on the voyage also had to be included.

It wasn’t until 1850 that ships bearing immigrants to Pacific ports were included in the national statistics. During the Civil War, only Southern ports under Federal control provided statistics.

Of course, the United States had other territories and they were not included in the immigration statistics for decades. In 1871, Alaska immigrants were included in reports. It was 1901 for Hawaii, 1902 for Puerto Rico and 1942 for the Virgin Islands.

The immigrants that were counted were those that arrived by sea, the ones who came across a land border were not really included. There had been a few attempts, but the Civil War also disrupted this and it wasn’t considered a priority. More immigrants were arriving by ship than by land anyway. However in 1894, many European immigrants arrived at Canadian ports on their way to the United States. This passengers were included in the immigration statistics. In about 1904, border station started to be established and common by 1908. 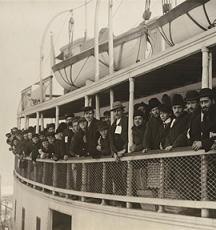