The invention of corn flakes and the birth of a new American breakfast.

What did people eat before corn flakes? Well, before refrigeration, many people ate last nights leftovers, maybe adding some fried potatoes and buttered bread. Cold cereal was not on the menu. Scotland had introduced hot oatmeal porridge but it didn’t make it to the United States until the 1850’s. Ferdinand Schumacher , a German immigrant, who grew up on hot oatmeal wondered why it was not consumed in the United States.

In Europe ,oatmeal was soaked overnight and then cooked for up to 90 minutes the next morning. Schumacher thought it wasn’t popular because it was just to much trouble to prepare. So Schumacher developed a kind of oatmeal that didn’t need to be soaked or cooked for more than several minutes. He was quickly dubbed the Oatmeal King of America and his produced flew off grocers shelves.

The American breakfast was typically a pretty heavy affair, men were doing manual labor and needed lots of fuel. I remember reading Farmer Boy by Laura Ingalls Wilder and being shocked by the amount of food Almanzo at every morning. A typical Wilder breakfast was fried potatoes, pancakes, sausages and gravy, donuts, apple pie and oatmeal with cream and maple sugar. This kind of breakfast took a long time to prepare and a long time to eat.

But America was changing, less people did manual labor and they had less time for breakfast. Also, since less people grew their own food and meat, a typical farm breakfast became rather expensive. Hot cereals did grow in popularity, but had the stigma of being products for the poor.

In the early 1890’s, Henry Perky heated and softened wheat berries and drew them through rolles, making Ceres cereal. These biscuits didn’t sell that well until he renamed them Shredded Wheat and publicized them at the 1893 World Columbian Exposition.  The wheat biscuits also made their way to Battle Creek, Michigan.

Battle Creek was the home of the Battle Creek Sanitarium run by John Harvey Kellogg. The sanitarium tried to help people regain their health through exercise and various therapies. His health institute also pushed a vegetarian diet and he needed a good breakfast substitute for sausages and eggs. Shredded Wheat was served but Kellogg soon started experimenting with his own grain products.

John and his brother Will discovered that wheat could also be flattened and flaked, the resulting product was named Granose.  After Will Kellogg quarreled with his brother, he left the Sanitarium and founded the Kellogg Toasted Corn Flake Company. The brothers agreed on the benefits of the grain cereal, but later fought about adding Will’s decision to add sugar to their popular corn flakes.

Charles W. Post visited the health resort and left still in poor health. But he had an idea to found a cereal company.  John Kellogg allowed the guests to observe the flaking machine in action so Post copied the process. His company, Post Cereals, also developed Grape Nuts. Another early product was a coffee substitute made out of grain called Postum. His company grew to be General Foods.

Soaking overnight and 90 minutes of cooking makes me wonder what did they eat when they were waiting for this meal:)
Nice introduction to history of cereals. I bet there is a lot of juicy stories behind and I am looking forward to see another article on similar subject.

From the time I was a small child, I've always eaten my breakfast cereal as a before-bed snack. In the morning I'm a bacon and eggs or ham and eggs kind of girl. Perhaps a hearty omelet. But I'd never thought about it's history. I enjoyed your wizzle a great deal. It was very well written and very interesting.

From the time I was a small child, I've always eaten my breakfast cereal as a before-bed snack. In the morning I'm a bacon and eggs or ham and eggs kind of girl. Perhaps a hearty omelet. But I'd never thought about it's history. I enjoyed your wizzle a great deal. It was very well written and very interesting.

This is lovely information. I first had Corn Flakes in the 1950s.In those days it was unknown in the Netherlands My uncle brought it back from the US and we called it 'oom Klaas pap', Uncle Klaas Porridge. 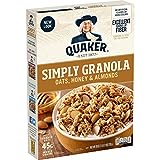